Occurrence, Distribution and Ecological Risk of Bisphenol Analogues in the Surface Water from a Water Diversion Project in Nanjing, China

Due to the widespread use of bisphenol analogues (BPs) as alternatives to bisphenol A (BPA), considerable attention for health risk has been shown in aquatic ecosystems. The occurrence and distribution of six BPs were researched in a soluble phase (<10−3 μm), colloidal phase (10−3 μm to 1 µm), and suspended particulate matter (SPM >1 µm) in a water diversion project of Nanjing, China. Except for bisphenol Z, all BPs were detected in two or three phases, where the total concentrations of detected BPs were 161–613 ng/L, 5.19–77.2 ng/L, and 47.5–353 ng/g for the soluble phase, colloidal phase, and SPM, respectively. Among the detected compounds, BPA is still the dominant BPs in the soluble and colloidal phases, which is followed by bisphenol-S , while bisphenol-AF was the major contaminant in SPM, followed by BPA. The mean contribution proportions of colloids were 1–2 orders of magnitude higher than SPM, which suggests that colloids have a clear impact on regulating BPs’ environmental behaviors. In terms of spatial distribution, the water diversion project could reduce the pollution levels of BPs, which might further affect the ecological security of the Yangtze River. View Full-Text
Keywords: bisphenol analogues; colloids; suspended particulate matter; environmental risk; water diversion project bisphenol analogues; colloids; suspended particulate matter; environmental risk; water diversion project
►▼ Show Figures 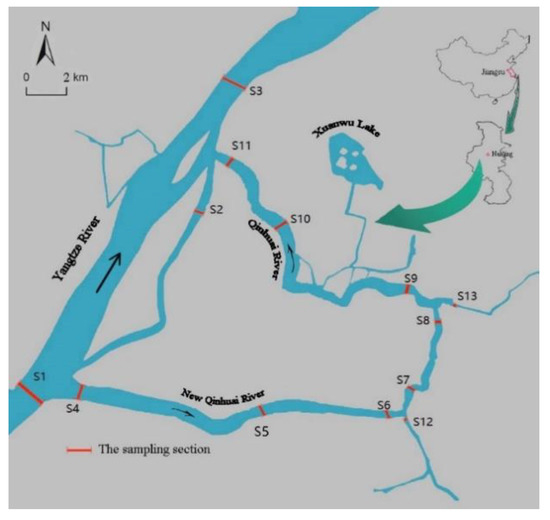