The Impacts of the Hierarchical Medical System on National Health Insurance on the Resident’s Health Seeking Behavior in Taiwan: A Case Study on the Policy to Reduce Hospital Visits

Risk of Dementia in Patients with Leptospirosis: A Nationwide Cohort Analysis

Leptospirosis, one of the most common zoonotic infections worldwide [1], is caused by a strain of the Leptospira bacterium. Leptospires are Gram-negative spirochetes that comprise 24 serogroups and more than 250 serovars. Although they are usually encountered in the tropics and developing countries [2], leptospirosis occurs worldwide through occupational hazards, recreational hazards, and waste hazards [3]. The clinical course of leptospirosis varies. Most cases are mild and self-limited or subclinical, whereas some cases result in Weil’s disease (the triad of jaundice, acute renal failure, and bleeding), hemolytic crisis, and multiorgan failure [4].
Dementia is a neurodegenerative disorder characterized by progressive deterioration in cognitive function. The major underlying pathologies are Alzheimer’s disease (AD), vascular dementia, frontotemporal lobar degeneration, and Lewy body dementia. AD is the most common form of dementia, occurring in 11% of the elderly population aged ≥65 years and 32% of the elderly population aged ≥85 years in the United States [5]. Vascular dementia is the second most common type of dementia, affecting 10%–50% of all dementia cases [6], with a prevalence of nearly 14.5% among US adults aged ≥65 years [7]. There is growing evidence that endothelial dysfunction and oxidative stress play a role in the pathogenesis of both forms of dementia [8,9,10]. Due to oxidative stress and endothelial dysfunction being crucial events in the pathogenesis of leptospirosis, leptospirosis may be a risk factor for diseases related to endothelial dysfunction, such as dementia. A previous study demonstrated the relationship between leptospirosis and acute coronary artery disease [11]. However, data on the relationship between dementia and infections are scant. Thus, we conducted a retrospective cohort study to determine whether leptospirosis is one of the potential risk factors for dementia.

The Taiwan National Health Insurance (NHI) program, launched in March 1995, contains the healthcare data of more than 99% of Taiwan’s population of 23 million [12]. The National Health Insurance Research Databases (NHIRD) are administrative databases containing the claims records from the NHI program [13]. The details of the NHIRD have been previously documented [14,15]. The NHIRD consists of de-identified secondary data released for research purposes. We used the identification of residents to link two data files: a subset of the NHIRD that included inpatient claims, and a registry of beneficiaries. All data files were linked to encrypted identifications to secure the privacy of the insurant. The Ethics Review Board of the China Medical University and Hospital in Taiwan approved this study (CMUH-104-REC2-115). The International Classification of Disease, Ninth Revision, Clinical Modification (ICD-9-CM) was used for defining the disease diagnosis codes.

Patients newly diagnosed with leptospirosis (ICD-9-CM code 100) from 2000 to 2010 were identified as the leptospirosis cohort. Patients in Taiwan suspected to have leptospirosis on the basis of possible exposure history and typical symptoms were studied by two methods: culture isolation and serological diagnosis [16]/ For culture of leptospira, blood was taken during the first 10 days of disease and urine was taken 10 days later since the onset of disease. For serological diagnosis, paired acute and convalescent sera were performed with a microscopic agglutination test (MAT). MAT is performed by incubating patient serum with various serovars of leptospires. MAT titer is obtained by testing various serum dilutions with the positive serovar. The serovar that reacts with patient serum is suggested to be the infecting serovar. A positive laboratory diagnosis of leptospirosis required one of the following two criteria: 1) culture isolation or 2) serological diagnosis by a four-fold rise in titer between the acute phase and the convalescent phase and a titer ≥ 1:400 in a single serum. Laboratory studies were all performed at Centers of Disease Control of Taiwan. The initial date of diagnosis of leptospirosis was set as the index date for estimating the durations of follow-ups. Patients with a history of dementia (ICD-9-CM codes 290, 294.1, and 331.0) before the index date, or missing information on age or sex, were excluded. A cohort of individuals with no history of leptospirosis was randomly selected from a population of insured people, at a case-control ratio of 1:4. Both groups were then frequency-matched according to age (every 5-y span), sex, and index year using the same exclusion criteria. All participants were followed until the day of diagnosis of dementia, censoring for loss to follow-up, death, termination of insurance, or December 31, 2011. Preexisting comorbidities included diabetes mellitus (ICD-9-CM code 250), hypertension (ICD-9-CM codes 401–405), head injury (ICD-9-CM codes 310.2, 800, 801, 803, 804, 850, 851, 853, and 854), depression (ICD-9-CM codes 296.2, 296.3, 296.82, 300.4, and 311), stroke (ICD-9-CM codes 430–438), and chronic obstructive pulmonary disease (COPD; ICD-9-CM codes 490–492, 494, and 496).

Distributions of sex, age (≤49 y, 50–64 y, and ≥65 y), and comorbidities were compared between the leptospirosis cohort and non-leptospirosis cohort and examined using the chi-square test. The mean ages of both cohorts were measured and compared using the Student’s t-test. The Kaplan–Meier method was used to assess the cumulative incidence of dementia between the leptospirosis cohort and the non-leptospirosis cohort, and their differences were estimated using a log-rank test.
We performed stratified and multivariate analysis to eliminate confounding effects [17]. The overall incidence densities and sex-, age-, and comorbidity-specific incidence densities of dementia (per 1000 person-years) were calculated for each cohort. Univariable and multivariable Cox proportional hazard regressions models were used for measuring the overall risk and sex-, age-, and comorbidity-specific risk of dementia associated with leptospirosis. Hazard ratios (HRs) and 95% confidence interval (CIs) were estimated using the Cox model. Further data analysis was conducted in patients with leptospirosis and a comorbidity, to evaluate the synergistic effect of both on the risk for dementia. All analyses were conducted using SAS Version 9.4 (SAS Institute, Cary, NC, USA). A p-value <0.05 was considered statistically significant.

In conclusion, our study revealed that patients with leptospirosis are at a 1.89-fold greater risk of subsequent dementia than the general population. It is important to ensure people with occupational or recreational hazards are aware of the risk factors, symptoms, and possible complications of leptospirosis. Future studies are needed to confirm this epiphenomenon.

All authors state that they have no conflicts of interest. 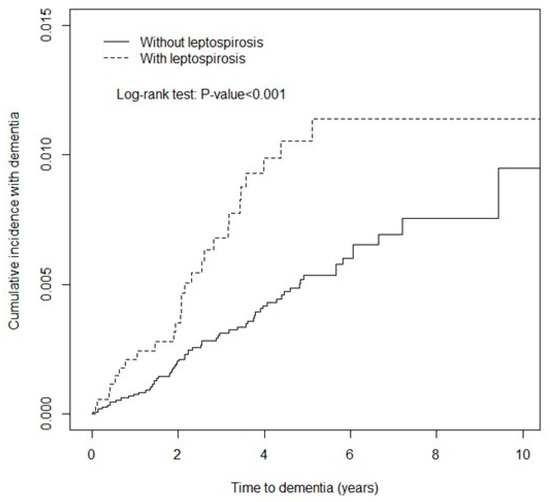 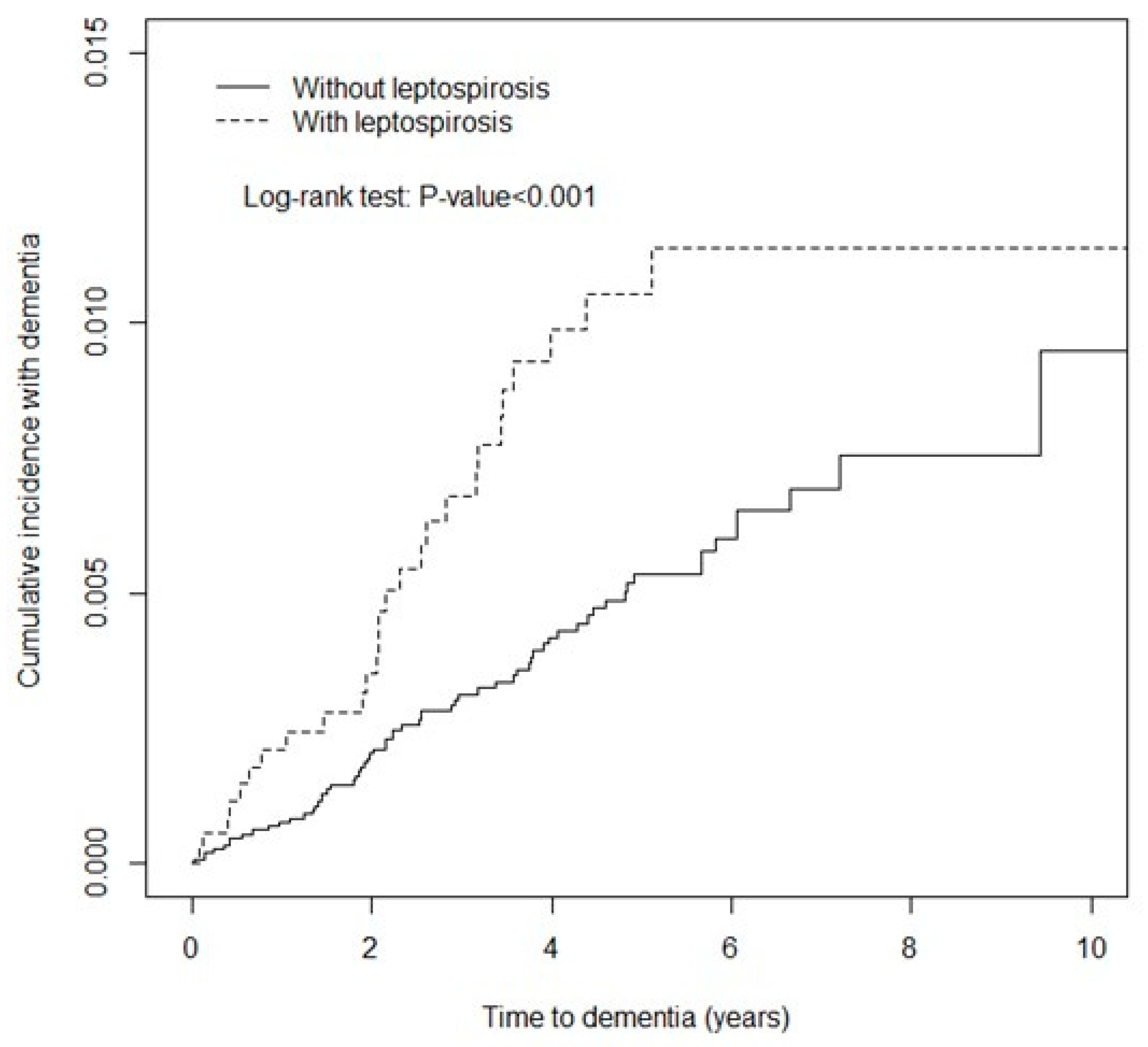