Environmental Influences on Food Behaviour
Next Article in Special Issue

Internet gaming disorder (IGD) is conceptualized as a type of mental disorder with symptoms of addiction, including preoccupation, tolerance, withdrawal, and continued use, despite negative consequences [1,2]. It is also defined as a type of behavioral addiction under the umbrella of Internet addiction [3]. There is a high prevalence of IGD among students of different ages across cultures [4,5,6,7,8,9]. According to a recent review [10], the prevalence of probable IGD ranged from 3.5 to 17.0% across the Chinese samples, and university students, in particular, were shown to be at very high risk, with prevalence as high as 8.8 to 9.6% [11]. Given its high prevalence and negative consequences (e.g., poor academic performance and sleep problems) [6,12,13,14,15], researchers have been allocating increasing attention to identifying the risk and protective factors of IGD [16]. Emotional intelligence was recently proposed as a potential protective factor [17,18,19,20], but only cross-sectional research has tested its buffering effects. We aimed to fill the current research gap by conducting a one-year longitudinal study to determine whether emotional intelligence is a predictor of IGD.
This study adopted the Interaction of Person-Affect-Cognition-Execution (I-PACE) model to explain the development of Internet gaming disorder [21]. The I-PACE model is a process model and it proposes that the development and maintenance of a specific Internet-use disorder is rooted in an individual’s core predisposing factors (e.g., capabilities and traits, such as the traits of emotional intelligence and impulsivity) that influence his or her affective and cognitive responses to situational triggers, which result in the deterioration of executive functioning. Based on the model, this research investigated whether emotional intelligence would predict IGD symptoms a year later, and whether depressive symptoms and/or coping flexibility mediated the relationship using a sample of Chinese university students, who are considered to be at high risk for IGD [2,6,22].

1.2. The Mediating Role of Depressive Symptoms and Coping Flexibility

According to the I-PACE model, individuals who have a greater affective vulnerability (e.g., psychopathology, such as depression and anxiety disorders), in combination with ineffective or even dysfunctional coping strategies (e.g., avoidant and inflexible coping styles), are more inclined to develop specific Internet use disorders because of their urge to regulate their mood in stressful situations [38,39]. A number of longitudinal studies have demonstrated the adverse effects of depression on IGD/Internet addiction [35,40,41,42,43]. Psychological distress, such as depression, may not only heighten one’s motivation to escape from real life, and thus increase one’s likelihood of engaging in the problematic use of online games [44], but it may also activate maladaptive coping with gaming and/or relationships online [38,40]. Given that trait emotional intelligence integrates emotion-related self-perceptions and dispositions, it is not surprising to find that it is negatively associated with depressive thoughts and depression [45,46,47]. Therefore, we hypothesized that trait emotional intelligence would predict fewer depressive symptoms, and in turn lower IGD tendency.
The use of the Internet, especially for the purposes of engaging in gaming and social media, is a common coping behavior when individuals face emotional or social difficulties [48,49]. Hence, coping style is considered to be a salient component of the I-PACE model [21]. Previous studies have shown that the use of avoidance and emotion-focused coping was positively associated with Internet addiction [38,39,50]. Another coping variable, which is relatively understudied, is coping flexibility. Defined as the cognitive capability to evaluate one’s current coping strategy, coping flexibility is the ability to select an alternative coping strategy if the current one is deemed to be ineffective and to produce a new coping strategy [51]. Based on the Dong and colleagues’ f-MRI studies [52,53,54], people with impaired executive functions are anticipated to be more vulnerable to Internet addiction. Following the same line, psychological inflexibility, which is one of the indicators of cognitive inflexibility, has been shown to be an antecedent of Internet addiction [55]. On the basis of both these findings and the I-PACE model, it can be reasonably hypothesized that coping flexibility, another indicator of cognitive (in)flexibility, is a protective factor for Internet-related addictions, including IGD. Coping flexibility has been shown to be a protective correlate of other addictive behaviors, such as alcohol use, not only in a cross-sectional study [56], but also in a longitudinal study [57]. To our knowledge, only one published study has tested and reported the positive correlation between coping flexibility and Internet-related addictions [58]. Further research on the effect of coping flexibility on IGD is warranted, whereas a negative association between coping flexibility and other mental disorders, such as depression and posttraumatic stress disorder, has been consistently demonstrated in cross-sectional studies [59,60,61]. As high emotional intelligence allows for effective monitoring and regulation of coping style from an affective perspective [62], it is anticipated to be positively associated with coping flexibility. Therefore, we also hypothesized that coping flexibility would mediate the effects of trait emotional intelligence on IGD tendency.

From April to May 2016, Chinese students who were 18 years or above and had gaming experience were recruited in the baseline study (Wave 1 [W1]) by convenience sampling. The potential participants were invited to take part in this study by filling out an anonymous questionnaire after the cessation of their classes in the general education program at a public university in Macao, China. A total of 469 students, aged 18 to 27 years old (M = 19.29, SD = 1.10, 58% female), voluntarily participated at W1 and completed the questionnaire with demographic items (i.e., gender and age) and psychological measures (i.e., IGD tendency, trait emotional intelligence, coping flexibility, and depression). After they had completed the questionnaire, they were asked whether they were interested in joining the follow-up study; if yes, they would provide their contact information (i.e., phone number and/or email address) on a separated sheet for further contact. A year later, 282 students (M = 20.47, SD = 1.15, 60% female) took part in the follow-up study (Wave 2 [W2]), and their IGD tendency, coping flexibility, and depression were reassessed.
At both W1 and W2, the participants were explained their rights in clear terms, including their ability to withdraw from study at any time without negative consequences and the study’s adherence to keeping their information confidential, in the written consent form before they filled out the anonymous questionnaire. A personal code, which was comprised of one’s birth date, mother’s surname, and birth order, was generated by each participant in W1 and W2 for case-matching purposes. The participants received a supermarket coupon (about 12.5 USD) as a token of appreciation for their participation at both W1 and W2. This study obtained ethics approval from the Research Ethics Committee of the corresponding author’s university before conducting the study (Ethical code number MYRG2015-00213-FSS and MYRG2016-00162-FSS).

IGD tendency was measured by nine diagnostic criteria listed in the fifth edition of the Diagnostic and Statistical Manual of Mental Disorders [2]. The participants responded to items regarding IGD symptoms (e.g., withdrawal symptoms when stopping engaging in Internet games; 0 = No, 1 = Yes) in the past 12 months. The total scores ranged from 0 to 9, with a higher score indicating a higher level of IGD tendency. Cronbach’s alpha was 0.86 and 0.80 at W1 and W2, respectively.

The Chinese version of the 16-item Wong and Law’s Emotional Intelligence Scale (WLEIS) was used in this study to assess participants’ emotional intelligence in terms of self-perceptions of one’s abilities regarding emotion appraisal, use of emotion, and the regulation of emotion [63,64]. A sample item is “I have good understanding of my own emotions.” Participants responded to items on a 7-point Likert scale (1 = totally disagree to 7 = totally agree). A higher mean score represented a higher level of trait emotional intelligence. Cronbach’s alpha for this measure was 0.92 in this study.

The 10-item Coping Flexibility Scale (CFS) was used to assess the extent of participants’ self-reported coping flexibility [65]. Participants responded to items (e.g., “If I have failed to cope with stress, I think of other ways to”) on a four-point Likert scale, which ranged from 1 = not applicable to 4 = very applicable. The mean scores were calculated, and higher scores indicated higher levels of coping flexibility. Cronbach’s alpha of this scale was 0.79 and 0.76, respectively, at W1 and W2 in this study.

The seven-item depression subscale in Depression Anxiety Stress Scale (DASS-21) was used to assess the depressive symptoms [66]. The participants rated items regarding how often they had experienced such symptoms (e.g., “I felt that life was meaningless”) over the past week on a four-point Likert scale, ranging from 0 = did not apply to me at all to 3 = applied to me very much, and higher scores indicated more depressive symptoms. In this study, the reliability of this scale was 0.89 and 0.82, respectively, at W1 and W2.

Participants were asked to state their age and gender in the questionnaires.

Attrition analyses, descriptive analyses, and correlation analyses (i.e., Pearson correlation and point-biserial correlation) were conducted with SPSS 24 (IBM, Armonk, NY, USA) [67]. The cross-sectional model was tested by a path analysis among the variables that were assessed at W1, including trait emotional intelligence (W1), coping flexibility (W1), depression (W1), and IGD tendency (W1), with IGD tendency (W1) being set as the outcome variable. Path analyses were further used to test a prospective model in which the predictive value of emotional intelligence (W1) on coping flexibility (W2), depression (W2), and IGD tendency (W2) was examined, after adjusting for IGD tendency (W1). We also assessed model invariance between two genders in the prospective model.
According to Hair et al.’s recommendation [68], the fit indices of good model fit include the comparative fit index (CFI > 0.9), the goodness of fit index (GFI > 0.9), root mean square error of approximation (RMSEA < 0.08), and standardized root mean square residual (SRMR < 0.08). In our analyses, a good model fit was indicated by a non-significant chi-square, with the relative chi-square (chi-square divided by degree of freedom) not over 3. Apart from these indices, the standardized coefficients were estimated with a 95% confidence interval based on the bias-corrected percentile method, with 10,000 bootstrap samples.

The findings herein provide empirical evidence for the I-PACE model, underscoring the notion that aspects of one’s core character combined with affective and cognitive factors may trigger specific Internet addictions, such as IGD. As hypothesized, emotional intelligence and coping flexibility may have a protective effect against the development of IGD tendency, whereas depression may increase this tendency, in both male and female university students. Among the study variables, depression was found to have the sole direct effect on IGD, whereas emotional intelligence and coping flexibility only had indirect effects on IGD through depression; therefore, interventions for IGD should also place emphasis on improving depressive symptoms. Moreover, the enhancement of emotional intelligence and coping flexibility would be potentially effective components of IGD prevention programs at universities. 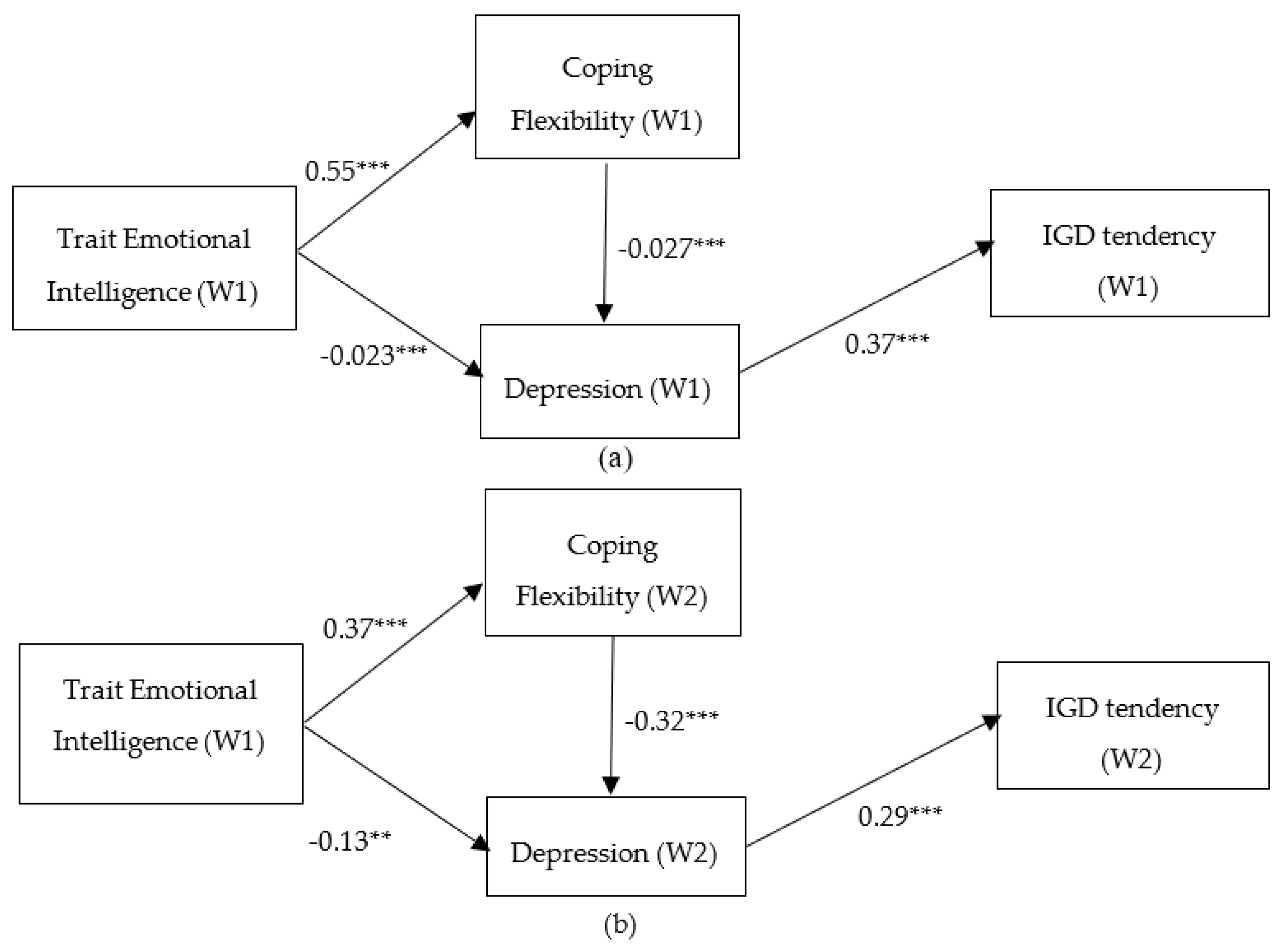