A Comparative Analysis of Lifetime Medical Conditions and Infectious Diseases by Sexual Identity, Attraction, and Concordance among Women: Results from a National U.S. Survey

Previous studies suggested that chronic loneliness may cause changes in the cardiovascular, immune, and nervous systems [1]. Additionally, the experience of loneliness can induce continual pain and is highly likely to turn into mental illness or exacerbate the psychological dysfunction [2,3,4]. Loneliness could be manifested through external behaviors, such as aggressive behavior [5], alcohol abuse and suicidal behavior [6]. Rokach et al. found that loneliness was influenced by age and culture background [7]. Segrin et al. proved that the reach of family influence on loneliness was still evident even if when considering more distal family relationships [8]. Interpersonal relationship is the most studied variable affecting loneliness. It is suggested that poor-quality relationships and loneliness were closely related [9], while Cheng et al. also indicated that interpersonal relationships were negatively correlated with loneliness [10]. These studies suggest the possibility of a strong association between interpersonal relationships and loneliness.
There are many types of interpersonal relationships, including interpersonal attachment, interpersonal rejection, and interpersonal sensitivity (IS). As a major measuring indicator of interpersonal relationships, IS refers to the propensity to perceive and elicit criticism and rejection from others [11], which serves as the ability of adaption to social function [12]. It has been well documented that IS is positively associated with depression [13] as well as a central feature of social anxiety disorder [14]. Currently, the association between IS and loneliness is still unclear. Related studies conducted to determine the correlations of IS found that parental over-protection could increase IS [15]. Existing research also indicated that a higher level of IS was associated with the lower quality of life and greater mental distress [16,17]. However, there was no relevant research reporting on the association between IS and loneliness. Additionally, relevant studies were mainly carried out among the young adults [17], school students [9,10], and the elderly [3,16]. Little attention has been paid to sexual minorities groups.
Research about gay men and/or lesbians was mainly conducted in developed countries. Previous studies on same-sex group usually focused on the cause of homosexuality [18], social support [19], sexual behavior [20], and sexual health [21,22]. In recent years, the focus has shifted to better understanding of mental health in the gay men and/or lesbians. However, few contributions exist regarding sex-related research from developing and underdeveloped countries and regions, such as Asia and Africa, because of history, religion and policy. Very little research exists on gay men and/or lesbians in China, with most Chinese researchers focusing on the spread and prevention of sexually transmitted diseases (STDs), such as HIV infection, particularly for those men who have sex with men (MSM) [23,24]. This leaves a huge gap in the literature regarding mental health amongst Chinese gay men.
Traditional Chinese culture highly emphasizes family inheritance and reproduction. Homosexuals, especially gay men may face greater misunderstanding and prejudice [25,26]. Thus, great pressure from society and family may be imposed on Chinese gay men. In addition, Chinese society is a ‘RenQing society’, which means Chinese people highly value interpersonal relationships. It could be hard for Chinese gay men to cope with pressures and discrimination in personal relationship. A survey revealed only 21% of Chinese accepted gay men and/or lesbians [27]. Moreover, China currently has no specific laws or policies to guarantee gay men’s legal rights [28]. Chinese gay men may confront with overwhelming social discrimination, family backlash and a lack of legal protection. We suspect that, under this social dilemma, Chinese gay men may be more likely to suffer from psychological problems [25,29], like IS and loneliness. Therefore, the purposes of this study were to investigate the reality and influencing factors of IS and loneliness among Chinese gay men, and to further examine the relationship between them.

2.1. Inclusion and Exclusion Criteria of Participants

Participants were recruited both online and offline. Respondents were recruited according to the following inclusion criteria: (1) males, (2) individuals who voluntarily participated in this survey, (3) self-identified as a gay. The exclusion criteria of potential participants were as follows: (1) male persons who engaged in sexual activity with other men, but did not sexually self-identified as gay, (2) bisexuals, (3) individuals who have been diagnosed with a mental illness.

The questionnaire used in this study consists of the following three parts:

Questions regarding demographics include participants’ age, household registration, education level, family structure, and monthly income. We also asked if the participant is the only-child in the family, and their years of self-identifying sexual orientation, number of current sexual partners and sexual orientation disclosure status.

The short-form UCLA Loneliness scale (ULS-8) contains 8 items selected from the revised UCLA Loneliness Scale of Hays and Dimatteo [30,31]. A 4-point Likert scale (1 = never, 2 = seldom, 3 = sometimes, 4 = always) was adopted and two items were reverse-coded prior to analyses. The ULS-8 was confirmed to have good reliability and validity by many scholars [32,33].

The SCL-90 intends to measure symptom intensity on nine different subscales, including somatization, obsessive-compulsive, interpersonal sensitivity, depression, anxiety, hostility, phobic anxiety, paranoid ideation, psychoticism. Ninety items of the questionnaire utilize a five-point Likert scale (1 = not at all, 2 = a little bit, 3 = moderately, 4 = quite a bit, 5 = extremely) [34]. The average scores for each item were reported with higher scores of the SCL-90-R indicating greater risk for mental health issues. Many Chinese scholars have proved good reliability and validity of the Chinese version SCL-90-R [35,36,37,38]. Our study adopted the dimension of IS (contains nine items), and the participants’ total average score of IS ≥ 3 was identified as positive.

All analyses were conducted using SPSS software, version 22.0 (SPSS Inc., Chicago, IL, USA), with a significance level of 0.05. Chi-square tests were used to explore the bivariate relationships between demographic factors (age, household registration, educational level, etc.) and IS. Multivariable logistic regression was conducted to analyze the influencing factors between IS and demographic characteristics. And t-tests were employed to detect the differences between each item (including total scores) of ULS-8 loneliness scale and IS detection. The multiple linear regression model adjusted for potential confounders, including educational level, family structure, one-child or not at home, monthly income, years of identifying sexual orientation, numbers of current sexual partners, disclose sexual orientation or not. Respondents also selected all possible dating practices and venues.

This study was proceeded on the basis of the Declaration of Helsinki. Permission was obtained from the School of Health Science IRB of Wuhan University (MS2017024). The China CDC also reviewed this study, and offered great help in the offline data collection process.

3.2. The Factors Affecting IS

3.3. Scores of Total Loneliness and Its Eight Items

3.4. Factors Associated with Loneliness, and the Relationship of Loneliness and IS

3.5. Measurement of Dating Practices and Is Detection Amongst Chinese Gay Men

The dating practices of Chinese gay men were presented in Table 5 and Figure 1. Almost half of the responses (46.78%) used the internet or dating apps, of whom 115 participants were screened positive in IS. Gay bar or dance hall was the second commonly selected venue. Only 6.45% of the responses indicated that their frequent meeting places were at bathhouses. The proportion of gay men who detected positive for IS in internet/dating app, gay bars/dance halls, tea house/clubs, bathhouses, parks/toilets/lawns, others was 36.86%, 47.52%, 48.75%, 44.18%, 46.55%, 38.36%, respectively.

This study first clearly reveals that IS and loneliness are positively correlated in Chinese gay men. We also found gay men who aged 25–29 and are the only-child at home could be more likely to be detected IS positive. College degree, monthly income over 7000 yuan and sexual partners are the protective factors of decreasing IS positive rates. The factors lead to loneliness for Chinese gay men are living in a non-nuclear family, being the only-child at home. While being a college student, having a higher monthly income, having sexual partners, opening sexual orientation can reduce the risk of loneliness of Chinese gay men. Results of this paper suggest that we need to be more aware of the Chinese gay men’s mental health, especially their feelings of IS and loneliness. To minimize the level of IS and loneliness, actions should be taken in the care for the Chinese gay men. The government should encourage everyone, especially family members, to give more support and humanistic care to Chinese gay men. The social environment should be more open and inclusive. Psychological counseling centers should be established to provide mental health evaluation. More dating sites should be built to increase the chance to attend group communication.

The lead agency of this study is Global Health Institute, Wuhan University. We would like to express our great appreciation to Ning Wang, a distinguished Professor from National Center for AIDS/STD Control and Prevention, China CDC, for he and his research team helped in data collection. We also wish to thank members of the Equality Research Society of Gender and Sexual Orientation, Wuhan University Medical Students’ Association, for their support and collaboration in forwarding and spreading our online survey links to the potential target population. Furthermore, we gratefully acknowledge the assistance and cooperation from the research participants who contributed their time and effort for this study. The authors would also like to thank Jiayi Zhou from Wuhan University, for her assistance in regard to the English language-editing of this paper. 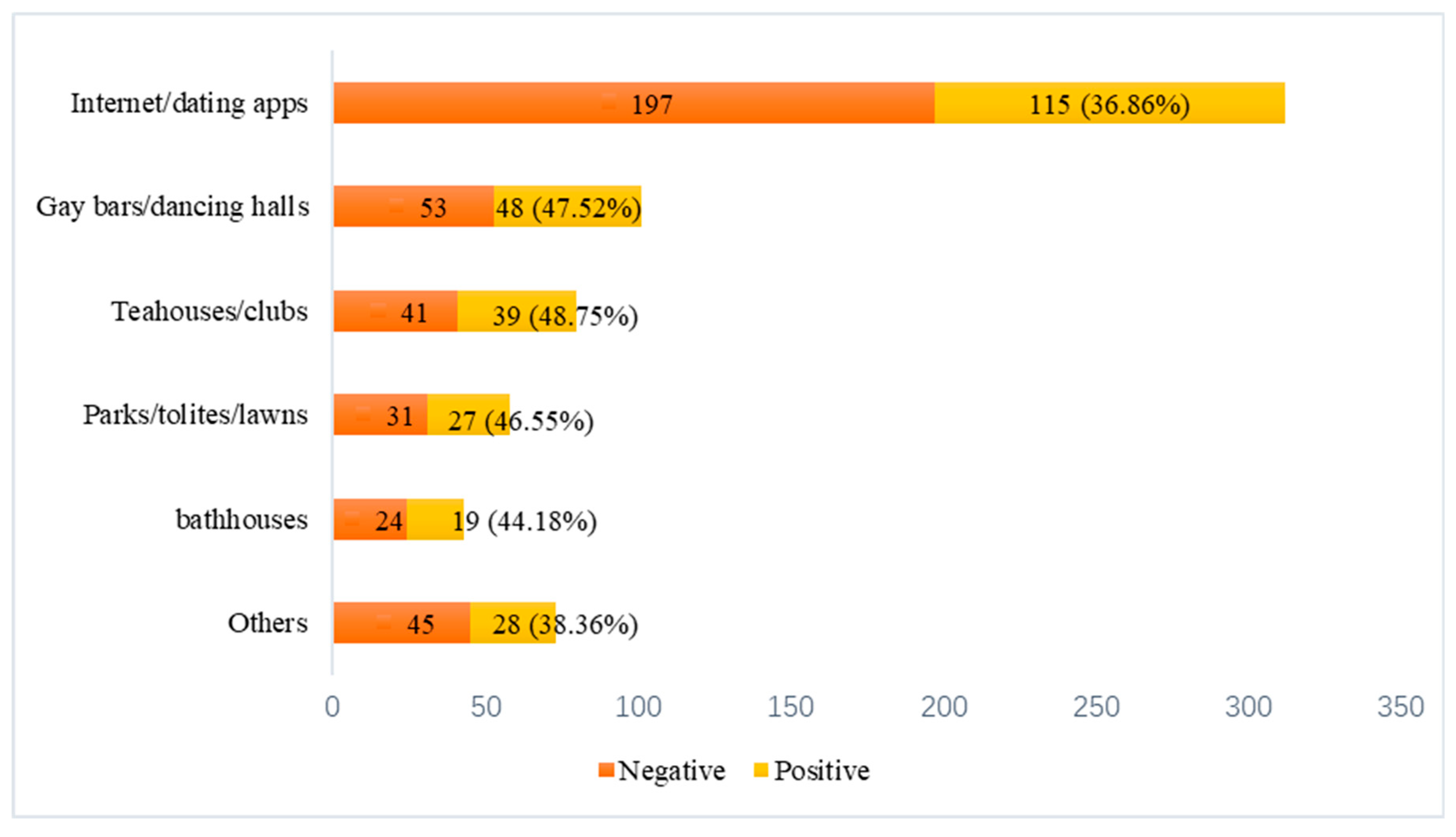