Telemonitoring and Quality of Life in Patients after 12 Months Following a Pacemaker Implant: the Nordland Study, a Randomised Trial
Previous Article in Journal

Recent studies have considered the connections between malaria incidence and climate variables using mathematical and statistical models. Some of the statistical models focused on time series approach based on Box–Jenkins methodology or on dynamic model. The latter approach allows for covariates different from its original lagged values, while the Box–Jenkins does not. In real situations, malaria incidence counts may turn up with many zero terms in the time series. Fitting time series model based on the Box–Jenkins approach and ARIMA may be spurious. In this study, a zero-inflated negative binomial regression model was formulated for fitting malaria incidence in Mopani and Vhembe―two of the epidemic district municipalities in Limpopo, South Africa. In particular, a zero-inflated negative binomial regression model was formulated for daily malaria counts as a function of some climate variables, with the aim of identifying the model that best predicts reported malaria cases. Results from this study show that daily rainfall amount and the average temperature at various lags have a significant influence on malaria incidence in the study areas. The significance of zero inflation on the malaria count was examined using the Vuong test and the result shows that zero-inflated negative binomial regression model fits the data better. A dynamical climate-based model was further used to investigate the population dynamics of mosquitoes over the two regions. Findings highlight the significant roles of Anopheles arabiensis on malaria transmission over the regions and suggest that vector control activities should be intense to eradicate malaria in Mopani and Vhembe districts. Although An. arabiensis has been identified as the major vector over these regions, our findings further suggest the presence of additional vectors transmitting malaria in the study regions. The findings from this study offer insight into climate-malaria incidence linkages over Limpopo province of South Africa. View Full-Text
Keywords: malaria; climate; zero inflated negative binomial regression; dynamical models; Mopani; Vhembe malaria; climate; zero inflated negative binomial regression; dynamical models; Mopani; Vhembe
►▼ Show Figures 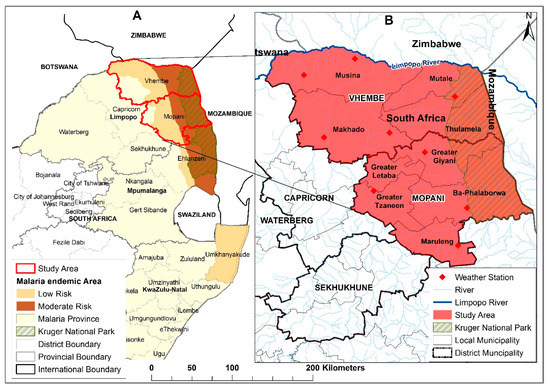