An Exploration of Hiking Risk Perception: Dimensions and Antecedent Factors
Next Article in Special Issue

Development and Validation of a Parent-Based Program for Preventing Gaming Disorder: The Game Over Intervention

Since the inclusion of gaming disorder in the fifth edition of the Diagnostic and Statistical Manual of Mental Disorders (DSM-5) as a condition for further study, there has been an increasing consensus that problematic gaming can be detrimental to mental health, yet efforts in preventing such problems from emerging have been limited. To address this gap, we developed the Game Over Intervention (GOI), a parent-based program designed based on the frameworks of ecological systems theory and self-determination theory. This study aimed to test the efficacy of the new program using the method of a randomized controlled trial, with the control condition being a program for effective learning. Participants were the parents of upper primary school students, with 163 (77% women; Mage = 42.70) and 199 (83% women; Mage = 41.82) partaking in the intervention and the control conditions, respectively. Participants rated their children’s gaming time, exposure to violent video games, and symptoms of gaming disorder at three time points: baseline, one week after intervention, and three months after intervention. The results indicate a general reduction in these three criteria across the three-month period. Our study provides tentative evidence demonstrating the effectiveness of the GOI in mitigating some gaming-related problems. View Full-Text
Keywords: addiction; compulsive gaming; intervention; pathological gaming, problematic gaming; prevention; video game addiction; compulsive gaming; intervention; pathological gaming, problematic gaming; prevention; video game
►▼ Show Figures 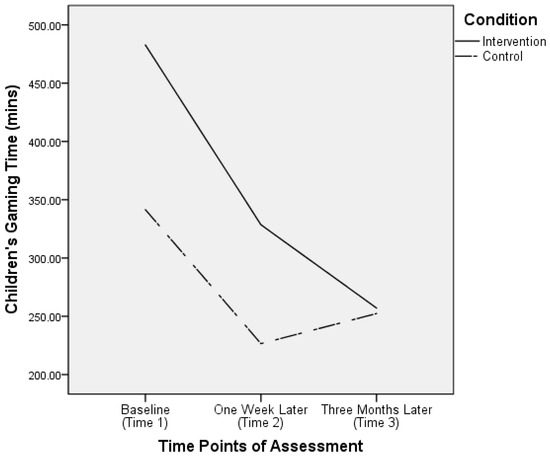 
Li, Angel Yee-lam, Chor-lam Chau, and Cecilia Cheng. 2019. "Development and Validation of a Parent-Based Program for Preventing Gaming Disorder: The Game Over Intervention" International Journal of Environmental Research and Public Health 16, no. 11: 1984. https://doi.org/10.3390/ijerph16111984