The Impact of Consumption Patterns on the Generation of Municipal Solid Waste in China: Evidences from Provincial Data
Previous Article in Journal

Non-Nutritional Use of Human Milk Part 1: A Survey of the Use of Breast Milk as a Therapy for Mucosal Infections of Various Types in Poland

The use of home remedies for the treatment of moderately severe ailments is a common practice in the Polish population. Currently, the topic of the potential non-nutritional properties of human milk is attracting the attention of breastfeeding mothers. This study was aimed at understanding lactating women’s knowledge, attitudes, and practices of non-nutritional breast milk on mucous membranes. The study was conducted among lactating women, who filled out a questionnaire consisting of questions about their knowledge and experiences with non-nutritional use of human milk. Statistical calculations were conducted with chi-square test and c-Pearson coefficient. A total of 1187 women were acted on, whereby 768 of respondents claimed to have knowledge of the non-nutritional use of human milk on mucous membranes, whilst 404 of them claimed that they had used at least one method. Among the most frequently used methods were the treatment of rhinorrhea, lacrimal canaliculi obstruction, and conjunctivitis. A correlation between length of breastfeeding (p < 0.001) and knowledge of non-nutritional human milk usage in prophylaxis and treatment of mucous membrane inflammation was found. Breastfeeding duration (p < 0.001) and parity (p < 0.005) were correlated with the application of those methods in practice. Due to a high propensity to testing those methods, parents’ education in the field of possible risks and importance of medical consultations is necessary. View Full-Text
Keywords: breast milk; milk therapy; mucous membranes breast milk; milk therapy; mucous membranes
►▼ Show Figures 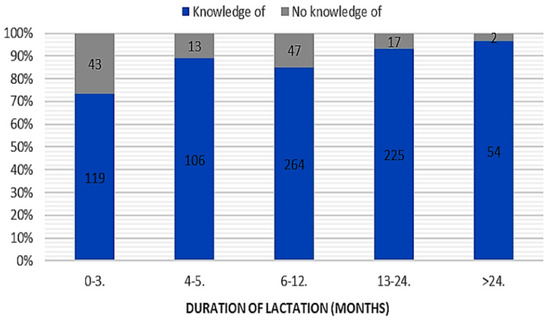 
Karcz K, Walkowiak M, Makuch J, Olejnik I, Królak-Olejnik B. Non-Nutritional Use of Human Milk Part 1: A Survey of the Use of Breast Milk as a Therapy for Mucosal Infections of Various Types in Poland. International Journal of Environmental Research and Public Health. 2019; 16(10):1715. https://doi.org/10.3390/ijerph16101715