Mortality from Homicides in Slums in the City of Belo Horizonte, Brazil: An Evaluation of the Impact of a Re-Urbanization Project
Previous Article in Journal

Socio-Economic Status and Health: Evaluation of Human Biomonitored Chemical Exposure to Per- and Polyfluorinated Substances across Status

Cardiovascular Disease Hospitalizations in Louisiana Parishes’ Elderly before, during and after Hurricane Katrina

The research on how health and health care disparities impact response to and recovery from a disaster, especially among diverse and underserved populations is in great need for a thorough evaluation. The time series analysis utilizing most complete national databases of medical records is an indispensable tool in assessing the destruction and health toll brought about by natural disasters. In this study, we demonstrated such an application by evaluating the impact of Hurricane Katrina in 2005 on cardiovascular disease (CVD), a primary cause of mortality among older adults that can be aggravated by natural disasters. We compared CVD hospitalizations before, during and after Katrina between white and black residents of three most populated parishes in Louisiana: Orleans and Jefferson, which were severely affected by the landfall and subsequent floods, and East Baton Rouge, which hosted many of the evacuees. We abstracted 383,552 CVD hospitalization records for Louisiana’s patients aged 65+ in 2005–2006 from the database maintained by the Center of Medicare & Medicaid Services. Daily time series of CVD-related hospitalization rates at each study parish were compiled, and the changes were characterized using segmented regression. In Orleans Parish, directly affected by the hurricane, hospitalization rates peaked on the 6th day after landfall with an increase (mean ± SD) from 7.25 ± 2.4 to 18.5 ± 17.3 cases/day per 10,000 adults aged 65+ (p < 0.001) and returned to pre-landfall level after ~2 months. Disparities in CVD rates between black and white older adults were exacerbated during and following landfall. In Orleans Parish, a week after landfall, the CVD rates increased to 26.3 ± 23.7 and 16.6 ± 11.7 cases/day per 10,000 people (p < 0.001) for black and white patients, respectively. The abrupt increase in CVDs is likely due to psychosocial and post-traumatic stress caused by the disaster and inadequate response. Inequities in resource allocation and access have to be addressed in disaster preparation and mitigation. View Full-Text
Keywords: equity; elderly; hurricane Katrina; cardiovascular diseases; segmented regression equity; elderly; hurricane Katrina; cardiovascular diseases; segmented regression
►▼ Show Figures 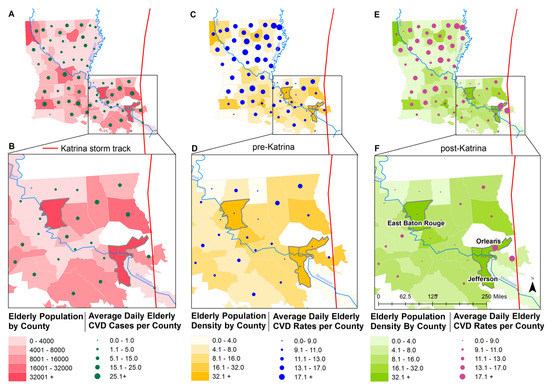