Epidemiology of Self-Reported Diabetes Mellitus in the State of Maranhão, Northeastern Brazil: Results of the National Health Survey, 2013

Namibia is known to have a high prevalence of tobacco smoking and alcohol consumption. Individuals who smoke are more likely to drink, and vice versa. It was reported that the individual rewarding effect of drinking and smoking were reported to be higher than when they are used at the same time. In this study our objective was to examine the individual and combined prevalence of drinking and smoking and investigate their sociodemographic correlates among adolescent and adult men and women in Namibia. This study was based on data from Namibia Demographic and Health Survey (NDHS 2013). Sample population were 14,185 men and women aged between 15 and 64 years. Self-reported tobacco smoking and alcohol consumption patterns were the outcome variables. Data were analysed using complex sampling techniques to account for survey design. Bivariate and multivariate techniques were used to measure the association between drinking and smoking with the sociodemographic factors. The prevalence of alcohol and tobacco use was, respectively, 53.1% (51.5–54.6) and 8.8% (8.1–9.5), and that of both drinking and smoking was 6.9% (6.3–7.6). In the regression analysis, several sociodemographic factors were found to be significantly associated with alcohol and tobacco use including age, area of residence, religion and educational status. Overall, women had higher rates of drinking alcohol; however, men had higher rates of engaging in high risk drinking. Men and women who reported drinking alcohol had, respectively, 2.57 and 4.60 times higher odds of smoking. Findings suggest that the prevalence of drinking was higher than that of smoking, with men having higher prevalence of high risk drinking. Men and women who drink alcohol were more likely to be smokers. The prevalence of both alcohol and tobacco use showed important sociodemographic patterns which need to be taken into consideration in designing prevention and intervention programs. Strategic tobacco control and smoking cessation approaches should pay particular attention to alcohol users. View Full-Text
Keywords: alcohol; smoking; Demographic and Health Survey; Namibia alcohol; smoking; Demographic and Health Survey; Namibia
►▼ Show Figures 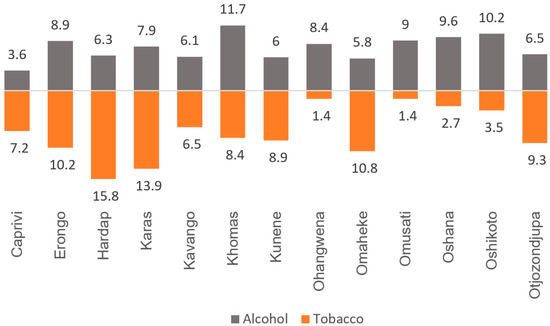 
He Z, Bishwajit G, Yaya S. Prevalence of Alcohol and Tobacco Use among Men and Women in Namibia. International Journal of Environmental Research and Public Health. 2019; 16(1):59.