Trends in the Incidence and Mortality of Diabetes in China from 1990 to 2017: A Joinpoint and Age-Period-Cohort Analysis
Previous Article in Journal

Use of a Modified DANP-mV Model to Improve Quality of Life in Rural Residents: The Empirical Case of Xingshisi Village, China

Despite the usefulness of artificial neural networks (ANNs) in the study of various complex problems, ANNs have not been applied for modeling the geographic distribution of tuberculosis (TB) in the US. Likewise, ecological level researches on TB incidence rate at the national level are inadequate for epidemiologic inferences. We collected 278 exploratory variables including environmental and a broad range of socio-economic features for modeling the disease across the continental US. The spatial pattern of the disease distribution was statistically evaluated using the global Moran’s I, Getis–Ord General G, and local Gi* statistics. Next, we investigated the applicability of multilayer perceptron (MLP) ANN for predicting the disease incidence. To avoid overfitting, L1 regularization was used before developing the models. Predictive performance of the MLP was compared with linear regression for test dataset using root mean square error, mean absolute error, and correlations between model output and ground truth. Results of clustering analysis showed that there is a significant spatial clustering of smoothed TB incidence rate (p < 0.05) and the hotspots were mainly located in the southern and southeastern parts of the country. Among the developed models, single hidden layer MLP had the best test accuracy. Sensitivity analysis of the MLP model showed that immigrant population (proportion), underserved segments of the population, and minimum temperature were among the factors with the strongest contributions. The findings of this study can provide useful insight to health authorities on prioritizing resource allocation to risk-prone areas. View Full-Text
Keywords: Artificial neural networks; geographic information system; hotspot detection; multilayer perceptron; Tuberculosis Artificial neural networks; geographic information system; hotspot detection; multilayer perceptron; Tuberculosis
►▼ Show Figures 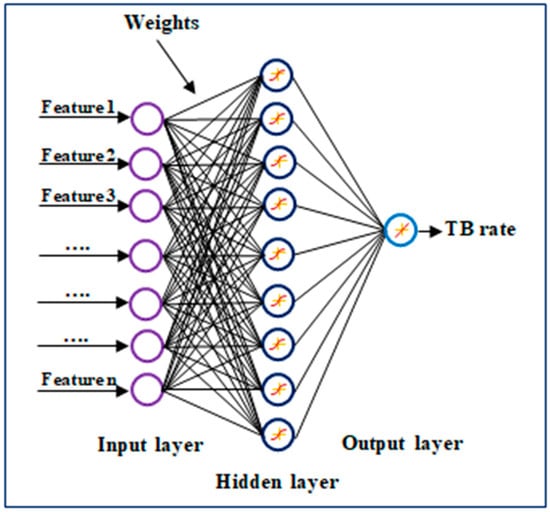