Exogenous glycinebetaine treatment is an effective measure for preventing crops from being exposed to drought and high temperature; however, the effects of this approach on the soil Cd uptake and accumulation by crops remain unclear. Pot experiments were conducted in this study to analyze the effect of glycinebetaine on the soil Cd uptake and accumulation by edible amaranth cultivated in Cd-contaminated soil. Results revealed that after exogenous glycinebetaine treatment on amaranth leaves during the vigorous growth period, the plant biomass, the Cd concentrations in the roots and shoots, and the Cd translocation factor (TF) were significantly higher than those of the control group. The highest Cd concentrations in the roots and shoots and the TF were higher by 91%, 96% and 23.8%, respectively, than the corresponding values in the control group. In addition, exogenous glycinebetaine treatment significantly increased leaf chlorophyll content and promoted the photosynthesis of edible amaranth. Consequently, the contents of soluble sugar, dissolved organic carbon, and low-molecular-weight organic acids significantly increased in the rhizosphere, resulting in Cd mobilization. Significant positive correlations were observed among the contents of leaf chlorophyll, Mg, Fe, pectin and Ca. Given that Cd shares absorption and translocation channels with these elements, we speculated that the increased leaf chlorophyll and pectin contents promoted the absorption and accumulation of Mg, Fe and Ca, which further promoted the absorption and translocation of Cd. These results indicated that exogenous glycinebetaine treatment during hot season would aggravate the health risks of crops grown in Cd-contaminated soils. View Full-Text
Keywords: lycine; high temperature; Cd; Amaranthus; chlorophyll; pectin lycine; high temperature; Cd; Amaranthus; chlorophyll; pectin
►▼ Show Figures 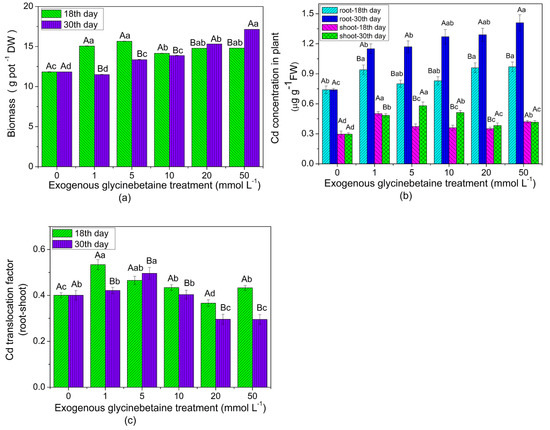