Perceptions and Reasons Regarding E-Cigarette Use among Users and Non-Users: A Narrative Literature Review
Previous Article in Journal

Use of Facebook by Hospitals in Taiwan: A Nationwide Survey

Specific pathogen-free 7-week-old male BALB/c mice were purchased from Charles River Laboratories Japan Inc. (Kanagawa, Japan) and acclimatized for 7 days before the start of the study. Animals were kept in a storage room at a constant temperature of 22 °C and illumination with 12-h light/dark cycles. Animals were fed standard animal chow daily and had ad libitum access to drinking water. The experimental protocols were approved by the Institutional Animal Care and Use Committee, Faculty of Medicine, Tottori University (protocol number 14-Y-46).

From 9 October 2015 to 30 October 2015, ambient PM was collected in Matsue city, the capital city of the Shimane Prefecture in southwest Japan. Total suspended particles were collected on a 20 × 25 cm quartz filter (2500QAT-UP; Tokyo Dylec, Tokyo, Japan) at a flow rate of 1000 L/min using a high-volume air sampler (HV-1000R; Shibata, Tokyo, Japan) for 23 h from 7 a.m. to 6 a.m. the following day. Before sampling, in order to remove endotoxins from filters, the filters were sterilized by dry heat at 240 °C for 30 min. After sampling, the 4-cm2 filter was detached and extracted with 4 mL of distilled deionized water and stored in a freezer at −20 °C to prevent growth of bacteria and fungi. For administration to mice, ambient PM was diluted with normal saline (NS) at an adequate concentration.

After the mice were anesthetized with isoflurane, their tracheas were cannulated. BALF was obtained following instillation of 5 × 1.0 mL of NS into the lungs, along with gentle handling to maximize BALF recovery. BALF from each mouse was centrifuged at 300× g for 5 min at 4 °C. The cell pellets were used for cell counts and the supernatants were used for cytokine analysis. Total cells diluted in Turk’s fluid were counted using a hemocytometer. The differential leukocyte count was obtained by microscopic evaluation and quantitative analysis of methanol-fixed cytospin preparations stained with Diff Quick (Fisher Scientific, Pittsburgh, PA, USA).

The concentrations of IFN-γ, IL-5, IL-6, IL-13, and keratinocyte-derived chemokine (KC/CXCL1) in BALF were measured by using enzyme immunoassay (EIA) kits (R&D Systems Europe, Abingdon, UK). BALF was diluted 1/5 to determine the concentrations of IL-5, IL-6, IL-13, and KC/CXCL1. For IFN-γ, it was used undiluted. All EIA assays were performed according to the manufacturer’s instructions.

Mice were euthanized by injection of pentobarbital. Lungs were inflation-fixed at 25 cm of water pressure with 10% formalin for 5 min and immersed in the same fixative. Tissues were fixed for 24 h at 4 °C and processed using standard methods for paraffin-embedded blocks. Fixed lung tissues were embedded in paraffin and each section was stained with hematoxylin and eosin (H&E).

Airway resistance measurements were acquired at FinePointe™ Non-Invasive Airway Mechanics (NAM) sites (Buxco Electronics, Inc., Wilmington, NC, USA) using conscious mice [25]. Prior to measurement, mice were acclimated for 15 min to the chambers. The chambers were also calibrated each time before data collection. Briefly, the nasal chamber in combination with the thoracic chamber allowed computation of sRaw. FinePointe™ software computed sRaw values with all other ventilatory parameters such as frequency of breath, tidal volume, minute volume, inspiratory time, and expiratory time derived by the NAM analyzer.

After the BALF procedure, whole blood was collected from the inferior vena cava. The blood samples were transferred into 1.5-mL tubes containing serum-separating medium (Bloodsepar; IBL, Gunma, Japan). After standing at room temperature for 30 min, the samples were centrifuged (3000 rpm, 10 min) and serum samples were collected. The samples were stored at −80 °C and transported on dry ice. All serum analyses were performed using a free radical analyzer system (FREE carpe diem, Wismerll Company Ltd., Tokyo, Japan) according to the manufacturer’s instructions. To analyze the serum levels of reactive oxygen metabolites, the levels of diacron reactive oxygen metabolites (dROMs) were measured. The results of dROM testing were expressed in arbitrary units (U. Carr), one unit corresponding to 0.8 mg/L of hydrogen peroxide as previously reported [26].

Data are expressed as mean and standard deviation (SD). Comparisons between groups were conducted by one-way analysis of variance (ANOVA) with Turkey’s post-hoc tests. Calculations were performed with GraphPad Prism ver. 5.02 (GraphPad Software, San Diego, CA, USA). A p-value < 0.05 was considered to be statistically significant.

3.3. Histopathological Changes in the Lung

3.5. Measurement of dROMs in the Serum

We measured dROMs in the serum to evaluate the implications of oxidative stress in airway inflammation increased by ambient PM exposure. Ambient PM exposure markedly increased the levels of dROMs in OVA/OVA/PM mice compared with control NS/NS mice (p < 0.05; Figure 6).
However, fluticasone propionate and tiotropium bromide had no effect on dROMs compared with OVA/OVA/PM mice. By contrast, both OVA/OVA+FORM mice and OVA/OVA/PM+FORM mice showed significantly increased dROM levels, raising the possibility that formoterol fumarate may increase rather than decrease oxidative stress (p < 0.05; Figure 6).

Tiotropium bromide, but not fluticasone propionate and formoterol fumarate, reduced bronchoconstriction and subsequently led to reduced neutrophilic airway inflammation augmented by ambient PM. Our data support the view that the positive effect of tiotropium bromide on asthma-related airway inflammation augmented by ambient PM can be partly attributed to its anti-inflammatory activity.

This research was supported by the Environment Research and Technology Development Fund (5C-1154 and 5-1453) of the Japanese Ministry of the Environment. 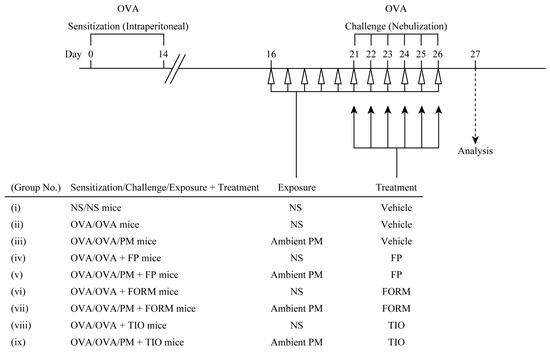 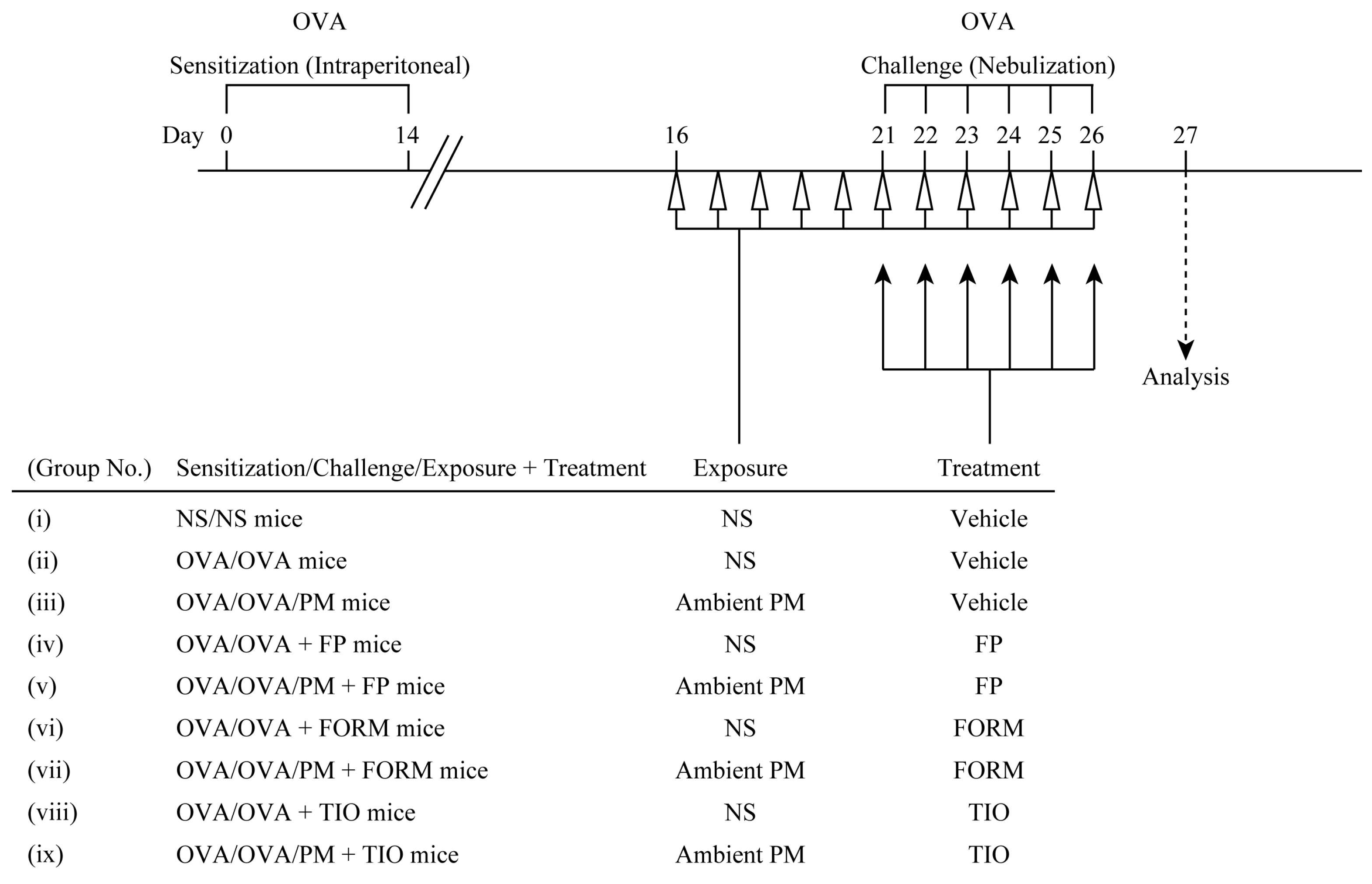 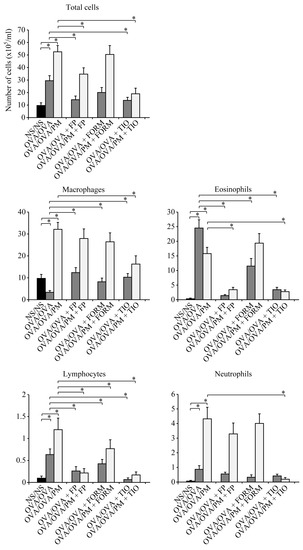 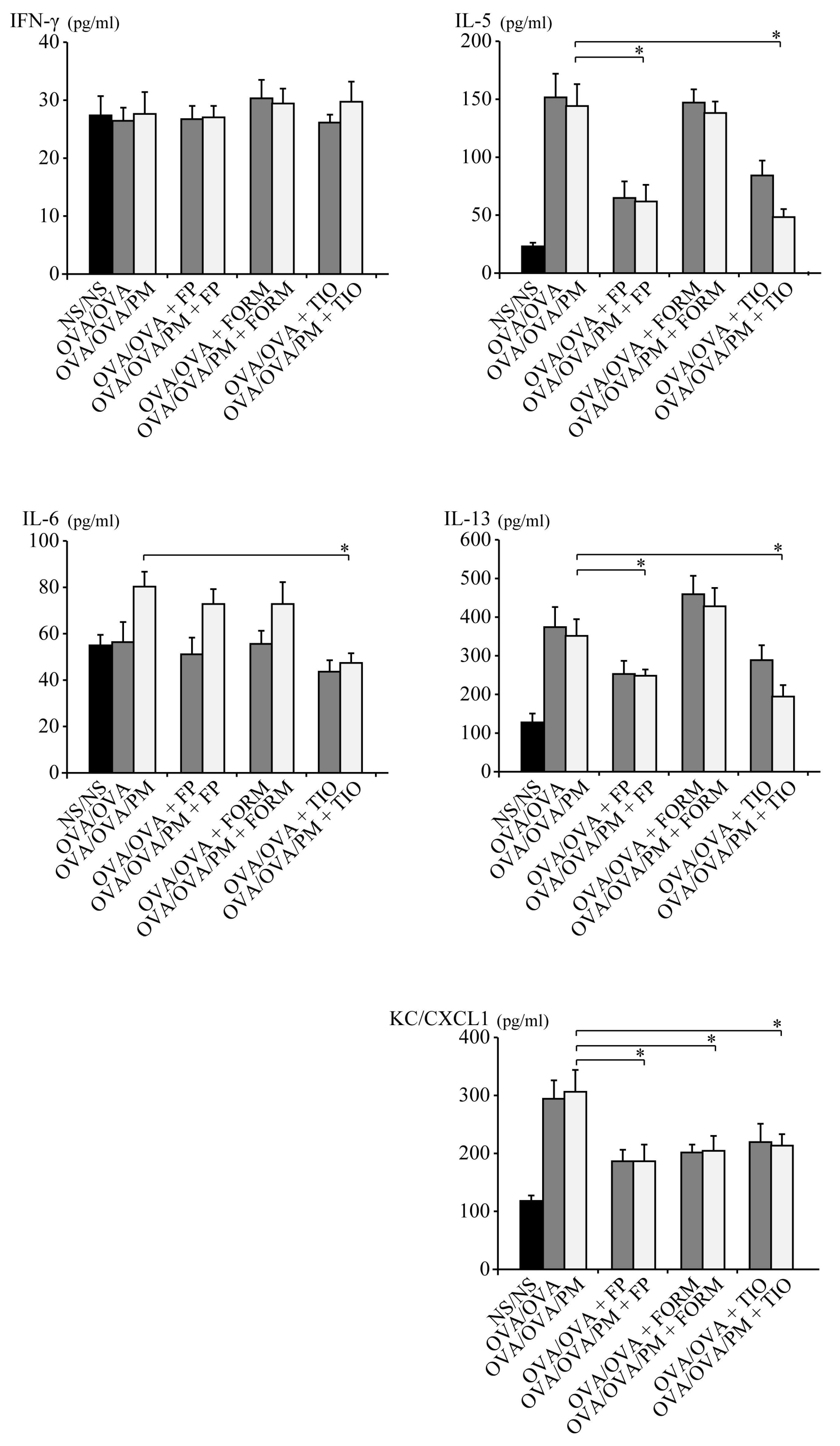 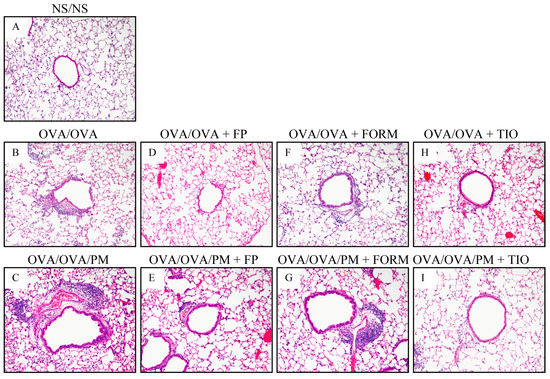 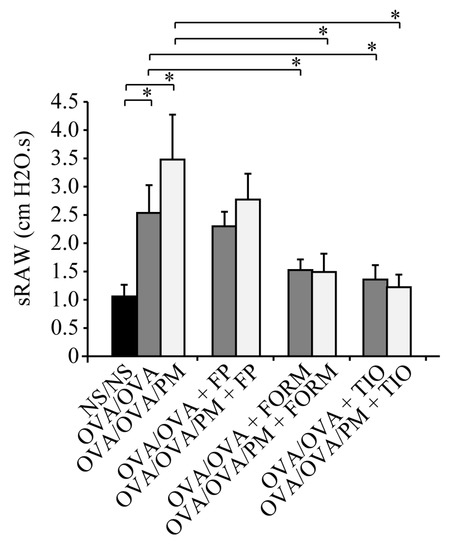 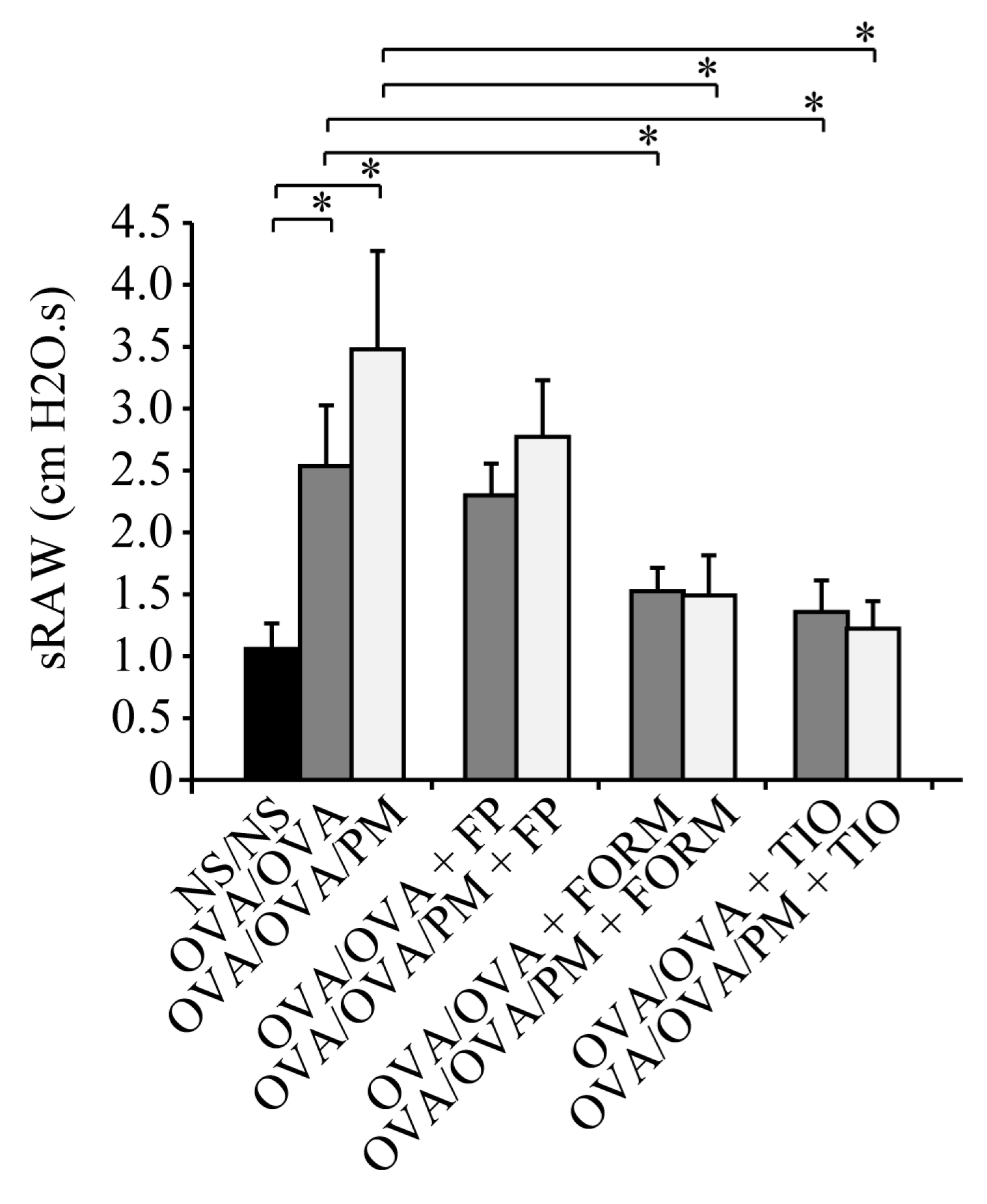