Persistence of Salmonella Typhimurium in Well Waters from a Rural Area of Changchun City, China
Next Article in Special Issue

Kidney cancer ranks among the top 10 cancers in the United States. Although it affects both male and female populations, it is more common in males. The prevalence rate of renal cell carcinoma (RCC), which represents about 85% of kidney cancers, has been increasing gradually in many developed countries. Family history has been considered as one of the most relevant risk factors for kidney cancer, although most forms of an inherited predisposition for RCC only account for less than four percent. Lifestyle and other factors such as occupational exposure, high blood pressure, poor diet, and heavy cigarette smoking are highly associated with its incidence and mortality rates. In the United States, White populations have the lowest prevalence of RCC compared to other ethnic groups, while Black Americans suffer disproportionally from the adverse effects of RCC. Hence, this review article aims at identifying the major risk factors associated with RCC and highlighting the new therapeutic approaches for its control/prevention. To achieve this specific aim, articles in peer-reviewed journals with a primary focus on risk factors related to kidney cancer and on strategies to reduce RCC were identified. The review was systematically conducted by searching the databases of MEDLINE, PUBMED Central, and Google Scholar libraries for original articles. From the search, we found that the incidence and mortality rates of RCC are strongly associated with four main risk factors, including family history (genetics), lifestyle (poor diet, cigarette smoking, excess alcohol drinking), environment (community where people live), and occupation (place where people work). In addition, unequal access to improvement in RCC cancer treatment, limited access to screening and diagnosis, and limited access to kidney transplant significantly contribute to the difference observed in survival rate between African Americans and Caucasians. There is also scientific evidence suggesting that some physicians contribute to racial disparities when performing kidney transplant among minority populations. New therapeutic measures should be taken to prevent or reduce RCC, especially among African Americans, the most vulnerable population group. View Full-Text
Keywords: Renal cell carcinoma; incidence; mortality; risk factors; Black; White; prevention Renal cell carcinoma; incidence; mortality; risk factors; Black; White; prevention
►▼ Show Figures 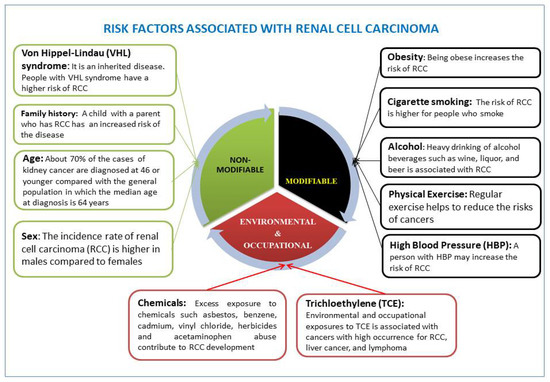