Background: Variations in several clopidogrel-pharmacogenes have been linked to clopidogrel response variability and clinical outcomes. We aimed to determine the frequency distribution of major polymorphisms on CYP2C19, PON1, ABCB1 and P2RY12 pharmacogenes in Puerto Ricans. Methods: This was a cross-sectional, population-based study of 200 unrelated “Guthrie” cards specimens from newborns registered in the Puerto Rican newborn screening program (PRNSP) between 2004 and 2014. Taqman® SNP assay techniques were used for genotyping. Results: Minor allele frequencies (MAF) were 46% for PON1 (rs662), 41% for ABCB1 (rs1045642), 14% for CYP2C19*17, 13% for CYP2C19*2, 12% for P2RY12-H2 and 0.3% for CYP2C19*4. No carriers of the CYP2C19*3 variants were detected. All alleles and genotype proportions were found to be in Hardy–Weinberg equilibrium (HWE). Overall, there were no significant differences between MAFs of these variants in Puerto Ricans and the general population (n = 453) of the 1000 Genome project, except when comparisons to each individual parental group were performed (i.e., Africans, Europeans and East-Asians; p < 0.05). As expected, the prevalence of these markers in Puerto Ricans most resembled those in the 181 subjects from reference populations of the Americas. Conclusions: These prevalence data provide a necessary groundwork for future clinical studies of clopidogrel pharmacogenetics in Caribbean Hispanics. View Full-Text
Keywords: clopidogrel; pharmacogenetics; Puerto Ricans; genotypes; allele frequency clopidogrel; pharmacogenetics; Puerto Ricans; genotypes; allele frequency
►▼ Show Figures 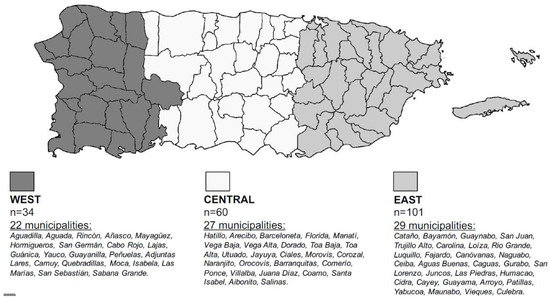