Does Walkability Contribute to Geographic Variation in Psychosocial Distress? A Spatial Analysis of 91,142 Members of the 45 and Up Study in Sydney, Australia

Suicide is a serious but preventable public health issue. Several previous studies have revealed a positive association between altitude and suicide rates at the county level in the contiguous United States. We assessed the association between suicide rates and altitude using a cross-county ecological study design. Data on suicide rates were obtained from a Web-based Injury Statistics Query and Reporting System (WISQARS), maintained by the U.S. National Center for Injury Prevention and Control (NCIPC). Altitude data were collected from the United States Geological Survey (USGS). We employed an ordinary least square (OLS) regression to model the association between altitude and suicide rates in 3064 counties in the contiguous U.S. We conducted a geographically weighted regression (GWR) to examine the spatially varying relationship between suicide rates and altitude after controlling for several well-established covariates. A significant positive association between altitude and suicide rates (average county rates between 2008 and 2014) was found in the dataset in the OLS model (R2 = 0.483, p < 0.001). Our GWR model fitted the data better, as indicated by an improved R2 (average: 0.62; range: 0.21–0.64) and a lower Akaike Information Criteria (AIC) value (13,593.68 vs. 14,432.14 in the OLS model). The GWR model also significantly reduced the spatial autocorrelation, as indicated by Moran’s I test statistic (Moran’s I = 0.171; z = 33.656; p < 0.001 vs. Moran’s I = 0.323; z = 63.526; p < 0.001 in the OLS model). In addition, a stronger positive relationship was detected in areas of the northern regions, northern plain regions, and southeastern regions in the U.S. Our study confirmed a varying overall positive relationship between altitude and suicide. Future research may consider controlling more predictor variables in regression models, such as firearm ownership, religion, and access to mental health services. View Full-Text
Keywords: altitude; suicide rates; geographically weighted regression; health geography altitude; suicide rates; geographically weighted regression; health geography
►▼ Show Figures 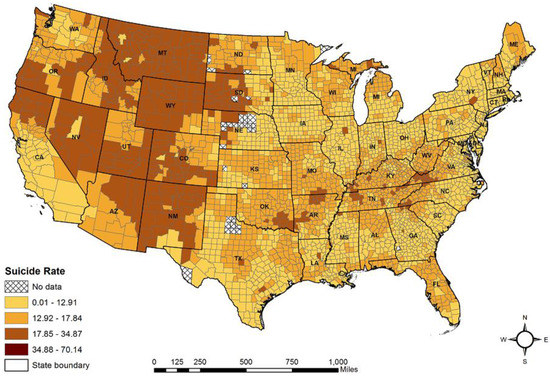 
Ha H, Tu W. An Ecological Study on the Spatially Varying Relationship between County-Level Suicide Rates and Altitude in the United States. International Journal of Environmental Research and Public Health. 2018; 15(4):671.