Annoyance Judgment and Measurements of Environmental Noise: A Focus on Italian Secondary Schools
Next Article in Special Issue

Application of a Time-Stratified Case-Crossover Design to Explore the Effects of Air Pollution and Season on Childhood Asthma Hospitalization in Cities of Differing Urban Patterns: Big Data Analytics of Government Open Data
Previous Article in Journal

Honghu Lake, the biggest natural wetland in the Hubei Province, lies in Jianghan Plain between the Yangtze River and Han River (Figure 1). The lake has polygonal shape with an area of about 344 km2 (29°39′–30°02′ N; 113°07′–114°02′ E). It is 23.4 km from east to west and 20.8 km from north to south with the coastline length of 1354 km. The average depth of the lake is about 1.34 m, with the maximum depth of 2.30 m. Honghu Lake has a north subtropical humid monsoon climate with the annual average temperature of 15.9–16.6 °C, and the annual average rain precipitation is 1000–1300 mm. With rapid development of the local economy, Honghu Lake was polluted by heavy metals to some extent, due to massive discharge of wastewater from industrial, domestic and agricultural sources from Honghu City and Jianli City [28,31,32].

Surface sediment samples were collected from 16 typical locations (Figure 1) with the help of a global position system (GPS) device in September 2016. The upper 0–10 cm depth of sediments was collected using a mini Beeker type sampler, kept in polytetrafluoroethylene (PTFE) bags and then transferred rapidly to the laboratory in Wuhan. The number of collected samples in each site was 3 and samples in each site were mixed into a composite sample before analyzed. In the laboratory, samples were put evenly on the plastic film to dry naturally in a cool ventilated place. Then, samples were crushed into small pieces by using a pestle and mortar. After that, the samples were sieved through a 10 mesh nylon sieves to remove stones and plant residue. Finally, all samples were processed with another 100 mesh sieve and kept in the plastic bottles prior to analyses.

For the determination of total heavy metal content, 0.25 g treated samples were accurately taken by an electronic analytical balance (BSA124S, Goettingen, Germany). Afterwards, the samples were put into digestion vessels and digested with HCl, HNO3, HF, and HClO4 by the graphite furnace digestion instrument. Then, the solutions were diluted into a final volume of 50 mL with 2% (v/v) HNO3. The heavy metal contents of Cr, Cu, Pb, Zn and Cd were all detected by Atomic Absorption Spectroscopy (AAS ZEEnit700, Jena, Germany). The distribution of heavy metals in different chemical fractions were determined by optimized BCR three-stage extraction procedure which is widely applied in the studies on heavy metal fraction and the steps of sequential extraction have been provided elsewhere [18,33,34]. According to the types and sequence of extracting agent, the heavy metal fraction in sediments can be divided in to acid-extractable fraction (F1), reducible fraction (F2), oxidizable fraction (F3) and residual fraction (F4) [27,35]. Sediment pH was determined using a glass electrode method (Mettler-Toledo FE20, Zurich, Switzerland) [36]. Sediment organic matter (SOM) was determined by K2Cr2O7 digestion method [37].
To ensure reliability and accuracy of the analysis results, the quality assurance and quality control were strictly assessed using blank samples, parallel samples and standard reference materials (GBW07423). The analysis results were reliable when repeat sample analysis error was below 5%, and the analytical precision for replicate samples was within ±10%. Accepted recoveries of standard samples ranged from 90% to 108%.

The potential ecological risk index (PEI) method, established by Hakanson (1980) [19], is based on the principles of sedimentology. It is widely used by scholars to assess the pollution and potential ecological risk of heavy metal in sediment. This method not only accounts for the content of heavy metals in sediments, but also connects the ecological and environmental effects of heavy metals to environment toxicology [1,3]. where is potential risk of individual heavy metal. is toxic-response factor for a given heavy metal, which reflects toxic level and environmental sensitivity of the heavy metal. is contamination factor. is actually measured concentration of the heavy metal in the sediment. is reference value of heavy metal concentration in sediment.
For , the Hakanson recommended values of Cr, Cu, Zn, Pb and Cd are 2, 5, 1, 5 and 30, respectively [19]. For , soil background values for Hubei Province were used as a reference, and the values of Cr, Cu, Zn, Pb and Cd were 86.0 mg/kg, 30.7 mg/kg, 83.6 mg/kg, 26.7 mg/kg, and 0.172 mg/kg, respectively [44]. Five levels of are defined by Hakanson, as shown in Table 1.

Geographic information system (GIS) was used to present the spatial distribution of heavy metals and risk level in Honghu Lake [21,50]. A proper interpolation method could reduce the corresponding parameter uncertainty and increase the credibility of evaluation. Considering precondition (sampling point distribution, sample numbers and so on) of commonly used methods, the inverse distance weighted method (IDW) was finally adopted to provide spatially detailed information for decision-makers [51,52]. IDW can carry out the spatial analysis for points, which is relatively independent of the surrounding data points, and does not induce the inacceptable interpolation model smoothing effect under relatively limited sample data set [28]. A series of spatial distribution maps was made based on IDW using the ArcGIS 9.3 software (ArcGIS 9.3, Environmental Systems Research Institute Inc., Redlands, CA, USA).

Sediment samples display the pHs between 6.81 and 7.30 with an average value of 7.08, indicating a relative safer environment for heavy metal stabilization. SOM in sediments varied from 3.00 g/kg to 12.91 g/kg with an average value of 7.30 g/kg. Concentrations, Igeo values and sediment quality guidelines (SQGs) are listed in Table 3. Average concentrations of Cu, Zn and Cd exceeded their corresponding background values, while average concentrations of Cr and Pb were lower than the background values. In particular, the average measured value of Cd was 2.5 times than its background value. SQG is established to evaluate the toxicity or risk of contaminants to aquatic ecosystems [52,53]. When the heavy metal’ concentration is lower than the threshold effect level (TEL), it means that adverse biological toxicity effects rarely occur. When concentration is higher than the probable effect level (PEL), it means that adverse biological toxicity effects frequently occur [52,53]. Compared with the corresponding TELs, the enrichment degree of the studied five metals in sediment decreased in the sequence of Cr > Cu > Zn > Pb > Cd. Generally, the concentrations of all heavy metals in 16 sampling sites were lower than Grade II values of the Chinese Environmental Quality Standard for Soils (GB 15618-1995). According to the calculated results of Igeo (Figure S1), it is obvious that Cd in all sampling sites were under un-contamination to moderate contamination, while sediments was not contaminated by Cr, Cu, Pb and Zn for their Igeo less than 0. Specifically, Cd in S14 has the highest Igeo value and Cd in S13 and S14 belonged to moderately contamination. Average Igeo values of five kinds of heavy metals decreased in the order of Cd > Zn > Cu > Pb > Cr.

3.2. Spatial Distribution of Heavy Metals in Surface Sediments from the Honghu Lake

Average Igeo values of the studied heavy metals decreased in the order of Cd > Zn > Cu > Pb > Cr. From metal chemical fractions’ proportions, Cr, Cu, Zn and Cd were dominated by their residual fraction while Pb was dominated by its oxidizable fraction. Cd had the highest proportion of acid-extractable fraction, which reached 24.35%. Compared with the corresponding TELs, adverse effects of studied five metals in sediments decreased in the sequence of Cr > Cu > Zn > Pb > Cd. Average potential ecological risk indexes were the descending order: Cd, Cu, Pb, Cr, Zn. Moreover, average RAC values were ranked in the order: Cd > Cu > Zn > Pb > Cr. Different results by different indexes probably confuse or even mislead decision-makers. Thus, the fuzzy comprehensive risk assessment model was established. Average comprehensive risks of heavy metals decreased in the order of Cd (considerable risk) > Cu (moderate risk) > Zn (low risk) > Pb > Cr. Cd and Cu were determined as the contaminants of most concern among the five metals, which differed to a certain extent from results of Igeo and SQGs method. For Cd, the central part of South Honghu Lake (S4, S5, S6, S9 and S12), east part of North Honghu Lake (S1) and outlet of outlet of Honghu Lake (S10) were the priority control areas. Notice that 57.14% Cd samples, which belonged to considerable risk, need to be paid more attention for their 40–50% membership degrees. For Cu, the areas around S1, S12 and S14 of South Honghu Lake were of concern, and area around S1 needs to be paid more attention by decision makers for their final risk judgment. Overall, the developed comprehensive risk assessment method proved to be an improvement on previous methods in as it synthetically incorporated the heavy metals’ total content, ecological risk, bioaccessibility and systematic parameter uncertainty control to provide not only a comprehensive risk level but also its membership degree, which reflects the probabilities of the risk level. Multivariate statistical analysis among heavy metals, pH and SOM need to be under further investigation to identify the contributions of the anthropogenic pollution such as urban lives, industries, and agriculture. It is advisable to develop environmental management strategies for the identified the contaminants and areas of most concern for further protecting and improving the aquatic environment in Honghu Lake.

This study was financially supported by the Humanities and Social Sciences Foundation of Ministry of Education of China (17YJCZH081), the Science and Technology Research Project of Hubei Provincial Education Department (B2017601), and the Innovative Education Program for Graduate Students of Zhongnan University of Economics and Law (2017Y1406). 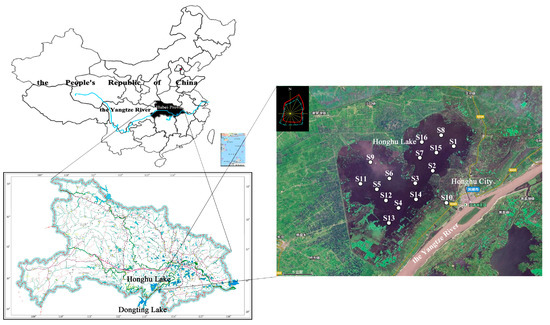 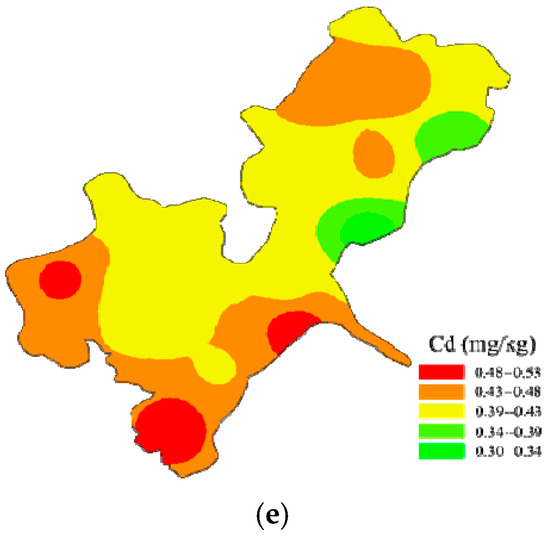 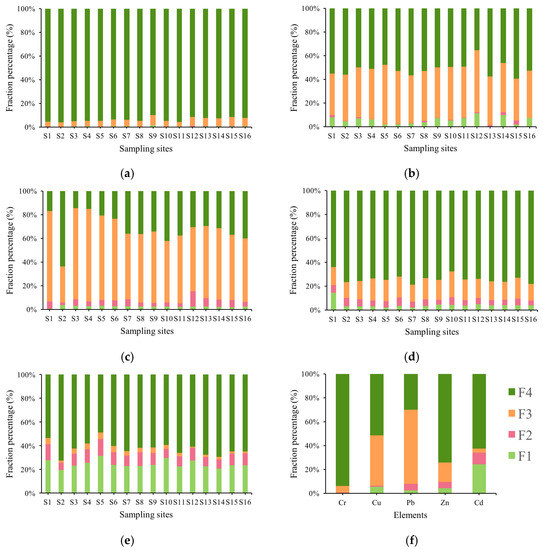 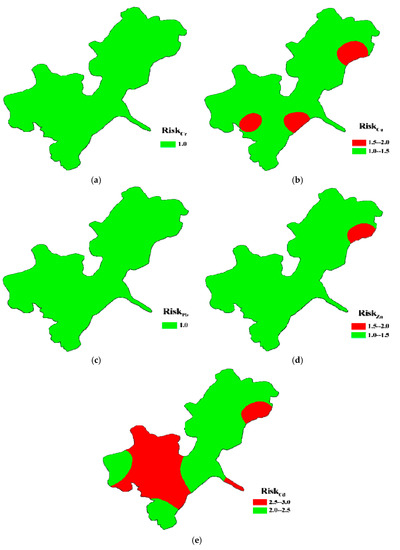