The Epidemiology, Cost, and Occupational Context of Spinal Injuries Sustained While ‘Working for Income’ in NSW: A Record-Linkage Study
Next Article in Special Issue

Socioeconomic Status in Adolescents: A Study of Its Relationship with Overweight and Obesity and Influence on Social Network Configuration

Social Network Analysis and Resilience in University Students: An Approach from Cohesiveness

:
The Social Network Analysis offers a view of social phenomena based on interactions. The aim of this study is to compare social reality through the cohesion variable and analyse its relationship with the resilience of university students. This information is useful to work with the students academically and to optimise the properties of the network that have an influence in academic performance. This is a descriptive transversal study with 90 students from the first and third year of the Nursing Degree. Cohesion variables from the support and friendship networks and the level of resilience were gathered. The UCINET programme was used for network analysis and the SPSS programme for statistical analysis. The students’ friendship and support networks show high intra-classroom cohesion although there are no differences between the support networks and friendship or minimal contact networks in both of the courses used for the study. The network cohesion indicators show less cohesion in the third year. No correlations were found between cohesion and resilience. Resilience does not appear to be an attribute related to cohesion or vice versa.
Keywords:
nursing students; resilience; social network analysis; cohesion

–
To compare the intra-classroom cohesion in friendship and support networks belonging to students in the first and third years of a Nursing Degree.
–
To analyse the relationship between the cohesion and resilience variables of university students.

This investigation is a descriptive, transversal study.

2.1. Description of the Sample

The number of students from a Nursing Degree from a Spanish Public University that participated was 90. The characteristics of the study can be seen in Table 1. The study involved the participation of 48 students from the first year and 42 students from the third year. The first and third years were chosen because it is intended to determine the differences between a new network, formed by nodes that have been known for a short time, and a more mature one, with several years of relationship. Men comprised 21.1% of the students and 78.8% were women.

Data collection was carried out through a questionnaire that was designed ad-hoc and filled in by individuals, in which social-demographic data was collected, such as the gender and the academic year of the student.
The cohesion variable was described using the following metrics: density, reciprocity, average distance, diameter, homophily, ego density and accessibility of each one of the course years (Table 2). The networks in which the cohesion was analysed were friendship networks [31] and support networks [32]. To calculate the cohesion, a limited census of actors was used and the replies were carried out on a list of students from each course year. The replies were evaluated on a Likert scale from 0 to 4 [28], with the support network being 0 for “never” and 4 for “always”. On the friendship network, 0 corresponded to “no friends” and 4 to “best friend”.
The resilience variable was measured with the abbreviated version of Campbell-Sills and Stein (2007), validated in Spanish young people [35], from the original Connor-Davidson scale [36]. The questionnaire had 10 items. The results obtained were quantified with the Likert scale that went from 0 to 4 points, with regards to the level of agreement or disagreement, respectively.

The data used for this study was obtained during the first semester of the 2016–2017 academic year.
To examine the cohesion variable of the social-centric networks of the classroom, we needed to elaborate on the charts from the first and third year separately. In these charts, both friendship and support relationships are shown. Square charts were designed with N rows × N columns, where the data was placed. To calculate the cohesion, we had to introduce dichotomised data. In the support network, we opted for the following dichotomisation criteria: the results 0 meaning “never” and 1 meaning “rarely”, that which corresponds to “does not ask for help” would be represented with 0, whilst the values 2, meaning “sometimes”, 3, meaning “frequently”, and 4, meaning “always”, were represented with 1, which corresponds with “does ask for help” [28,37].
With regards to the intensity, in the case of the Friendship Network, the data coding linked two different networks [28,38]:
In the “Minimal Contact Network” the points from 1, “hardly any”, 2, “some”, 3, “a lot” and 4, “good friends” were dichotomized with 1.

–
Meanwhile, in the network of “Friendship Network” the concept was restricted, just values 3 and 4 were considered as 1.

The charts obtained with the data collection were carried out with an Excel programme. To calculate the cohesion dimensions (density, reciprocity, average distance, diameter, ego density, homophily, and accessibility), the UCINET V. 6.645, Analytic Technologies, Lexington, KY, USA, a software tool for the analysis and visualization of exploratory data networks [39], was used. Once the cohesion data was obtained, the SPSS program (V.24, IBM, New York, NY, USA) was used to carry out the statistical analysis. The descriptive statistics were calculated, as were the Pearson correlations between the cohesion variables (ego density) and resilience. In addition, the data obtained in the networks were checked through the Mann-Whitney U Test.

The participants were verbally informed of the aims of the study and, to be able to participate in the study, they were required to voluntarily sign an informed consent document. The confidentiality and anonymity of the subjects that were a part of the study were taken into account at all times. The Deontological Code and the Helsinki Declaration were followed, as well as the legal regulations of data confidentiality (Law 15/1999 of the 13th of December on data protection of personal character). This study was approved by the Ethical Committee of the University (ETICA-ULE-010-2017), which guaranteed the compliance of all ethical and legal matters.

Below, the cohesion indicators normalised of support and friendship networks from the first and third years are detailed in Table 3.
The results obtained for the cohesion indicators of support networks and friendship and minimal contact networks in the first and third years, show less cohesion in the higher year.
The average obtained by the resilience variable in the first course was of 29.42 and the standard deviation was 5.18. With regards to the third year, the results were 28.98 and 5.18 respectively.
In Figure 1, Figure 2, Figure 3, Figure 4, Figure 5 and Figure 6, we can see the graphic representations of the support and friendship networks of the first and third years, with the non-mutual relationships being shown in black and the mutual relationships in green. Men are represented in blue and women are represented in pink.
With regards to the accessibility of the support network in both years, as can be seen in Figure 1 and Figure 2, all the nodes are required by other nodes and all of them turn to at least one person in the case that this person needed help.
In the friendship network of the first year (Figure 3), there are three nodes that did not consider anybody to be good friends and one of them is also not considered by anybody as a good friend, thus becoming isolated. In the third year network (Figure 4), two nodes do not consider themselves as friends of anybody, although there are other nodes that consider these to be good friends.
With regards to the accessibility, in the minimal contact network of the first year (Figure 5), one node considered nobody as a friend, although he was considered as a friend by other students. In the third year network (Figure 6), all of the nodes were accessible and helped other students.
Upon comparing the networks of both years through the Mann-Whitney U Test, the results were that there are no significant statistical differences between the cohesion variables of the support, friendship and minimal contact networks (p = 0.317).
Below, the correlation analysis between individual scores of the density of each node (ego density) is shown in detail, as well as the resilience in each one of the friendship and support networks from both groups. This correlational result does not confirm a lack of relationship, but confirms that there was no statistical relationship between cohesion and resilience in this study (Table 4).

We have managed to obtain a result for the aims suggested in this study: to compare the intra-classroom cohesion in the friendship and support networks of students in the first and third years of the nursing degree; as well as analysing the relationship between cohesion variables and resilience in university students.
We did not find statistically significant relationships between resilience and cohesion in the university students. For this group, the resilience is not an attribute that is affected by cohesion.
The friendship and support networks of the students show high intra-classroom cohesion, although there are no differences between support networks and friendship and minimal contact networks in both of the years presented in this study. These high cohesion values suggest that a high level of homophily with some attributes will exist. This fact is interesting enough to be studied more in depth, with the aim of boosting group values and working with them. On the other hand, the high cohesion provides students with interesting social capital that can make the creation of ideas and resources easier, as well as contributing to their academic performance inside and outside the classroom.

To the nursing students for their attention and cooperation. 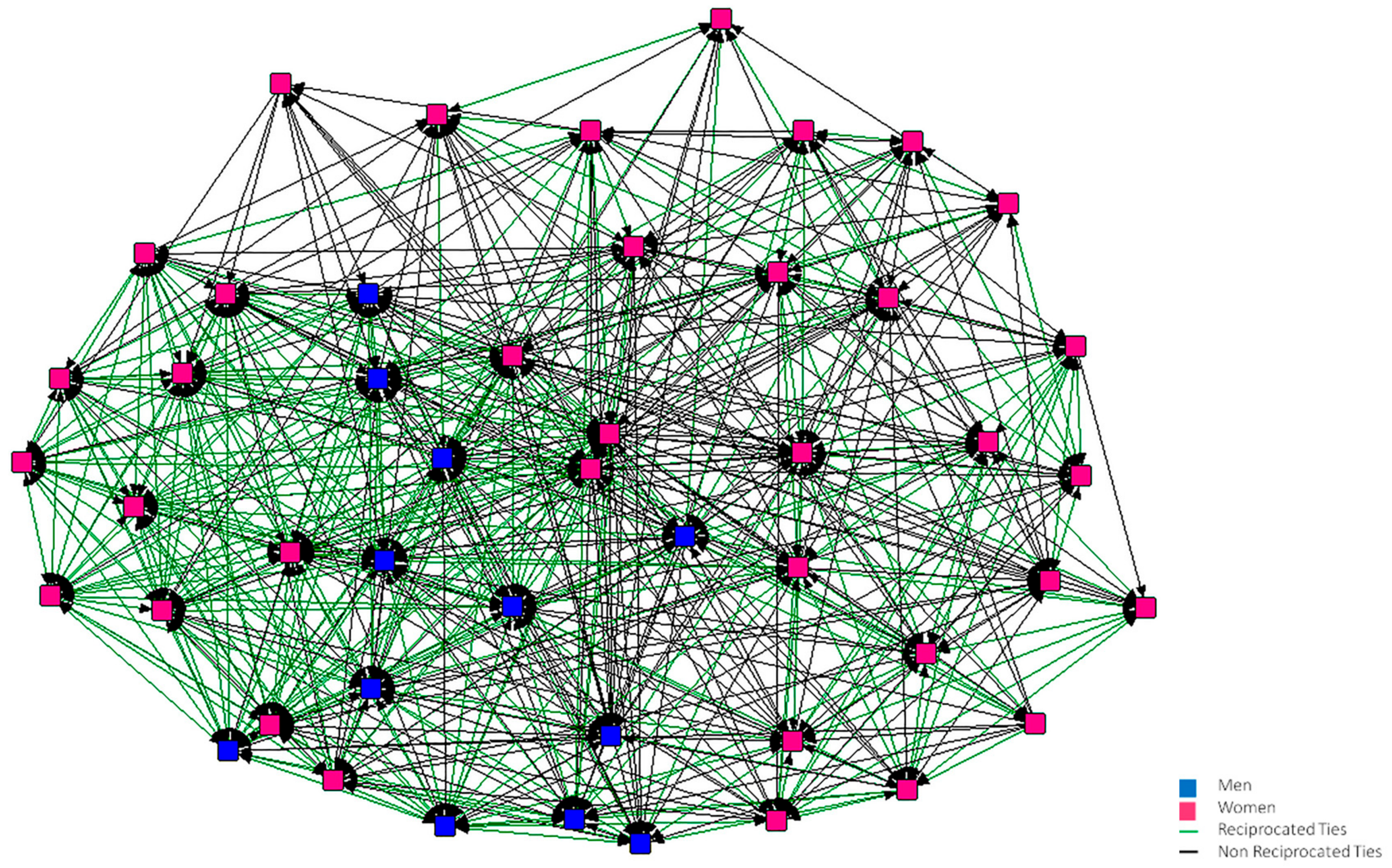 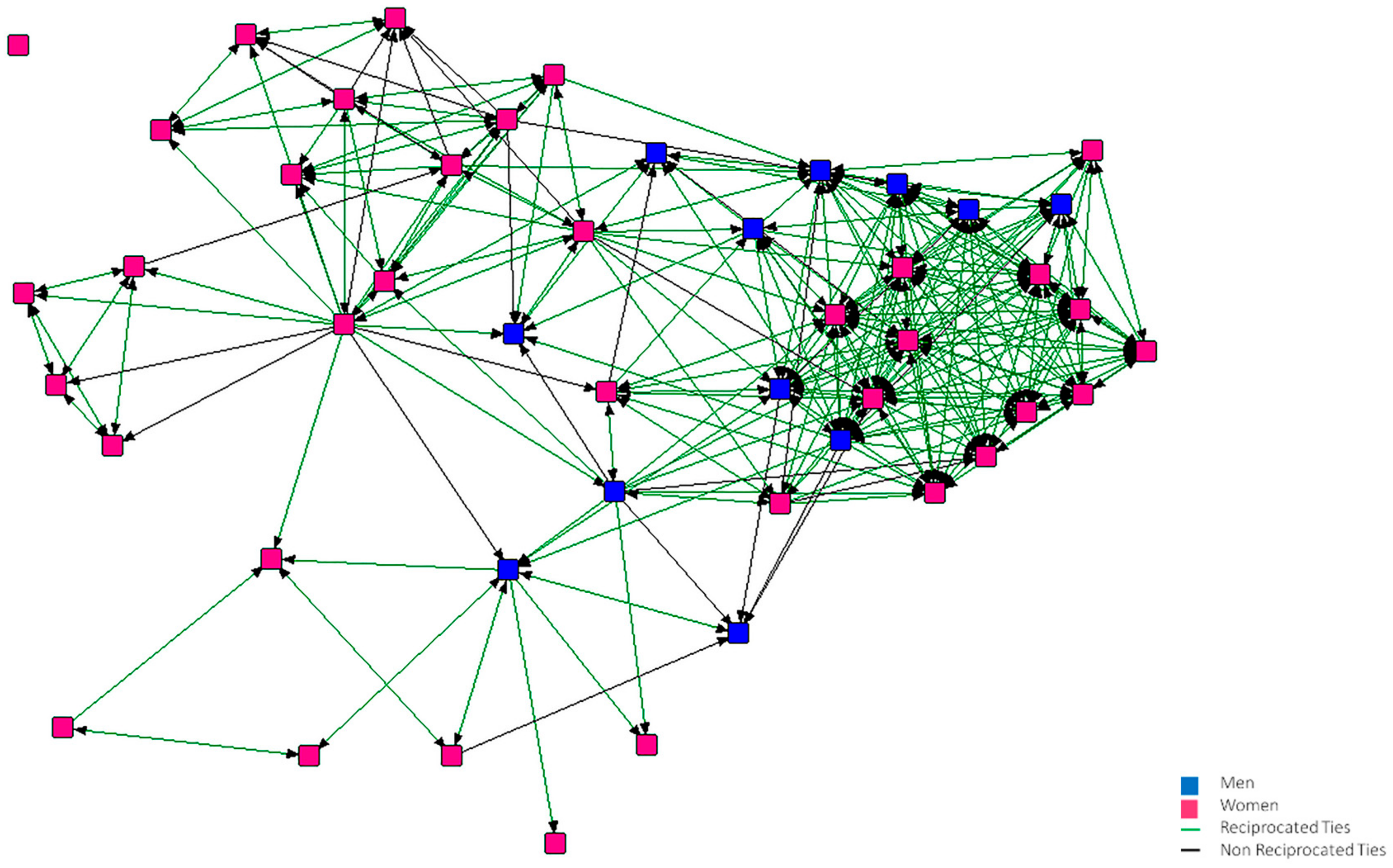 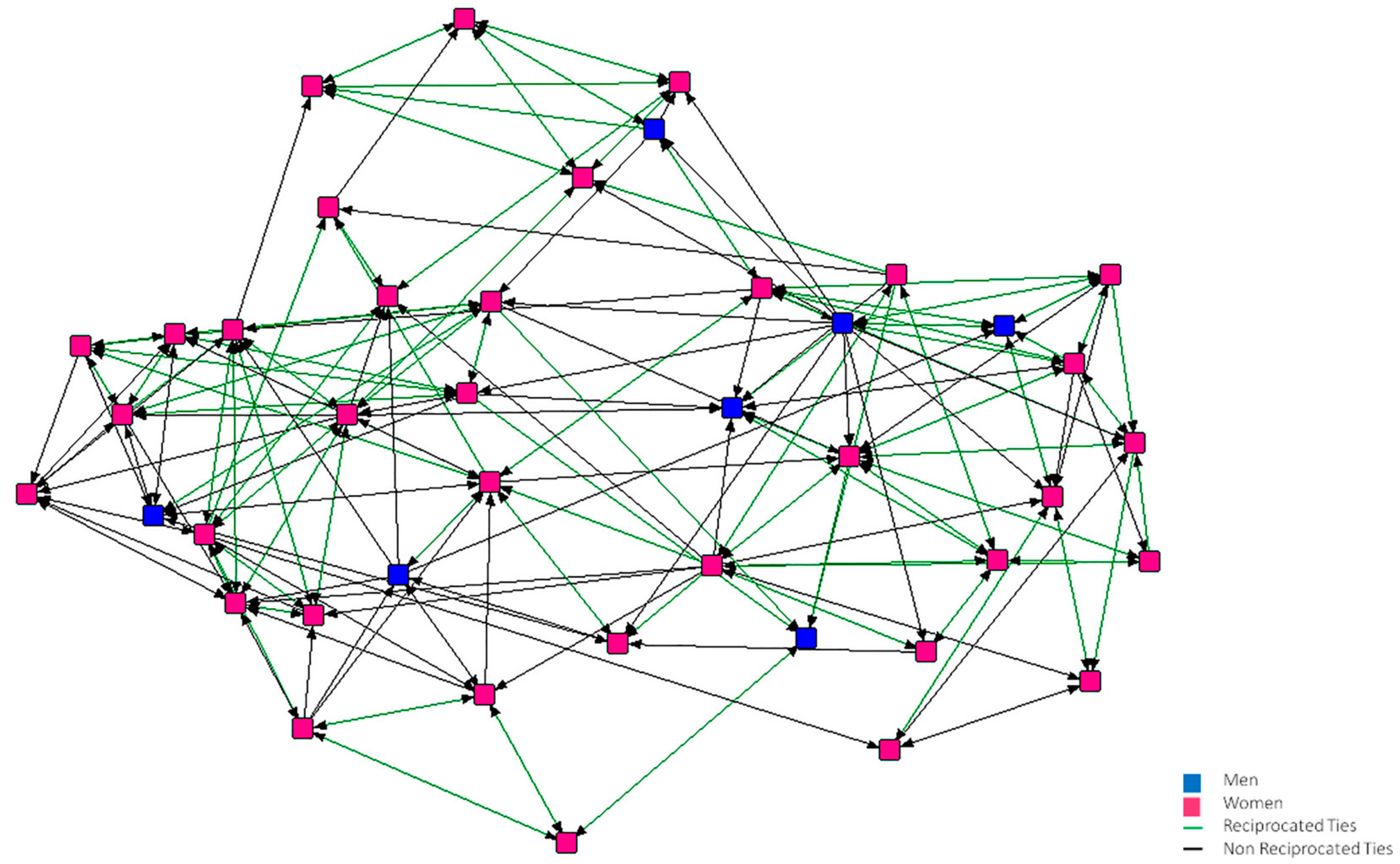 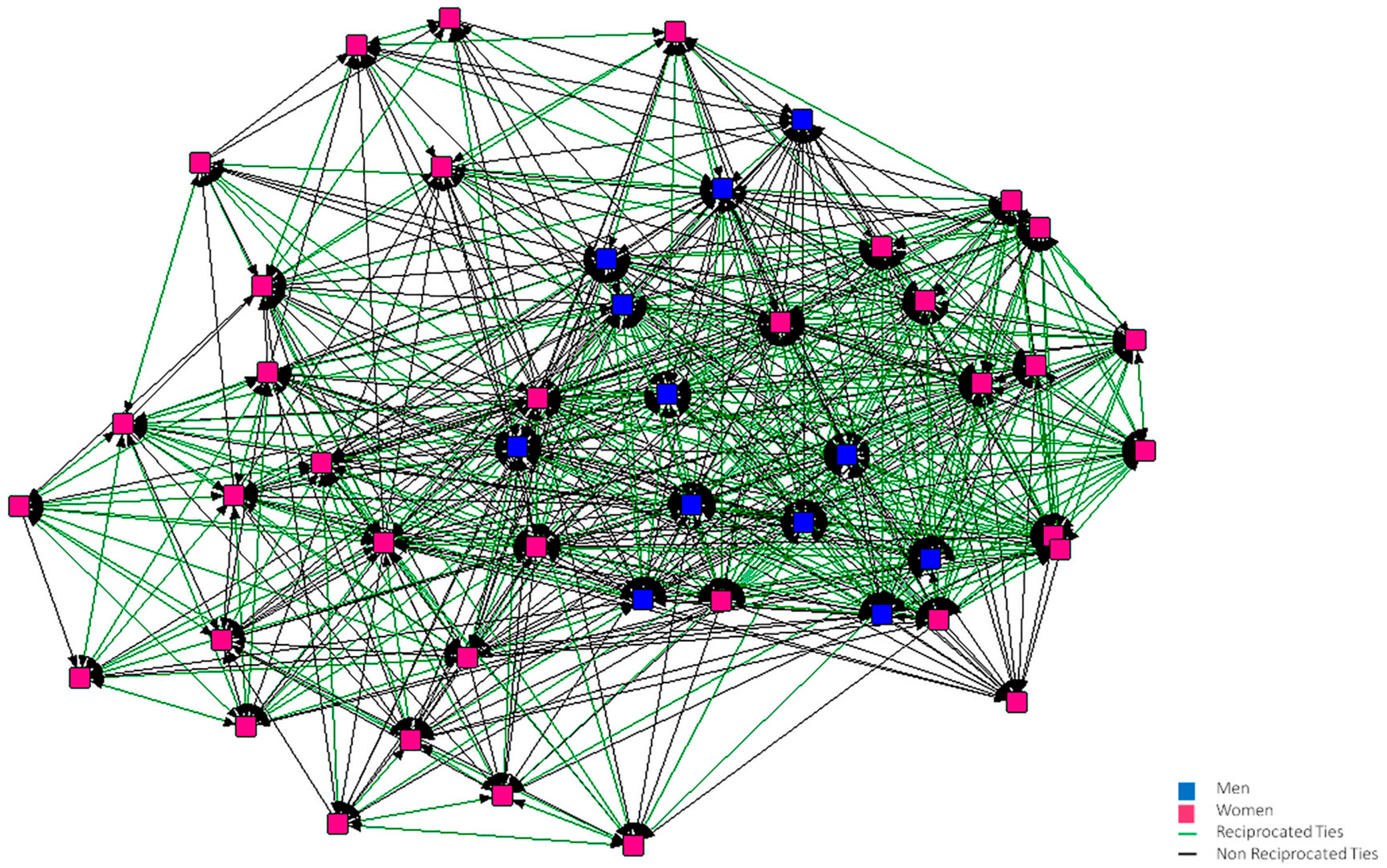