Evaluating Economic Growth, Industrial Structure, and Water Quality of the Xiangjiang River Basin in China Based on a Spatial Econometric Approach
Next Article in Special Issue

Do Occupational and Patient Safety Culture in Hospitals Share Predictors in the Field of Psychosocial Working Conditions? Findings from a Cross-Sectional Study in German University Hospitals
Previous Article in Journal

Daily Effect of Recovery on Exhaustion: A Cross-Level Interaction Effect of Workaholism

Differences in the Incidence of Symptomatic Cervical and Lumbar Disc Herniation According to Age, Sex and National Health Insurance Eligibility: A Pilot Study on the Disease’s Association with Work

Disc herniation (DH) is the displacement of disc material (nucleus pulposus or annulus fibrosis) beyond the intervertebral disc space [1]. Lumbar disc herniation (LDH) is the major cause of morbidity and its treatment is very expensive [2]. In South Korea, DH greatly affects a worker’s compensation. It has also been considered a controversial disease for medical compensation approval because it is difficult to medically identify whether DH is caused by occupational factors or factors naturally developed by individuals [3]. Although there is no basic epidemiological information for determining whether DH is associated with occupational factors, some epidemiological studies have revealed the incidence of DH. According to Jordon, the prevalence of LDH in Finland and Italy is 1–3%, which is higher for individuals aged 30–59 years, with men having a two times higher incidence than women [1]. Deyo et al. assumed that the incidence of LDH in America would reach about 1–2% [2]. Radhakrishnan et al. reported that the annual incidence of cervical disc herniation (CDH) in Rochester and Minnesota between 1976 and 1990 reached its peak for individuals in their 60s, with 18.6 of 100,000 individuals developing the disease [4]. Meanwhile, a significant number of asymptomatic disc herniation (DH) cases may be present as well [5,6]. However, these results have been limited to a certain age group, region, occupation, or group and cannot be referred to when evaluating the occurrence distribution in all age groups or the differences in DH incidence between men and women according to age [7,8,9,10,11,12,13,14], thereby limiting their generalizability. The limitations of these epidemiological studies are attributed to the lack of analysis of nationwide diagnosis documents which until now had been impossible. However, since big data analysis has become a major aspect of medical studies, several attempts have been made to analyze all health insurance data and identify the distribution of disease occurrence [15]. In South Korea, health insurance data have become public, enabling the study of the distribution of disease occurrence through analysis of the data from the whole country.
Generally, identifying the distribution of disease occurrence is crucial for preventing a disease and determining the association between occupational factors and disease occurrence in order to determine worker’s compensation. Therefore, in this study, we analyzed health insurance data to identify the distribution of symptomatic CDH and LDH occurrence according to age, sex, and workforce eligibility for national health insurance. Asymptomatic DH was excluded from the analysis as its presence could not be determined from health insurance data. The qualification for health insurance varies with the characteristics of the tasks performed in the workplace. The reason for investigating the distribution of incidence by eligibility was to determine whether there were differences in the incidence of DH according to type of labor, as the nature and type of labor performed by the subscribers may vary according to their eligibility.

Among the study subjects who were selected by disease codes, subjects for whom the accuracy of diagnosis could not be confirmed, such as those who had been to a pharmacy or an oriental medical clinic, were excluded. However, the health insurance data represent claims data for insurance payments, and if a person received treatment for DH on multiple occasions, then the number of times that person was diagnosed with DH would be calculated in duplicate. Accordingly, to prevent duplicate calculation for a single subject, all records, except the initial hospital diagnosis of CDH or LDH were deleted. In addition, to identify the relevance of occupational factors, subjects were limited to those aged 20–69 years because they represent the actual labor population; subjects in other age groups were excluded. Those who were eligible for health insurance consisted of regional subscribers, company subscribers, government office and private school subscribers, and medical care subscribers. Regional subscribers included those who own their own businesses, such as a restaurant or beauty salon, and perform various forms of physical labor. Company subscribers included those who were employed in companies; approximately 70% of company subscribers performed field work that required physical work, whereas the major duties of the remaining 30% involved office work. Most of the government office and private school subscribers performed office work. Most of the medical care subscribers performed physical work with low payment, such as daily construction site work. In addition, health insurance data did not include worker’s and military compensation.
As the study population size varied by subscriber type, sex, and age, the number of individuals diagnosed with CDH and LDH was calculated by using the total number of individuals diagnosed with CDH and LDH between 2004 and 2010 as the numerator and the total number of individuals over same 7-year period by age, sex, and health insurance eligibility as the denominator. The results were represented as the number of individuals diagnosed with these diseases out of 100,000 individuals in a period of 7 years.

For the statistical analysis, SAS version 9.2 (SAS Institute, Cary, NC, USA) was used along with data cleaning. Frequency analysis and the chi-square test were also performed.

The present study protocol was reviewed and approved by the Institutional Review Board of Pusan National University, Yangsan Hospital College (approval No. 04-2015-008).

To determine the size by gender, age, and eligibility, the mean number of subscribers over the seven-year period from 2004–2010 is presented in Table 1. There were statistical differences between distribution by sex and subscriber type (p < 0.01).

3.2. Number of Examinees with CDH According to Gender, Age and Health Insurance Eligibility

3.3. Number of Patients with LDH According to Gender, Age, and Health Insurance Eligibility

The number of individuals diagnosed with symptomatic CDH and LDH increased with age, and the incidence of these diseases was higher in women than in men. Additionally, the incidence differed depending on the subject’s qualification for health insurance. These findings may help identify the association between DH and tasks performed at the workplace. Further research on distinctions of DH occurrence according to a specific business category or occupation and varied task burdens is needed.

This study was supported by Research institute for Convergence of biomedical science and technology (30-2015-34), Pusan National University Yangsan Hospital. 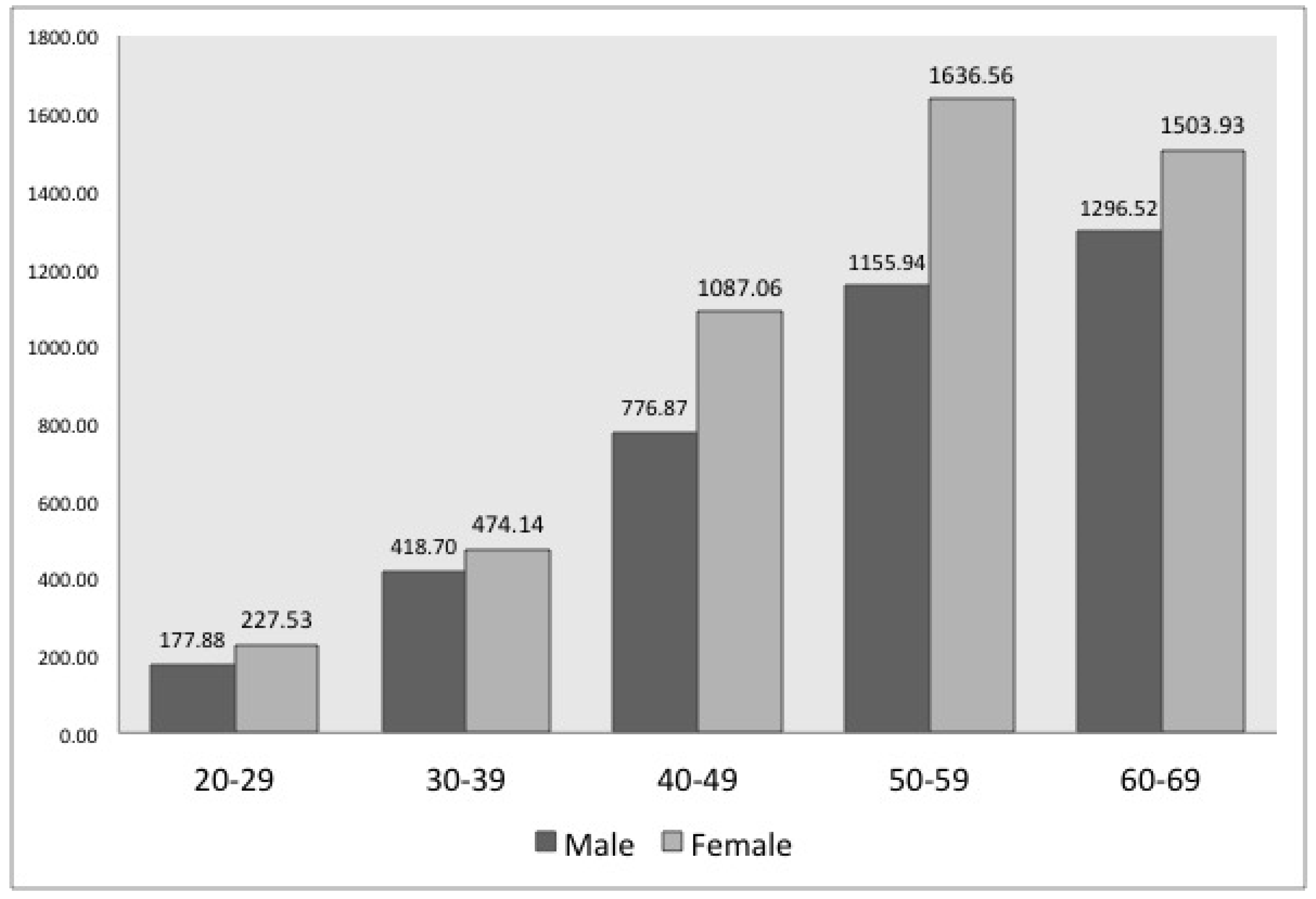