Influence of Afforestation on the Species Diversity of the Soil Seed Bank and Understory Vegetation in the Hill-Gullied Loess Plateau, China

Adsorption Property and Mechanism of Oxytetracycline onto Willow Residues

Antibiotics are widely and frequently used in numerous kinds of Pharmaceuticals and Personal Care Products (PPCPs). Recently, there has been a lot of concern about the presence of antibiotics in water and sediments due to their toxicity, their disturbance to the ecosystem function, and their poor biodegradability [1]. Oxytetracycline (OTC) is one of the most common antibiotics and it has proved to be difficult to biodegrade. Nowadays, residual OTC has already been detected in many countries and areas. In British soil, which was applied with manure, the concentration of OTC was as high as 1691 μg/kg [2]. In northern Turkey, OTC was detected in all manured agricultural soil with a maximum concentration of 500 μg/kg [3]. In China, the contents of OTC in sediment and in aquaculture field soil were as high as 200 mg/kg and 285 mg/kg, respectively [4,5]. Thus, the residues of OTC in the environment have been confirmed to be a global issue. There are many methods available for antibiotic removal, including adsorption [6], oxidation [7], photochemical degradation [8], electrochemical treatments [9], and membrane filtration [10]. Among these methods, adsorption is considered to be one of the most effective methods for removing OTC with a low concentration. Some scholars have studied the adsorption of OTC with different materials in recent years. Huang et al. [11] studied the characterization of activated carbons that were prepared by microwave and conventional heating methods, and their application in the removal of OTC. Wang et al. [12] focused on the adsorption of OTC onto three kinds of commercial resins. Liu et al. [13] found that the modified corn straw was an effective adsorbent in removing OTC from wastewater. It can be seen that the adsorption of OTC onto different materials has been studied. However, the adsorption of OTC onto plant residues has rarely been the focus.
Plant residues as a natural organic matter, are considered as one of the most abundant, cheap, and renewable resources. Furthermore, plant residues are also a common biological adsorbent. Boving et al. [14] showed that aspen wood was an effective adsorbent for the removal of polycyclic aromatic hydrocarbons (PAHs). Chen et al. [15] reported that PAHs were effectively removed from wastewater by using wood chips, ryegrass roots, orange peels, bamboo leaves, and pine needles. Xi et al. [16] found that raw and modified plant residues both have great potential as effective, low-cost biosorbents for the removal of naphthalene, acenaphthene, phenanthrene, and pyrene in an aqueous solution. Lin et al. [17] found that raw and brewed tea leaves have high adsorption capacities for the removal of phenanthrene. So far, studies on the adsorption of plant residues have mainly concentrated on hydrophobic organic pollutants, and the roles of plant residues in the removal of hydrophilic organic pollutants require further study.
The main objectives of this study are given as follows: (1) to investigate the adsorption kinetics, isotherms, and thermodynamic properties involved in OTC-willow residues surface reaction; (2) to evaluate the structural characterization of different tissues of willow residues by the use of scanning electron microscopy (SEM), Fourier-transform infrared (FTIR) spectra, and an elemental analyzer. For this purpose, OTC was chosen as a representative of typical hydrophilic organic pollutants, and willow residues were chosen as the model plant residues. Willow residues, including willow roots (WR), willow stems (WS), and willow leaves (WL) were selected and modified via acid hydrolysis to obtain desugared samples. The purposes of modification are also listed as follows: (1) to remove polysaccharides from willow residues; (2) to simulate the accelerated decay process of willow residues.

Oxytetracycline was purchased from Boston Biomedical Inc. (Cambridge, MA, USA) with a United States Patent (USP) grade. The molecular formula of OTC is C22H24N2O9, and its molecular weight is 460.44. Methanol in its flowing phase was purchased from the Waters Company (Milford, MA, USA) with a High Performance Liquid Chromatography (HPLC) grade. The other reagents were all in an analytical grade.

Willow residues were collected from Chanba Ecological District, Xi’an, China (109°02′41″ E, 34°19′36″ N) in July 2015. These samples were washed with deionized distilled water to remove dust and were then oven-dried for 12 h at 60 °C, ground with a pulverizer, and were sieved to less than 0.25 mm, yielding raw samples. The raw samples were desugared by acid modification, using a reported method [18]. Acid modification, conducted in a 6 mol/L HCl solution with refluxing for 6 h at 100 °C was used to eliminate the polysaccharide component from raw willow roots (WR-R), raw willow stems (WS-R), and raw willow leaves (WL-R), and produced desugared willow roots (WR-D), desugared willow stems (WS-D), and desugared willow leaves (WL-D), respectively. The sugar content of the raw willow residues was calculated from the yields of the modified fractions. All desugared willow residues were separated from the acidic solution by filtration and then were washed with deionized distilled water to adjust these residues to neutral conditions and to remove any dissolved organic matter that had adsorbed onto the residues. All raw and desugared willow residues were oven-dried at 60 °C, ground, and sieved to less than 0.25 mm before analysis and adsorption experiments.

2.4. Detection Method of OTC in Solution

A Waters ACQUITY Ultra Performance Liquid Chromatography (UPLC) H-Class (Waters, Milford, MA, USA) with an ultraviolet/visible spectrophotometer detector and a C18 1.7 μm 2.1 × 150 mm column were used for the quantification of OTC in the solution, under the optimized conditions as follows: methanol/water = 60:40 as flowing phase, at a flow rate of 0.2 mL/min, with a column temperature of 60 °C ± 0.1 °C, a sample temperature of 10 °C ± 0.1 °C, an injection volume of 5 μL, a detected wavelength of 260 nm, and a retention time of 1.960 min.

To conduct the adsorption kinetic experiments, the batch studies were carried out by weighing 0.10 g of willow residues and adding it into a 50 mL graduated centrifuge tube. After 30 mL of the OTC solution was added into the graduated centrifuge tube, the mixture was placed on a rotating shaker and was agitated end-over-end in the dark at 150 r/min and at 25 °C for 90 h. The initial concentration of OTC was 10.00 mg/L and the aqueous samples were separated at predetermined time intervals using filter membranes of 0.22 μm. The concentrations of OTC were analyzed by UPLC. All of the adsorption experiments were performed in duplicate, and the experimental details are given in the related figures and tables. Blanks containing no OTC were analyzed and the loss (generally quite low) was considered. The uptake of OTC at time t, Qt (mg/kg), was calculated using the following equation: where C0 and Ct are the initial concentration of OTC (mg/L) in the solution and the concentration at time (t), respectively, V is the volume of the solution (L), and m is the weight of the willow residues (g).

For the adsorption isotherm studies, solutions with different initial concentrations were added, which ranged from 5.0 to 30.0 mg/L (5.0, 10.0, 15.0, 20.0, and 30.0 mg/L, pH = 7.0). The equilibrium time of the raw willow residues was set as 12 h, while the equilibrium time of the desugared willow residues was set as 24 h. All of the equilibrium times were enough according to the adsorption kinetic studies. The aqueous samples were separated by using filter membranes of 0.22 μm. The concentrations of OTC were analyzed by UPLC. Each initial concentration had two replicate samples. Blanks containing no OTC were analyzed and the loss (generally quite low) was considered. The uptake of OTC at equilibrium, Qe (mg/kg), was calculated by using the following equation: where Ce is the equilibrium concentration of OTC (mg/L) in the solution.

3.4. Analysis of the Adsorption Mechanism of OTC Adsorption onto Willow Residues

To better understand the adsorption mechanism of OTC adsorption onto willow residues, the structures of the different tissues of raw and desugared willow residues were studied using various methods such as SEM, FTIR spectra analysis, and Elemental analysis.

We are highly grateful to the anonymous reviewers for their valuable comments. This project was supported by the National Natural Science Foundation of China (No. 41372259 and No. 41672224) and the National Key Research and Development Program of China (No. 2016YFC0400701). 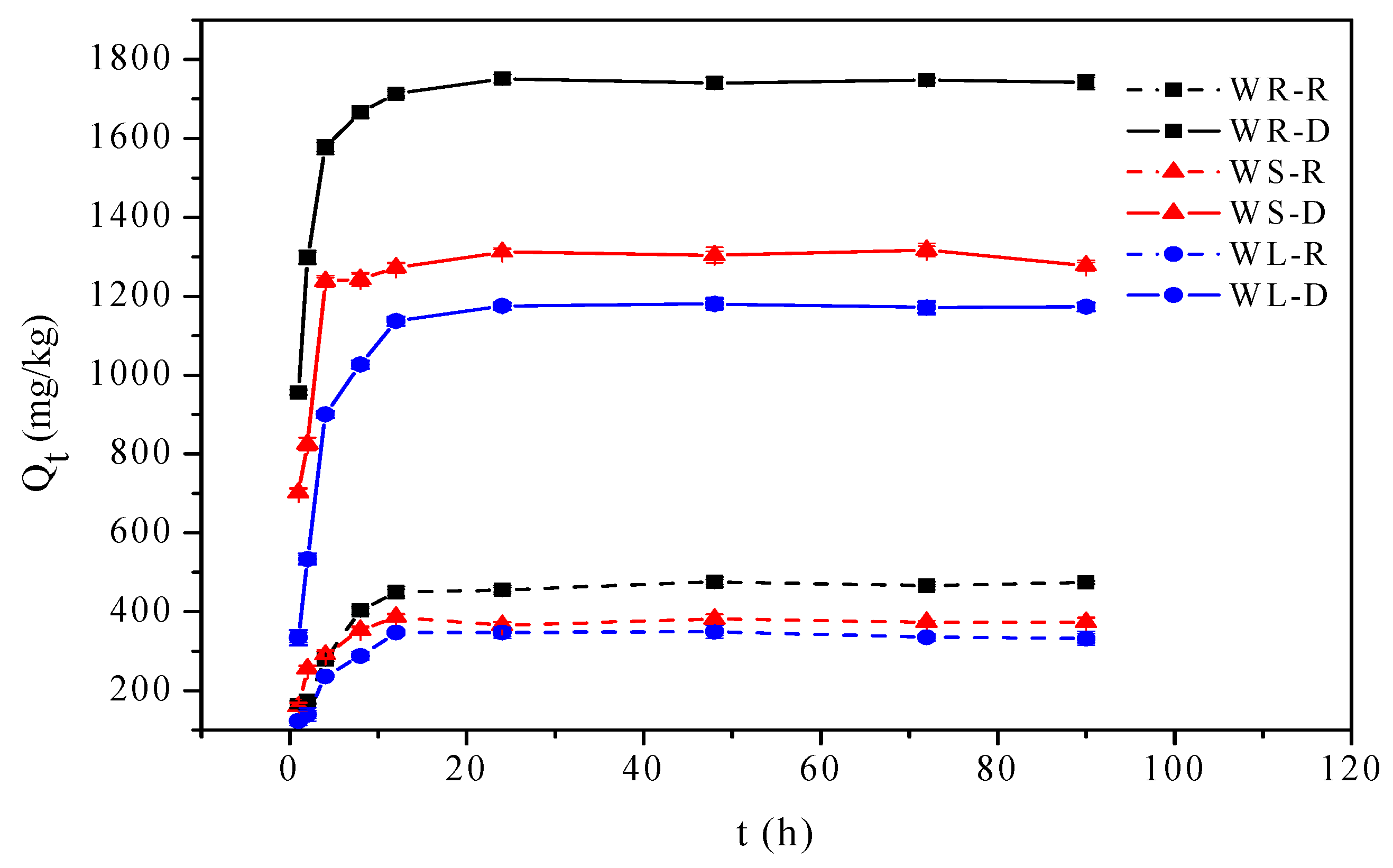 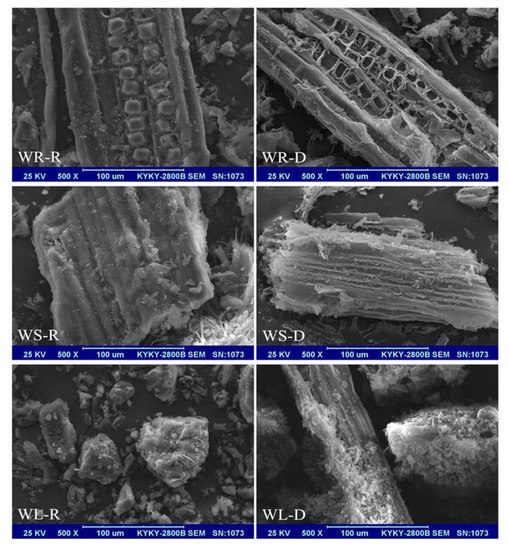 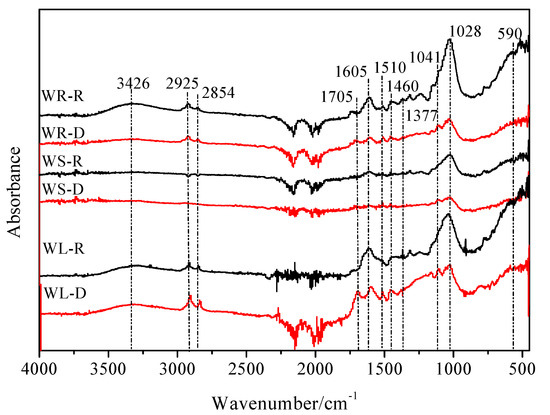 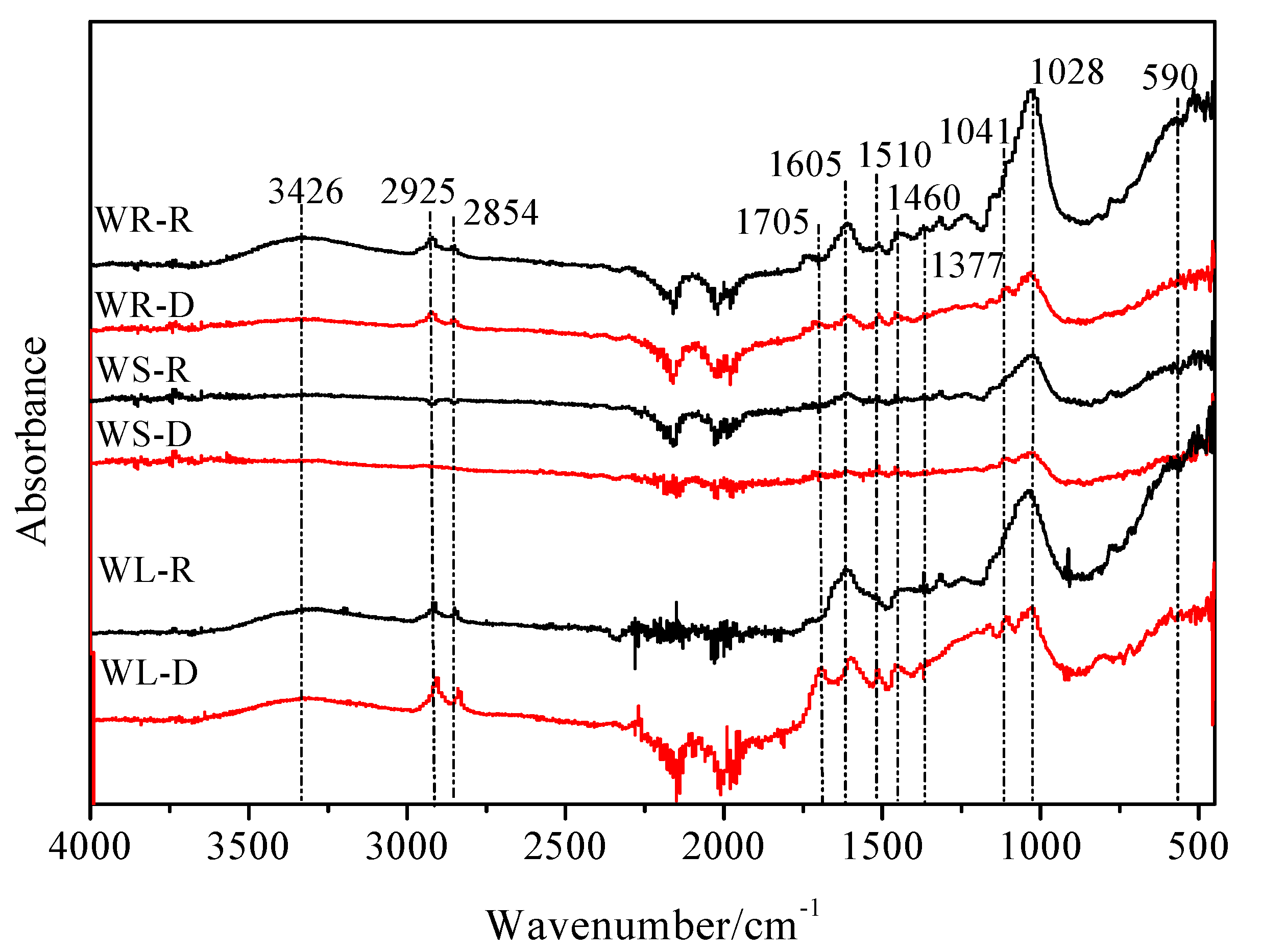