Temporary Black Henna Tattoos and Sensitization to para-Phenylenediamine (PPD): Two Paediatric Case Reports and a Review of the Literature

Background: The use of temporary henna tattoos has increased dramatically in recent years, especially in children and adolescents. To obtain a darker colour and prolong the life of the tattoo, red henna, a plant-derived substance, is typically added to para-phenylenediamine (PPD). The mixture is called temporary black henna tattoo (TBHT). Because of its molecular characteristics, PPD can induce skin sensitization that may cause various clinical manifestations with successive exposures, among which the most common is allergic contact dermatitis (ACD). This report describes two paediatric cases of PPD sensitization and ACD after the exposure to TBHT and summarizes the literature on this emerging clinical problem. Case Presentation: We describe two cases of childhood-onset ACD that occurred 2 and 10 days, respectively, after the application of a TBHT during the summer holidays. Patch tests showed an evident positive response to 1% PPD in both cases. Sensitization to PPD occurred in the first case because a previous henna tattoo did not result in overt symptoms; in the second case, the reaction occurred after the same tattoo was retouched. In both cases, hypopigmentation persisted and both the patients and their families were advised to avoid further contact with PPD-containing materials and substances that could lead to cross-reactions. Conclusions: Sensitization to PPD is a growing phenomenon in children. The most common cause appears to be exposure to TBHT in which PPD might be present at unknown or high concentrations. Once sensitization occurs, patients may experience severe clinical symptoms which can present with a persistent hypopigmentation when they are re-exposed to substances that contain or cross-react with PPD. Given the widespread use of PPD, TBHT could adversely affect the daily life of paediatric patients; thus, for this reason, this practice as a fashion accessory must be discouraged. In addition, it is extremely important to provide scientific information on the risks of TBHT to consumers, especially to adolescents and to the parents of younger children to prevent PPD sensitization. View Full-Text
Keywords: allergic contact dermatitis; henna; para-phenylenediamine; temporary black henna tattoo allergic contact dermatitis; henna; para-phenylenediamine; temporary black henna tattoo
►▼ Show Figures 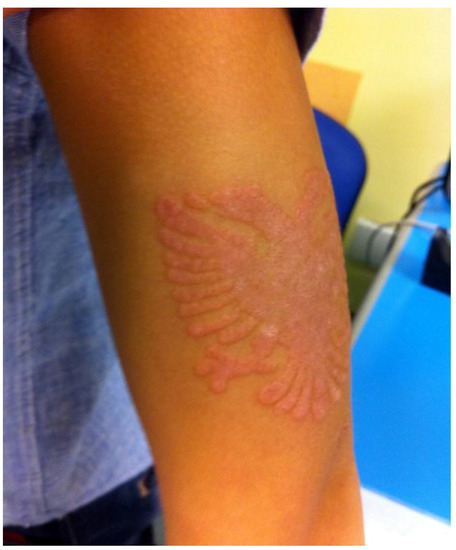