The Associations among Psychological Distress, Coping Style, and Health Habits in Japanese Nursing Students: A Cross-Sectional Study
Next Article in Special Issue

Asbestos Ban in Italy: A Major Milestone, Not the Final Cut

This paper provides a narrative of the national intervention strategy in Sweden aimed to restrict the industrial use of asbestos. For many years, asbestos was imported for widespread industrial use, resulting in large amounts throughout Swedish society. In 1972, the whistle was blown in a Communist Party parliamentary motion describing asbestos as a health hazard and requesting action to prohibit its use. Although the motion was rejected, it initiated the extensive charting of asbestos sources on a tripartite basis, involving government agencies, and employer and trade-union organizations. Restrictive asbestos management practices were enforced from July 1982. The year 1985 saw the Government Asbestos Commission review, covering use-determining factors, international regulations, and assessments of cancer risks. The relative risks of chrysotile and amphibole were considered internationally (by the IARC), since chrysotile (a Canadian export) was regarded as unharmful in Canada at that time. Prohibiting asbestos use resulted in its virtual disappearance as an import to Sweden from the early 1980s. However, asbestos has undergone a transition from an occupational to a public-health hazard (although some work-related hazards, such as handling and disposal, remain). The transition reflects the public’s exposure to existing stocks, in homes, workplaces, etc. Mesothelioma incidence has come to be regarded as an indicator of prevention effectiveness. View Full-Text
Keywords: asbestos; asbestosis; lung cancer; mesothelioma; occupational hazard; public-health hazard; disease prevention asbestos; asbestosis; lung cancer; mesothelioma; occupational hazard; public-health hazard; disease prevention
►▼ Show Figures 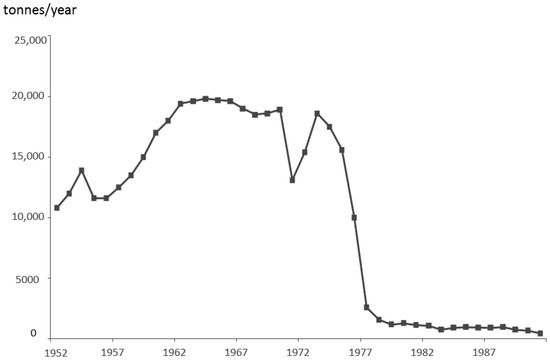