Influence of Afforestation on the Species Diversity of the Soil Seed Bank and Understory Vegetation in the Hill-Gullied Loess Plateau, China

Soil erosion is regarded as one of the global environmental problems which cause land degradation and ecosystem disequilibrium [1]. In the Chinese hill-gullied Loess Plateau region, soil erosion is frequent and serious because of the special climate, complex landform and intensive human activity [2,3]. Previously, a large part of the natural vegetation had been destroyed and the land turned into farmland, thus aggravating soil erosion and ecological degradation [3]. It is estimated that nearly 1.6 billion tons of soil are lost from the plateau each year, and droughts, floods, and dust storms are common occurrences [4]. Therefore soil and water conservation is a vital problem that compromises the safety of both ecosystem and society. Revegetation is an effective approach to control soil erosion and improve the ecosystem. The presence of grass or trees can reduce runoff and conserve soil and water [5,6,7]. Thus, slope farmlands have been increasingly abandoned for revegetation [2,3]. However, the spontaneous revegetation process is slow because serious soil erosion causes loss of soil nutrient and water [8], as well as of plant diaspore [9,10,11]. Seedling survival and growth are further limited by abiotic factors, such as high temperature and radiation, limited availability of soil water [12], and physic damage caused by storms and slope runoff [13,14]. Under such conditions, native species regeneration may benefit from habitat amelioration by afforestation, which counteracts the above abiotic stress factors [15,16]. To this aim, some fast-growing and drought-resisting woody species, such as Robinia pseudoacacia and Caragana korshinskii, are planted to accelerate revegetation and ecosystem restoration.
Afforestation is considered an important approach to rehabilitate degraded lands and their ecosystems [17,18]. Generally, a forest is planted to control soil erosion, improve soil traits, provide habitat for species conservation, and offer other ecological services [15,19,20]. In the artificial forest or shrubland, microclimate and nutrient cycle are modified [15,21,22] to influence the rate and trajectory of understory vegetation recovery and succession [23,24,25]. Herbaceous understory plays a key role in the restoration of biodiversity and in the conservation of soil and water in plantations. In temperate broadleaved forests, it forms the richest stratum in terms of plant diversity, and it influences the healthy development of the whole forest [26]. However, since afforestation influences the habitat and affects the understory plant recruitment and growth, intense debate surrounds the extent to which these anthropogenic forests protect or degrade biodiversity [24,27,28]. Tree species selections and site environments can also influence the subsequent species invasion and establishment, and later, the community structure and ecological function [19,27,29,30].
The presence of a native seed source in the vicinity and its successful dispersal to the artificial forest are necessary for native seeds to contribute to the restoration of native biodiversity [31]. The seed dispersal and soil seed bank both play important roles in species recruitment and succession [32,33]. Studies indicate that tree plantations can facilitate native species regeneration by attracting seed dispersal agents from nearby native communities [34]. Simultaneously, the soil seed bank is an important component of vegetation dynamics [35]. In forests, soil seed banks bear the marks of former land use and forest management, and play an important role in vegetation dynamics [36]. The historical land use is a key factor that can influence the soil seed bank composition for a long-period [37,38,39]. Although the original vegetation is destroyed during land preparation and tree planting, many species persist in the soil as seeds [37,40]. In particular, pioneer species with a large soil seed bank would control the herbaceous layer at an early stage of afforestation or after disturbance [39]. However, during the development of the plantation, many of the open-field species which are shade-intolerable will disappear and will be replaced by successional species or native understory species [41].
The Loess Plateau region in northwest China is well-known of its serious soil erosion. Afforestation is broadly used to control soil erosion, accelerate vegetation restoration, and improve ecological environments [18,42]. The ecological impact of afforestation becomes the focus of intense debate during the afforestation process [42,43]. Being afforestation a primary measure of intervention, its influence on the soil characteristics such as soil erodibility, soil water, soil fertility [44,45], and its ecological function on erosion control, catchment-water yield and soil carbon sequestration were the focus of previous studies [46,47,48]. However, there is scarce knowledge about whether afforestation modifies the habitat to affect structure and species diversity of the soil seed bank and understory vegetation. The objectives of the present study were to assess the influence of afforestation on the soil seed bank and understory vegetation after 30 years of natural succession.

This study was carried out in Zhifanggou watershed, which is located in An’sai county, in the Loess Plateau region (109°19′30′′ E, 36°51′30′′ N) at 1010–1431 m above sea level. The watershed has a semiarid climate with an average annual precipitation of 505 mm (1970–2006). Over 60% of the precipitation falls during the rainy season (July–September), usually in the form of storms. The annual evaporation is over 1460 mm, and the mean temperature is approximately 8.8 °C (from −11 °C to 30 °C). Within the study region, the landscape includes inter-gully slopes and gully slopes, and the land surface is fragmented by deeply incised and densely distributed gullies (gully density 8.06 km·km−2).
Although this area is located in the forest-steppe region, according to the literature the main body of the Loess Plateau appears to be covered by herbaceous or shrub species, but not by forest [49,50]. In fact, the native forest has almost been destroyed and replaced by typical steppe as a consequence of long-term human activity. Some native forest woody species are scattered over the steppe as isolated trees. The main native species in the different successional stages and landscapes are herbs, such as Artemisia scoparia, Artemisia gmelinii, Artemisia giraldii, Lespedeza davurica, Stipa bungeana, Bothriochloa ischaemun [44], and a few native shrubs, such as Rosa xanthina, Sophora viciifolia, and Syringa julianae. Broad planting species, such as R. pseudoacacia and C. korshinskii are also scattered throughout the landscapes.

In order to investigate the influence of afforestation on the soil seed bank, a south-facing slope planted with R. pseudoacacia and subject to natural succession for 30 years (Ps), and a north-facing slope planted with C. korshinskii and subject to natural succession for 30 years (Pn) were selected to collect soil samples. At the same time, south-facing and north-facing slope lands with remnant natural vegetation were selected (Rs and Rn, respectively). The soil samples prepared for germination experiments were collected in the four types of habitats. Nine plots, each 5 m × 5 m, were located on each habitat. At each plot, 20 soil cores (diameter 4.8 cm) were collected in the 0–10 cm soil layers. The soil samples were collected in April, July and October in 2009. Additionally, the data about two abandoned slope lands (one a south-facing slope and the other a north-facing slope) with spontaneous restoration for 30 years (As and An, respectively) were used for comparison with the afforestation site. The soil seed bank samples in these two slopes were collected in April, August, and October in 2005. Every time, six 10 cm × 10 cm soil samples of 0–10 cm in depth were collected separately from each slope. The understory vegetation and the standing vegetation on the remnant slope land and on the abandoned slope land were investigated in July of the study year. Three 1 m × 1 m quadrats were surveyed in each sampling plot. The species composition was studied by recording the species that grew in the quadrat. The density of a given species was calculated as the number of individuals of that species per square meter. The coverage of each plant species was estimated by two experts at the same time.

We characterized species richness, diversity and evenness in each habitat, in order to reveal the influence of afforestation on the soil seed bank and understory vegetation. Three species diversity indices were employed:

where S is the number of species, Pi is the proportion of individuals or the abundance of the ith species expressed as a proportion of the total number of species in the community, and ln is the natural logarithm.
In order to reveal the differences in species composition between the soil seed bank and standing vegetation in the same and different habitats, Sorensen similarity coefficient was employed: where CC is the Sorensen similarity coefficient; w is the number of species present in both plots; a and b are the number of species in each of the investigated plot.
Species were ascribed to functional groups: annuals and biennials, perennial grasses, perennial herbs, semi-scrubs and shrubs, trees.
The differences in species diversity in both the soil seed bank and standing vegetation over different habitats were analyzed using ANOVA. The soil seed density was transformed using log(x + 1) to satisfy the homogeneity of variance assumption.

The present study indicated that there is a positive influence of afforestation on the native species restoration, with respect to species diversity of the soil seed bank and standing vegetation. After 30 years of succession, the understory species composition was more similar to the one in the remnant slope than the one in abandoned land with natural restoration. Thus, in a stressed environment with serious erosion soil, afforestation with appropriate species can help the native species to resettle. However, there was rare native shrub resettling, and no tree species resettling in the plantation. More research is needed to determine whether this is caused by a lack of available propagule, or by the climate and deep Loess soil.

This study was supported by the National Science Foundation of China projects (41501290; 41371280). We acknowledged the assistance of State Key Laboratory of Soil Erosion and Dryland Farming on the Loess Plateau. 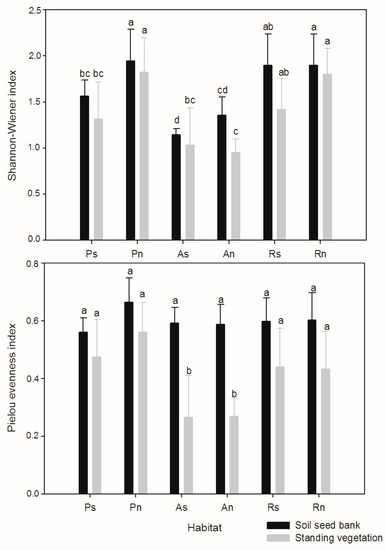