The Association of Serum Bisphenol A with Thyroid Autoimmunity

Introduction: Data on the association of bisphenol A (BPA) exposure and autoimmunity in humans is unclear. Objective: To elucidate the influence of BPA on thyroid autoimmunity, in the present study we assessed the association between serum BPA and thyroid autoantibodies. Methods: Serum samples from 2361 subjects, aged ≥15 years, from the Thai 4th National Health Examination Survey were measured for BPA, antithyroglobulin (TgAb), antithyroperoxidase (TPOAb) and antithyrotrophin receptor (TRAb) antibodies. Results: The proportion of subjects positive for TgAb, TPOAb and TRAb were 11.1%, 14.9% and 1.9%, respectively. With regard to BPA, 51.9% had serum BPA levels exceeding the detection limit of the assay (0.3). There was a significant increasing trend for subjects with TgAb (p < 0.05) and TPOAb (p < 0.001) positivity as BPA quartiles increased, particularly in the highest quartile. In contrast, no relationship between BPA quartiles and TRAb was found. Logistic regression analysis showed that age, gender and BPA quartiles were determinants of TPOAb or TgAb positivity, independent of BMI. However, only the association between BPA and TPOAb positivity was consistent in both men and women. Conclusions: BPA was independently associated with TPOAb positivity. However, its mechanism related to TPOAb positivity, subsequently leading to autoimmune thyroid disease, needs further investigation. View Full-Text
Keywords: bisphenol A; antithyroglobulin antibody; antithyroperoxidase antibody; antithyrotrophin receptor antibody; autoimmunity bisphenol A; antithyroglobulin antibody; antithyroperoxidase antibody; antithyrotrophin receptor antibody; autoimmunity
►▼ Show Figures 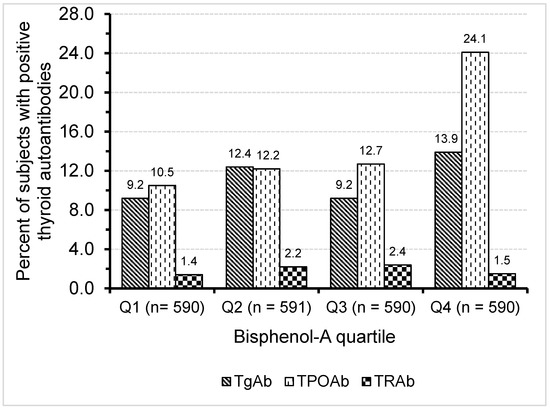 
Chailurkit, La-or, Wichai Aekplakorn, and Boonsong Ongphiphadhanakul. 2016. "The Association of Serum Bisphenol A with Thyroid Autoimmunity" International Journal of Environmental Research and Public Health 13, no. 11: 1153. https://doi.org/10.3390/ijerph13111153