Patterns of Smoking and Snus Use in Sweden: Implications for Public Health
Previous Article in Journal

Economic Evaluations of the Health Impacts of Weather-Related Extreme Events: A Scoping Review

Secular Trends in Growth and Nutritional Outcomes of Children under Five Years Old in Xiamen, China

The purpose of this study was to examine secular changes in growth and nutritional outcomes of Chinese urban children under five years old, in 2009, 2012, and 2015. Cluster random sampling methods were used to select children under five years old in Xiamen, one of five special economic zones in China. Subjects (N = 71,229) under five years old (39,413 boys, 31,816 girls) were examined at three different times (22,576 in 2009, 24,816 in 2012, and 23,837 in 2015). Significant differences in the boys’ height and weight (p < 0.05) were found across the three time points; subjects in the 2015 sample were the heaviest and tallest, and they had the highest BMI (2009 < 2015; 2012 < 2015). Among the girls, those in the 2015 sample were similar to the boys (2009 < 2012; 2012 < 2015). In general, similar patterns were observed when mean values were analyzed by age. An increasing trend was found in the prevalence of overweight and obesity and a decreasing trend for stunting, underweight, and wasting. The results revealed that the burden of childhood under- and over-nutrition might constitute a public health concern in modern China. View Full-Text
Keywords: children under five; China; obesity; overweight; under-nutrition children under five; China; obesity; overweight; under-nutrition
►▼ Show Figures 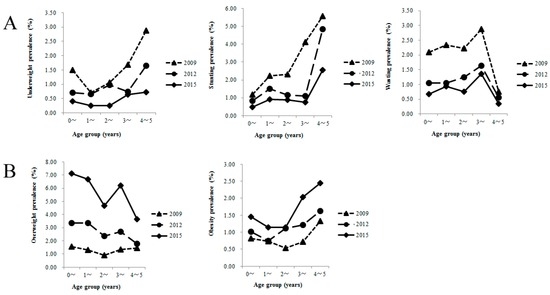