Association between Changing Mortality of Digestive Tract Cancers and Water Pollution: A Case Study in the Huai River Basin, China
Next Article in Special Issue

The Excess Heat Factor: A Metric for Heatwave Intensity and Its Use in Classifying Heatwave Severity
Previous Article in Journal

Water-Borne Diseases and Extreme Weather Events in Cambodia: Review of Impacts and Implications of Climate Change

Cambodia is prone to extreme weather events, especially floods, droughts and typhoons. Climate change is predicted to increase the frequency and intensity of such events. The Cambodian population is highly vulnerable to the impacts of these events due to poverty; malnutrition; agricultural dependence; settlements in flood-prone areas, and public health, governance and technological limitations. Yet little is known about the health impacts of extreme weather events in Cambodia. Given the extremely low adaptive capacity of the population, this is a crucial knowledge gap. A literature review of the health impacts of floods, droughts and typhoons in Cambodia was conducted, with regional and global information reviewed where Cambodia-specific literature was lacking. Water-borne diseases are of particular concern in Cambodia, in the face of extreme weather events and climate change, due to, inter alia, a high pre-existing burden of diseases such as diarrhoeal illness and a lack of improved sanitation infrastructure in rural areas. A time-series analysis under quasi-Poisson distribution was used to evaluate the association between floods and diarrhoeal disease incidence in Cambodian children between 2001 and 2012 in 16 Cambodian provinces. Floods were significantly associated with increased diarrhoeal disease in two provinces, while the analysis conducted suggested a possible protective effect from toilets and piped water. Addressing the specific, local pre-existing vulnerabilities is vital to promoting population health resilience and strengthening adaptive capacity to extreme weather events and climate change in Cambodia. View Full-Text
Keywords: flood; drought; extreme weather event; climate change; Cambodia; health; water-borne disease; diarrhoea flood; drought; extreme weather event; climate change; Cambodia; health; water-borne disease; diarrhoea
►▼ Show Figures 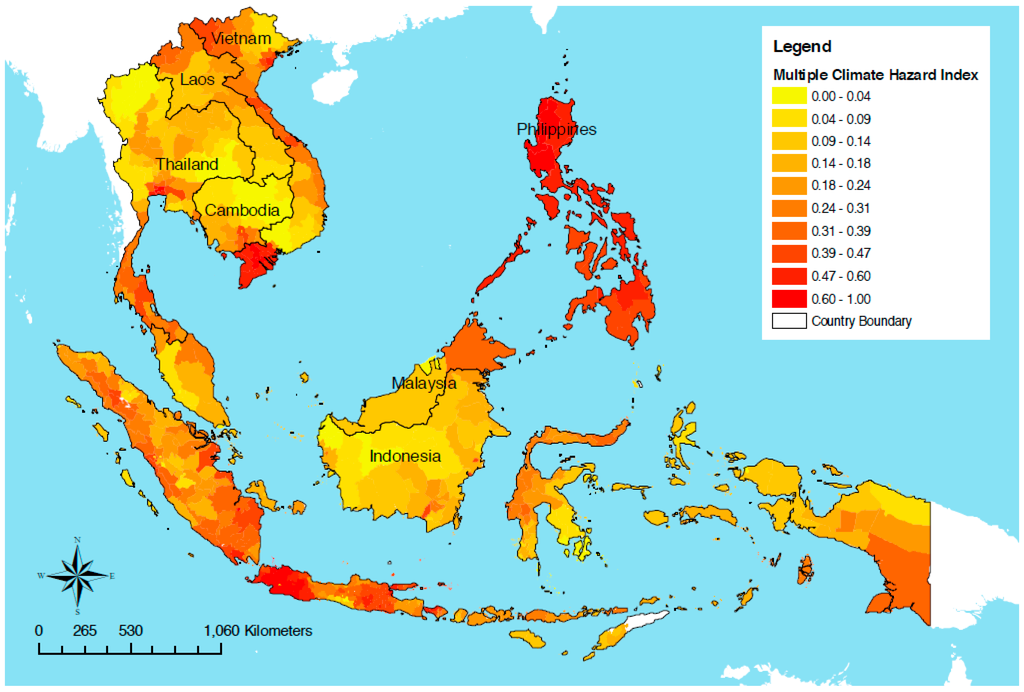