Regression Models for Log-Normal Data: Comparing Different Methods for Quantifying the Association between Abdominal Adiposity and Biomarkers of Inflammation and Insulin Resistance

Ischemic Heart Disease Hospitalization among Older People in a Subtropical City — Hong Kong: Does Winter Have a Greater Impact than Summer?

Globally, excess winter morbidity from ischemic heart disease (IHD) is reported. In subtropical regions, there is a need to quantify the difference in the adverse effect of cold winters compared with hot summers, particularly among the older people. Our objectives were to: (i) compare the effect of winter on IHD hospitalizations with that of summer; (ii) examine temporal trends in the excess winter hospitalizations; and (iii) investigate the effect of age, gender, and meteorological factors on predicting such excess. Inpatient admissions due to IHD as principal cause during June 2000 to February 2009 in public hospitals of Hong Kong were extracted for the population aged ≥65. An Excess Hospitalization in Winter vs. Summer (EHWS) Index was used to contrast the adverse effect of weather on hospitalizations in winter vs. summer. Multiple linear regressions were used to investigate the trend and the predictors of such index. It was found that in a subtropical city, greater effect of winter on IHD hospitalizations than summer was observed, particularly among the oldest old (an index of 61.5% (95% CI: 49.5%–74.4%) for men aged ≥85 and 32.3% (95% CI: 25.5%–39.5%) for women aged ≥85). There was significant increasing trend in the index among those aged ≥85 but the age difference was less prominent among the women. Absolute level of coldness was not a significant factor, whereas the change in temperature was a significant factor, which implies that great fluctuation in temperature within a winter day had greater impact on occurrence of circulatory disease than an absolute temperature threshold. View Full-Text
Keywords: excess winter morbidity; hospitalization; cold weather; subtropical climate; Hong Kong; older population; ischemic heart disease excess winter morbidity; hospitalization; cold weather; subtropical climate; Hong Kong; older population; ischemic heart disease
►▼ Show Figures 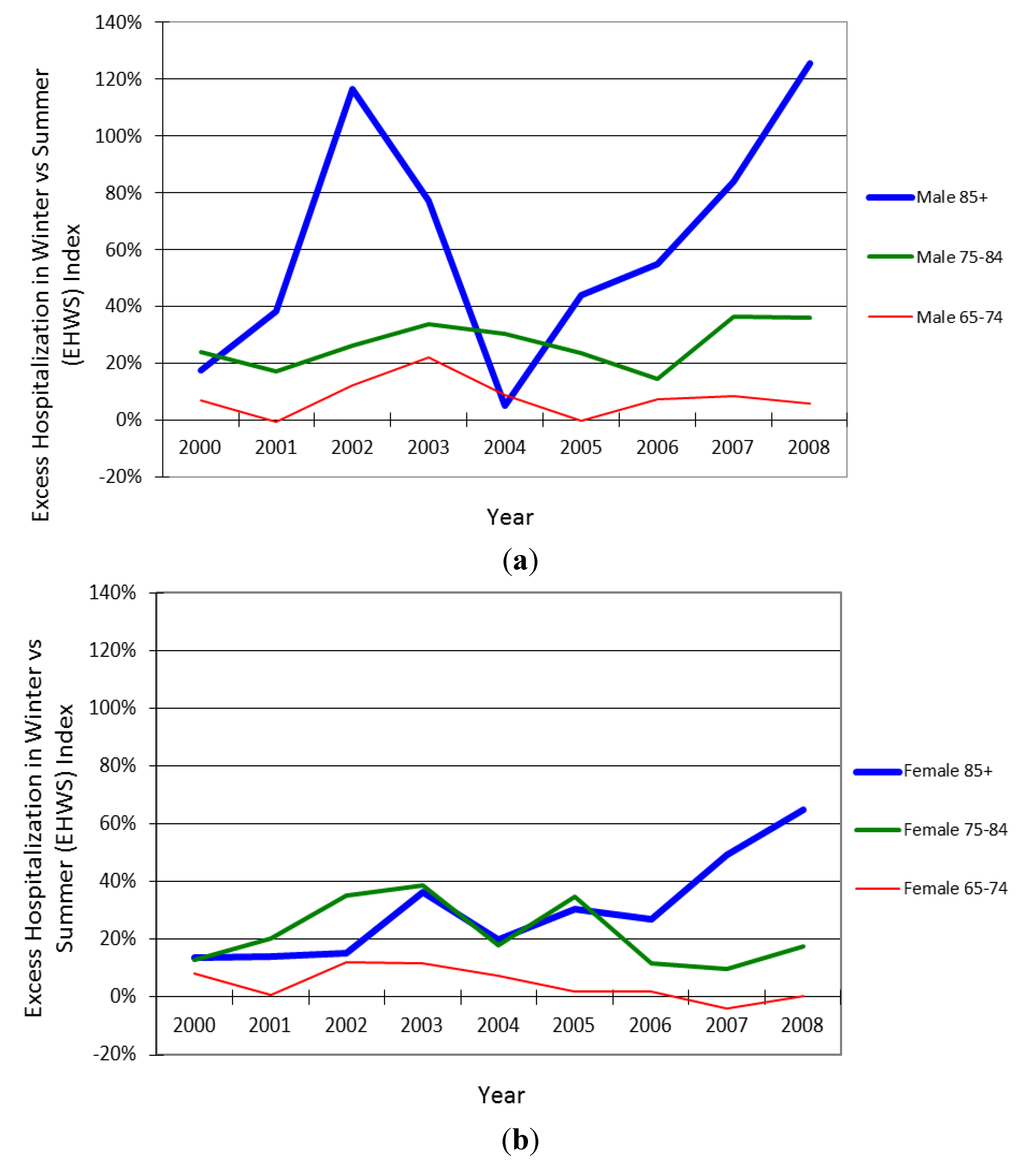