Awareness, Trial, and Current Use of Electronic Cigarettes in 10 Countries: Findings from the ITC Project
Previous Article in Special Issue

How Has the Availability of Snus Influenced Cigarette Smoking in Norway?

Background: In Norway, low-nitrosamine smokeless tobacco (snus) is allowed to compete with cigarettes for market share. We aimed to study how the availability of snus influenced overall tobacco consumption, smoking initiation and smoking cessation. We discuss whether the Norwegian experience with snus can have any transfer value for e-cigarettes. Methods: We analysed consumption data from registered and unregistered supply sources of tobacco. We calculated quit-smoking ratios across snus use status in nine datasets comprising a total of 19,269 ever-smokers. Trends in snus use and smoking were derived from time-series of annual; cross-sectional; nationally representative surveys for the period 1985–2013. Results: The market share for snus increased from 4% in 1985 to 28% in 2012, but overall tobacco consumption decreased by 20.3% over this same period. Snus was the most common method for smoking cessation. Compared with smokers with no experience of using snus, the quit ratio for smoking was significantly higher for daily snus users in seven of the nine datasets analysed. Among young male adults, the prevalence of smoking (daily + occasional) was reduced from 50% in 1985 to 21% in 2013. Over the same period, use of snus increased from 9% to 33%. This negative correlation (r = −0.900, p < 0.001) was also observed among young females (r = −0.811, p < 0.001), but the trend shift in tobacco preferences occurred some years later. Conclusions: The experience with snus in Norway might indicate what will happen when alternative nicotine products––are allowed to compete with cigarettes in the nicotine market. View Full-Text
Keywords: smokeless tobacco; snus; e-cigarettes; smoking smokeless tobacco; snus; e-cigarettes; smoking
►▼ Show Figures 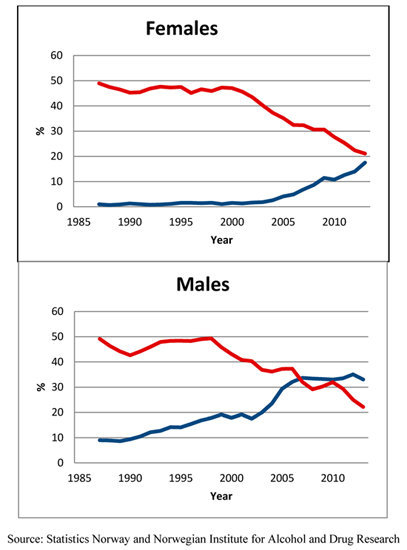