Effectiveness of the Electronic Cigarette: An Eight-Week Flemish Study with Six-Month Follow-up on Smoking Reduction, Craving and Experienced Benefits and Complaints

Background: Smoking reduction remains a pivotal issue in public health policy, but quit rates obtained with traditional quit-smoking therapies remain disappointingly low. Tobacco Harm Reduction (THR), aiming at less harmful ways of consuming nicotine, may provide a more effective alternative. One promising candidate for THR are electronic cigarettes (e-cigs). The aim of this study was to investigate the efficacy of second-generation e-cigs both in terms of acute craving-reduction in the lab and in terms of smoking reduction and experienced benefits/complaints in an eight-month Randomized Controlled Trial (RCT). Design: RCT with three arms. Methods: Participants (N = 48) unwilling to quit smoking were randomized into two e-cig groups and one control group. During three lab sessions (over two months) participants, who had been abstinent for four hours, vaped/smoked for five minutes, after which we monitored the effect on craving and withdrawal symptoms. eCO and saliva cotinine levels were also measured. In between lab sessions, participants in the e-cig groups could use e-cigs or smoke ad libitum, whereas the control group could only smoke. After the lab sessions, the control group also received an e-cig. The RCT included several questionnaires, which repeatedly monitored the effect of ad libitum e-cig use on the use of tobacco cigarettes and the experienced benefits/complaints up to six months after the last lab session. Results: From the first lab session on, e-cig use after four hours of abstinence resulted in a reduction in cigarette craving which was of the same magnitude as when a cigarette was smoked, while eCO was unaffected. After two months, we observed that 34% of the e-cig groups had stopped smoking tobacco cigarettes, versus 0% of the control group (difference p < 0.01). After five months, the e-cig groups demonstrated a total quit-rate of 37%, whereas the control group showed a quit rate of 38% three months after initiating e-cig use. At the end of the eight-month study, 19% of the e-cig groups and 25% of the control group were totally abstinent from smoking, while an overall reduction of 60% in the number of cigarettes smoked per day was observed (compared to intake). eCO levels decreased, whereas cotinine levels were the same in all groups at each moment of measurement. Reported benefits far outweighed the reported complaints. Conclusion: In a series of controlled lab sessions with e-cig naïve tobacco smokers, second generation e-cigs were shown to be immediately and highly effective in reducing abstinence induced cigarette craving and withdrawal symptoms, while not resulting in increases in eCO. Remarkable (>50 pc) eight-month reductions in, or complete abstinence from tobacco smoking was achieved with the e-cig in almost half (44%) of the participants. View Full-Text
Keywords: electronic cigarette; smoking reduction; tobacco harm reduction electronic cigarette; smoking reduction; tobacco harm reduction
►▼ Show Figures 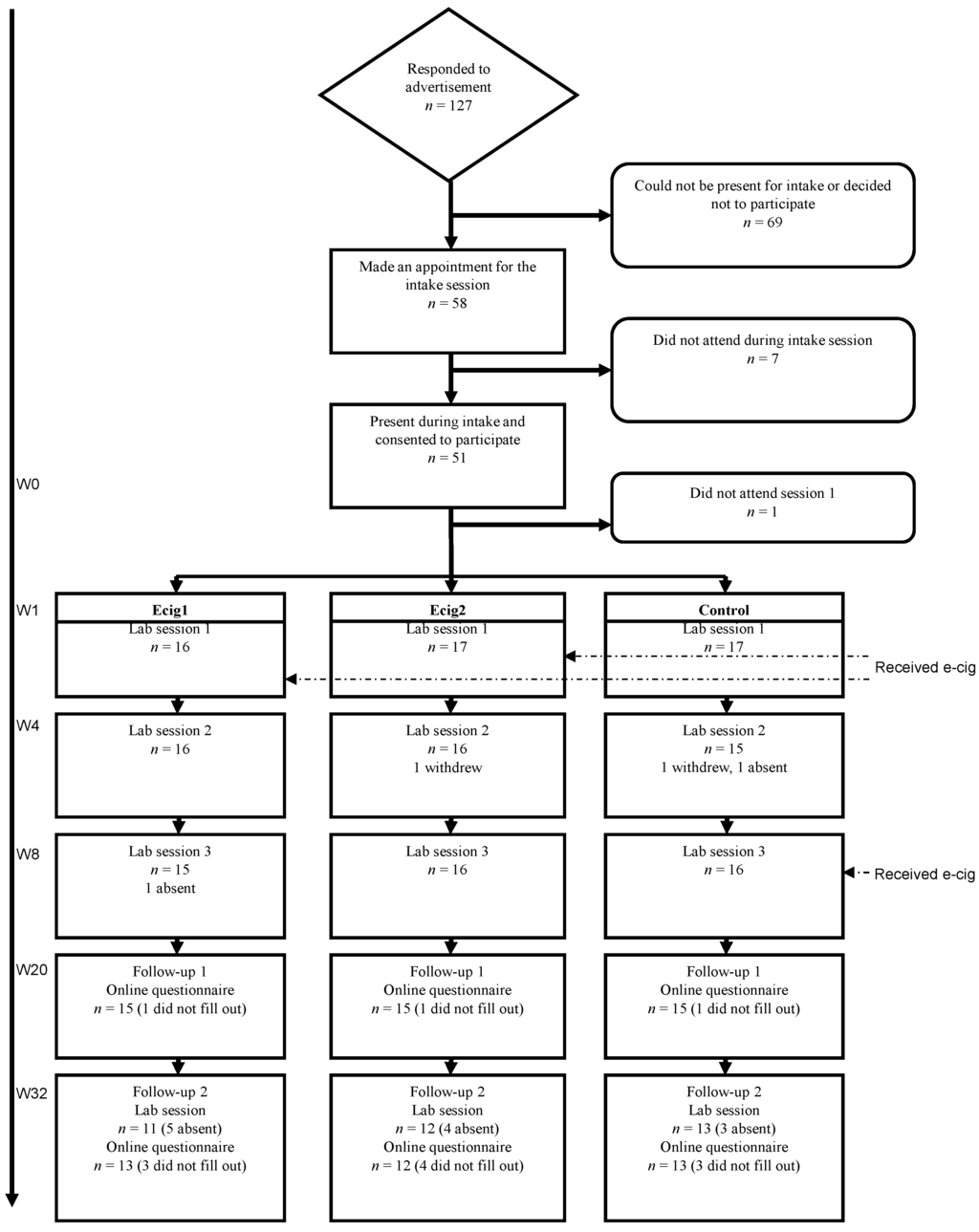