The Changing Epidemiology of Kunjin Virus in Australia

Numerous regional studies have demonstrated the importance of a single or few avian species in the local amplification of West Nile virus (family Flaviviridae, genus Flavivirus, WNV). Dubbed a super spreader, the American robin (Turdus migratorius; AMRO) has been shown to be the primary host responsible for the majority of infected mosquitoes in independent studies in Washington, DC [1], Illinois [2,3], and Colorado [4]. Though none of these studies has implicated a significant role for the Eastern bluebird (Sialia sialis; EABL) in the amplification of WNV, its close taxonomic relation to the AMRO (both members of the family Turdidae) suggest that WNV infection in EABL may be similar. West Nile virus host competence has been shown to vary more between taxonomic families than within them [5]. Several studies have documented WNV infection in EABL [6,7,8,9,10]. One study in particular documented seroprevalence as high as 36% in EABL, indicating frequent contact with WNV-infected vectors [6]. Hatch-year birds, in particular nestlings, may be particularly important to avian arbovirus transmission due primarily to their susceptibility to infection as well as being confined to nests, lacking protective feather coverage of adults, and exhibiting weak defensive behavior [11,12,13].
Zoonotic pathogens, such as WNV, have been suggested to exist within transmission networks where relationships among multiple host and vector species structure transmission rather than traditional transmission cycles among single host and vector species [14]. The frequency of vector contacts within these host networks is a critical parameter in understanding the transmission ecology of WNV [15]. Despite the importance of vector-host contact rates on the transmission of WNV, they remain relatively understudied due primarily to the logistical costs of inferring contact rates via blood feeding studies or direct observation of vectors seeking hosts [16,17]. The use of vector-host contact rates to predict local WNV activity would aid the planning and implementation of WNV prevention and control activities.
We hypothesized that interaction between vectors and hosts occupying primary WNV network nodes (super spreaders) such as AMRO may be modeled by the vector-nestling interaction in a closely related species, EABL. Though EABL and AMRO exhibit differences in their nesting behavior, EABL usage of nest boxes makes this species a widely studied and convenient model. Accordingly, we investigated the relationship between WNV infection of bluebird nestlings and vector-host contact rates among these nestlings to determine whether monitoring EABL-vector contact rates might predict local WNV transmission intensity. In addition, we assessed whether temporal variation in observed host-seeking rates among mosquitoes was associated with nestling abundance, vector abundance, or the ratio of nestlings to vectors.

The study took place throughout suburban and rural Henrico County, Virginia, USA (Figure 1). Bordering the city of Richmond, Henrico County is primarily a suburb of the city. Since 2001, the Henrico Standing Water Initiative (HSWI) has demonstrated annual evidence of WNV infection in birds, mosquitoes, and/or humans [18]. 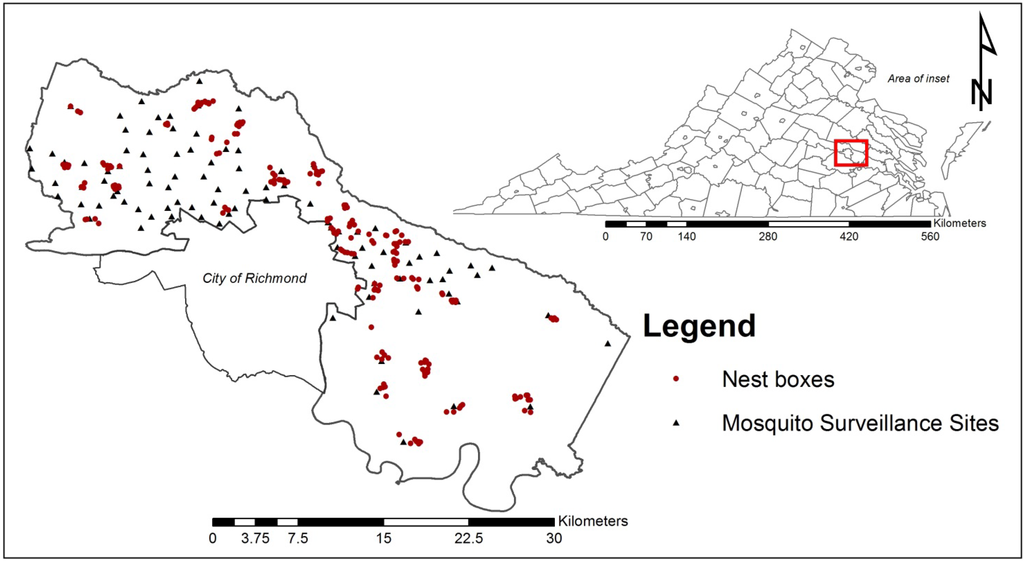 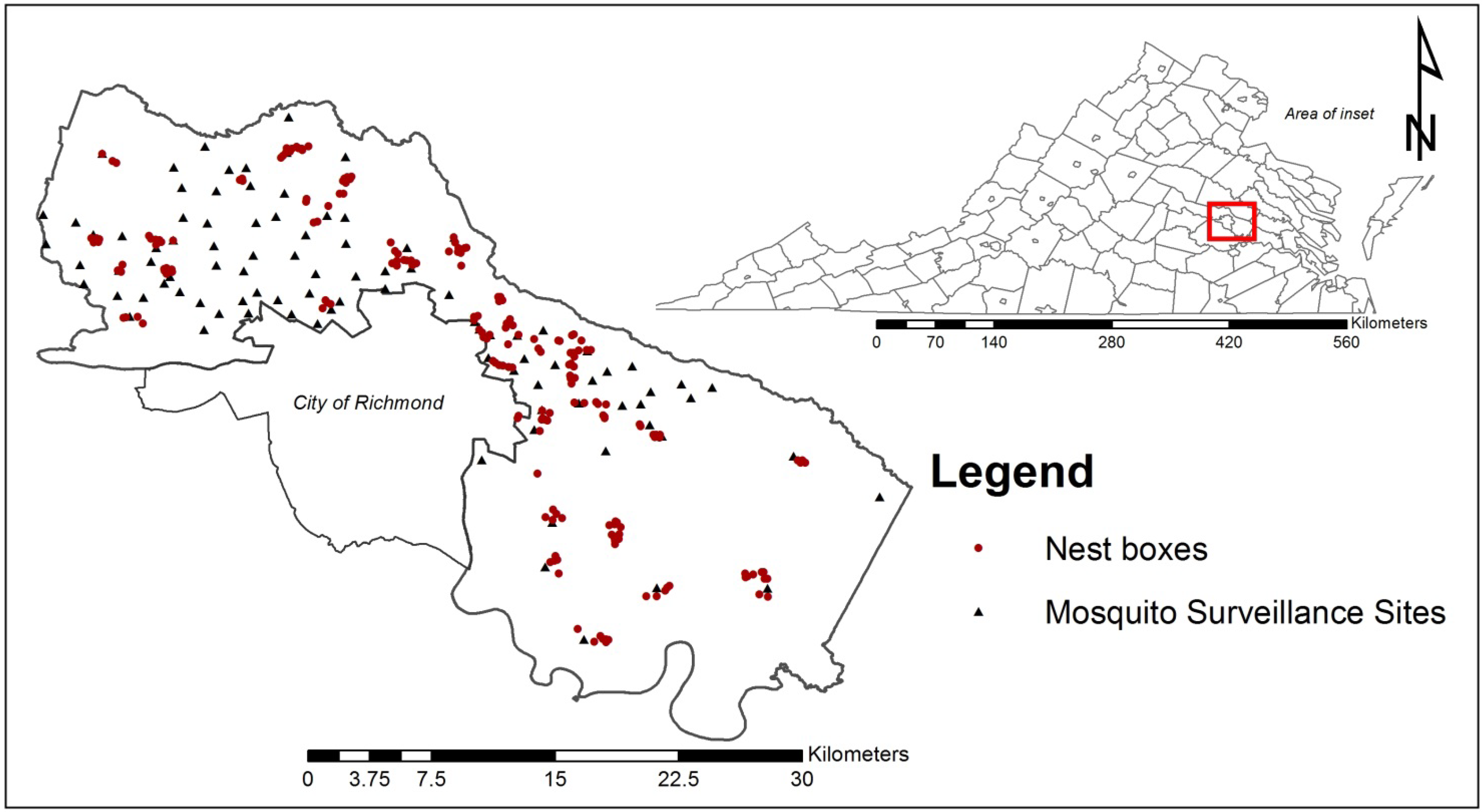 We constructed and placed 210 nest boxes throughout the study area (Figure 1). Nest boxes were distributed in both historically active and inactive WNV transmission areas. We identified potential nest box sites by manually reviewing aerial imagery (updated December 2011) in ArcMap 10.0 (ESRI, Redlands, CA, USA) for the following criteria in order of priority: (1) within 1 km of HSWI mosquito surveillance sites, (2) having preferred EABL habitat (e.g., open tracts of lawn or meadow with occasional tree lines), (3) easily accessible by vehicle or foot, and (4) at least 150 m distant from another nest box.

We monitored nest boxes weekly from 21 May 2012 until the final nestling fledged on 16 August 2012. Occupancy status, species, presence and number of eggs, nestling condition and number, and the approximate age (days post-hatching) were recorded. Nest boxes containing nestlings were visited every 1–3 days to assess vector host-seeking rates and to monitor nestlings for WNV infection. To assess the temporal relationship among nestling abundance and vector host-seeking rates, we averaged nestling abundance across the study area for six two-week time intervals spanning the mid to late avian nesting season.

We monitored nestling WNV infection status every four to five days while nestlings occupied the nest boxes. On 4th or 5th day post-hatching, EABL nestlings were banded with numbered bands (USGS permit #22751 and Virginia Department of Game and Inland Fisheries permit #041077) to identify each from their siblings. Animal handling protocols were approved by the Virginia Commonwealth University Animal Care and Use Committee (IACUC #AM10230). Nestlings of other species occupying the nest boxes (including House Sparrows (HOSP), House Wrens (HOWR), and Tree Swallows (TRSW)) were marked with unique paint markings on the tarsal claws. The oral-pharyngeal cavity of each nestling was swabbed with a Dacron-tipped swab every 4th or 5th day until they fledged, or were otherwise dispatched (predated, missing, or found dead). Specimens were transported on dry ice to the laboratory where the presence of infectious WNV was investigated by plaque assay using Vero cell monolayers overlaid with 0.5% agarose in 6-well plates [19].

We monitored mosquito host-seeking rates using a modification of the original Nest Mosquito Trap (NMT) design [17] starting on 12 June 2013. This modification was made to increase the durability of the trap’s materials. Twenty-five modified NMTs were constructed of 0.59 cm-thick polycarbonate sheet plastic (Lexan®) instead of the original thin polypropylene container that had a tendency to warp with solar exposure.
Only nest boxes that contained nestlings (55 of 210) were sampled with modified NMTs for host-seeking mosquitoes (Figure 2). Twice a week up to 25 NMTs/night were operated at nestling occupied nest boxes regardless of avian species. Traps were operated continuously overnight for 19–21 h. Nest Mosquito Traps were retrieved in the same order they were deployed to ensure equal running time between the subjects. In the laboratory, female mosquitoes were categorized using description of the blood meal taken, i.e., unfed/empty, engorged, half engorged/half gravid, or gravid. Mosquitoes were then enumerated and identified to species using regional identification keys [20]. All collected mosquitoes were tested via RAMP® (Response Biosciences, Vancouver, BC, Canada) for presence of WNV.

We estimated the per nestling host-seeking rate (hereafter estimated Host-Seeking Rate (eHSR) by adjusting the number of mosquitoes collected per nest box per trap night by a previously determined [17] laboratory capture efficiency ratio of (32.1%) and dividing the estimated scaled mosquito total by the number of nestlings within each nest box. Specifically, eHSR = (1/0.321) × observed mosquito count/number of nestlings.

We assessed the 55 site-averaged temporal associations among the mean eHSR and the 96 site-averaged WNV IR at six two-week intervals consistent with the temporal resolution of the IR data. These six biweekly rounds spanned the mid to late avian nesting season which has been associated with WNV amplification [15]. We also assessed whether the observed host-seeking rates were associated with mean ambient Culex spp. abundance, nestling abundance, and the ratio of ambient Culex spp. abundance to nestling abundance over the time periods using non-parametric Kendall’s tau correlations. Due to the sixth period (12–26 August) containing only two eHSR samples, we performed a secondary analysis excluding the final round of data.
To evaluate the spatial relationship between eHSR and WNV status over the study period, we used a two-step modeling approach. Because nestling and mosquito monitoring sites were not spatially coincident, we first fitted a kriging model to predict the season-averaged eHSR at mosquito monitoring sites. eHSR was natural log transformed to follow a more normal distribution prior to kriging. We estimated a spherical variogram model and used an ordinary kriging model. The range of the estimated spherical variogram model was 15,103 feet. We then used the predicted transformed eHSR in a logistic regression model to explain the odds of WNV presence. Statistical analysis was conducted in the R computing environment [22].

Table 1. Physiological status of the 117 female mosquitoes collected by the Nest Mosquito trap.
A total of 697 oral-pharyngeal swabs were taken from 319 individual nestlings within 74 individual broods from the 55 occupied nest boxes. Proportional to the species occupation of nest boxes, most of the swabs were taken from EABL (90.6% of sample; n = 289 nestlings). Additional nestling species swabbed included HOSP (1.3%; n = 4), HOWR (1.9%; n = 6), and TRES (3.1%; n = 10). A mean of 2.1 swabs per nestling ± 0.06 SE (Range 1–5) were taken over the course of the nestling periods. Seven nestlings found dead were also tested for the presence of WNV. None of the 697 swabs or seven dead nestling brain samples tested positive for WNV by plaque assay.
Estimated host-seeking rates calculated for Culex spp. mosquitoes collected in NMTs varied across nestling host species (Table 2), but the low number of sampling events for non-EABL birds did not allow for a statistical comparison of eHSR across host species. The Culex spp. eHSR mean/trap night across all time periods and spatial units was 0.7 ± 0.44 SE (n = 230). Host-seeking rates varied across the six biweekly time periods assessed (1 June–26 August) (Table 3 and Figure 3). Site aggregated mean eHSR by collection round peaked at 1.4 ± 1.13 (n = 55) during round 2 (16–30 June). 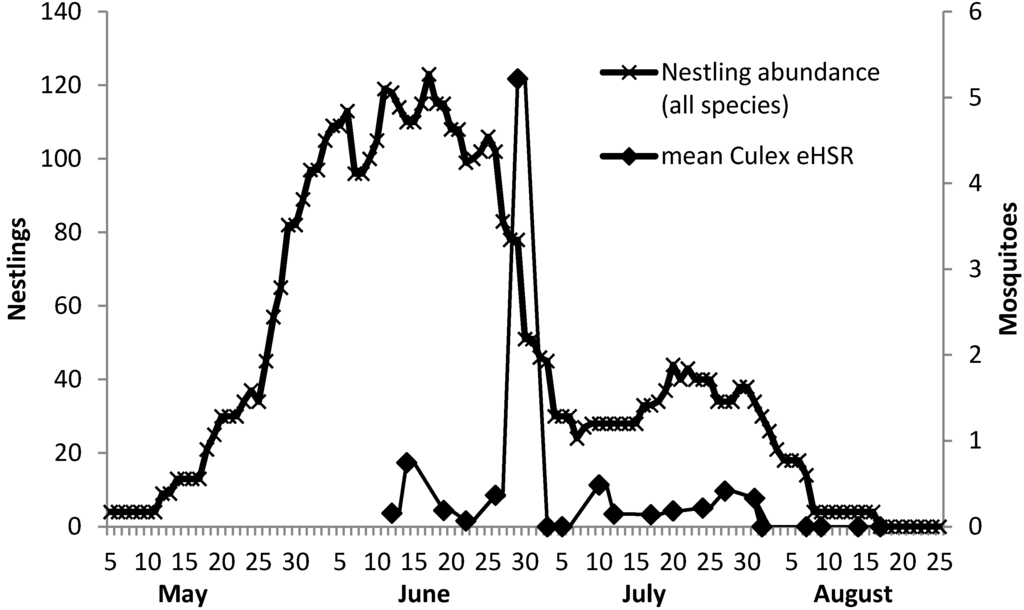 Despite high WNV activity in nearby areas, we did not detect WNV among nestlings or mosquitoes occupying next boxes in this study. Temporal variation in observed host-seeking rates was associated with vector and nestling host abundance. The lack of an observed role of nestling EABL in local WNV transmission in our study suggests that monitoring vector biting rates on nestling EABL is likely not a sensitive indicator of local human WNV risk.

The authors thank Randy Buchanan, Lane Carr, Jennifer Welch and the seasonal staff at the Henrico County Standing Water Initiative for the use of their mosquito surveillance network data. Thanks to Nick Panella for his assistance with preparing specimens for testing. Thanks also to James Cox for helping with nest box construction. Eric Krause assisted with nest box monitoring. We are grateful to the public and private land owners of Henrico County who granted us site access. Bird banding was conducted under USGS Banding Permit #22751 and Virginia Department of Game and Inland Fisheries permit #041077. Bird handling was approved by the Virginia Commonwealth University Animal Care and Use Committee (IACUC Protocol #AM10230). Project support funds were provided by the AD Williams’ Fund of the Virginia Commonwealth University (VCU) and the VCU CTSA (UL1RR031990 from the National Center for Research Resources). 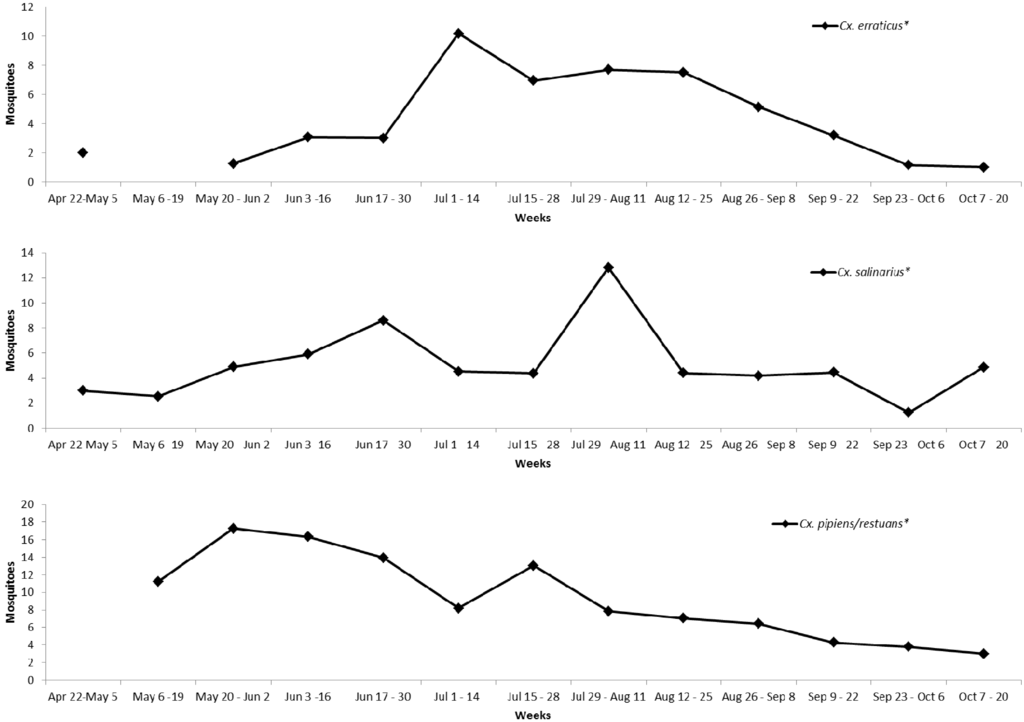