On a Beam of Light: Photoprotective Activities of the Marine Carotenoids Astaxanthin and Fucoxanthin in Suppression of Inflammation and Cancer
Previous Article in Journal

Antitumour Effects of Astaxanthin and Adonixanthin on Glioblastoma

2.1. Astaxanthin and Adonixanthin Suppressed the Growth of Glioblastoma Cells

2.2. Astaxanthin and Adonixanthin Suppressed the Migration of Glioblastoma Cells

2.3. Astaxanthin and Adonixanthin Decreased the Expression of Some Proteins to Promote Cell Growth and Migration

2.5. Concentrations of Astaxanthin and Adonixanthin in Murine Serum and Tissues

2.6. The Effects of Astaxanthin and Adonixanthin on Body Weight

U251MG, GL261, or U87MG cells were seeded onto 96-well plates at a density of 2 × 103 cells/well with DMEM supplemented with 10% FBS and then incubated for 24 h, after which the culture medium was changed to DMEM containing 10% FBS. Then, astaxanthin, adonixanthin or temozolomide (Tokyo Chemical Industry Co., Ltd., Tokyo, Japan) were added to the culture. Cell proliferation was determined using the CCK-8 assay according to the manufacturer’s instructions (Dojindo, Kumamoto, Japan). After each incubation, 10 μL of CCK-8 solution were added to each well. Plates were incubated for 3 h for 37 °C, and the absorbance was read at 450 nm with a reference wavelength of 630 nm using a Varioscan Flash 2.4 microplate reader (Thermo Fisher Scientific, Waltham, MA, USA).

The cell migration assay was conducted as previously described [44].
GL261 cells and U251 cells (2.0 × 104 cells per well) were plated in a 12-well plate (BD Biosciences, Tokyo, Japan) with culture medium supplemented with 10% FBS. After 24 h of incubation, the medium was changed to DMEM containing 1% FBS. After 6 h, wounds were scratched by a P1000 pipette tip and washed with phosphate-buffered saline (PBS) to eliminate cell debris. Then, fresh medium was added with 10 µM astaxanthin or adonixanthin. Pictures were taken at 48 h and these scratched areas were measured using an All-in-One Fluorescence Microscope (BZ-X710; Keyence, Osaka, Japan). The cell migration rate was measured the area of the wound before migration (S0) and after migration (S1) and calculated S1/(S0−S1) × 100. The control group was then standardized to be 100%. Wound widths at 0 h were created within 1 to 1.5 mm and data were excluded if they were not suitable for that width.

GL261 cells were seeded onto 96-well plates at a density of 2 × 103 cells/well with DMEM supplemented with 10% FBS and then incubated for 24 h, after which the culture medium was changed to DMEM containing 10% FBS. Then, astaxanthin, adonixanthin, or temozolomide (Tokyo Chemical Industry Co., Ltd., Tokyo, Japan) were added to the culture. Cell death was measured by Hoechst 33,342 (Invitrogen, Carlsbad, CA, USA) and propidium iodide (Invitrogen). At 96 h after treatment, the Hoechst 33,342 and propidium iodide were added to the medium to final concentrations of 8.1 and 1.5 µM, respectively, for 15 min. Images of stained cells were captured with a Lionheart™ FX Automated Microscope (BioTek, Tokyo, Japan). The percentage of propidium iodide-positive cells was determined by distinguishing Hoechst 33,342 and propidium iodide fluorescence.

Intracellular radical activation within GL261 cells was measured with 5-(and-6)-chloromethyl—2′,7′-dichlorodihydrofluorescein diacetate, acetyl ester (CM-H2DCFDA; Thermo Fisher Scientific, MA, USA). Six hours after treatment of temozolomide, astaxanthin, or adonixanthin, CM-H2DCFDA was added to the culture medium and incubated at 37 °C for 1 h under shading in GL261. Fluorescence was measured using a Varioscan Flash 2.4 microplate reader (Thermo Fisher Scientific, MA, USA) at 485 (excitation)-535 nm (emission). Measurements were performed 0, 30, and 60 min after the addition of CM-H2DCFDA.

All experimental design and procedures were approved by the murine experiment committees of Gifu Pharmacological University and were in compliance with ARRIVE (Animal Research: Reporting in Vivo Experiments) guidelines. These experiments were approved by the animal experiment committees of Gifu Pharmaceutical University, Japan (Ethic nos. 2018-099, 2019-065). For all experiments, male C57BL/6J mice (8 weeks old; body weight 22~27 g) and male ICR mice (6 weeks old; body weight 25~28 g) purchased from Japan SLC, Inc. (Hamamatsu, Shizuoka, Japan) were used. Animals were housed at 24 ± 2 °C under a 12-h light-dark cycle. Food and water were available to all animals ad libitum. All experimental procedures and outcome assessments were performed in a blinded manner.

Murine glioblastoma cell (GL261) transplantation was performed as previously described [39]. Briefly, mice received an intracranial injection of 1 × 105 cells in 2 µL of PBS using a Hamilton microliter syringe at the following coordinates: 1 mm anterior, 2 mm lateral (left of middle) to bregma, at a depth of 3 mm from the dural surface. This protocol was completed using a stereotactic frame.

In the experiment of the murine orthotopic glioblastoma model, oral administration of each astaxanthin (10 and 30 mg/kg) and adonixanthin (10 and 30 mg/kg) was initiated 3 days after intracranial injection of GL261 cells and was continued for 10 days. In the experiment of the brain tissue absorption with oral astaxanthin or adonixanthin, after one week of adaptation, ICR mice were randomly divided into the following three groups: control group, astaxanthin group (50 mg/kg), and adonixanthin group (50 mg/kg). Mice were orally administered each reagent suspended in olive oil (5 mL/kg) by the daily single dose for 10 days. The control group was treated by olive oil alone (5 mL/kg).
Since 50 mg/kg is known to be a dose of astaxanthin that does not show adverse effects even with long-term administration, this dose of astaxanthin and adonixanthin was used in the distribution experiment of this study. Moreover, it was reported that the oral administration of astaxanthin at 25 mg/kg inhibited hippocampal inflammation in diabetic mice [45]. Thus, we set up a dose similar to that in the present study.

Mice were euthanized and transcranial perfused with cold saline for 2 min at room temperature. After that, the perfusate was changed to 0.1 M phosphate buffer (PB; pH 7.4) containing 4% paraformaldehyde (PFA, Wako Pure Chemicals, Osaka, Japan) for 3 min. Brains were fixed in 4% paraformaldehyde, embedded in paraffin (Leica Biosystems, Wetzlar, Germany), cut into 5-µm sections, and processed for haematoxylin-eosin (HE) staining. Pictures were taken using an All-in-One Fluorescence Microscope (BZ-X710; Keyence, Osaka, Japan). We assessed the maximum cross-sectional area of the tumour and tumour volume as described previously [46].

In mice, blood samples were collected under anaesthesia by using sodium pentobarbital (50 mg/kg, 10 mL/kg, i.p). To separate serum and from blood, we centrifuged at 1700 g for 10 min. After mice were euthanized by exsanguination under deep anaesthesia, tissues, such as brain, were picked. Furthermore, the cerebral cortex, cerebellum, striatum, and hippocampus were separated from the whole brain.
All samples, including serum and tissues, were stored at −80 °C until the analysis of astaxanthin and adonixanthin was performed.

4.15. Analysis of Astaxanthin and Adonixanthin

Carotenoid fraction was collected from blood and some tissues by silica gel HPLC using a Cosmosil 5SL-II column with acetone:hexane (2:8, v/v) for the mobile phase at a flow rate of 1.0 mL/min as described above. This fraction was evaporated to dryness, dissolved in isopropanol: hexane (4:96, v/v), and subjected to chiral HPLC. Identification of each carotenoid was performed by authentic carotenoids obtained from Paracoccus (ENEOS Corporation, Tokyo, Japan) by our routine methods [47] and the content of each carotenoid was calculated from peak areas by comparison with the authentic samples.

All data are presented as mean ± standard error of the mean (SEM). We performed the experiments assuming normality and selected an appropriate statistical analysis method depending on the presence or absence of equal variance. Specifically, student’s t-test or Welch’s test was used in the case of equal or non-equal variance under Bonferroni correction in Figure 2D, Figure 3, Figure 4, Figure 5B, and Figures S3–S5. We used a one-way analyses of variance (ANOVA) followed by Tukey’s test or Games-Howell’s test for multiple comparisons in Figure 2A, Figure 2B, Figure 5A, Figure 6, Figures S1 and S2; and the Mann–Whitney U-test for two-group comparisons in Table 2 and Supplementary Material Table S1. These statistics were performed by SPSS Statistics (IBM, Armonk, NY, USA) software. p < 0.05 was considered statistical significance. 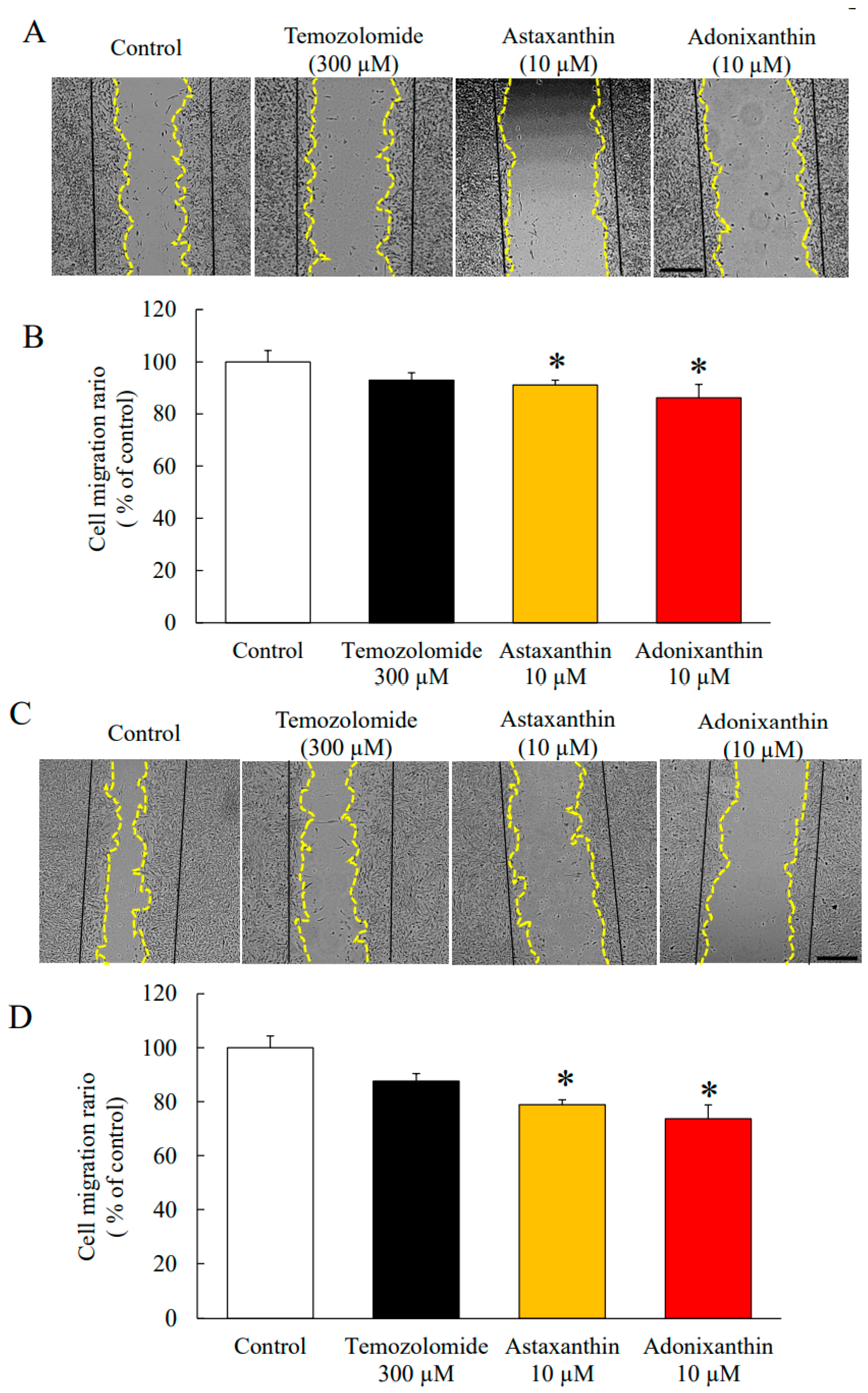 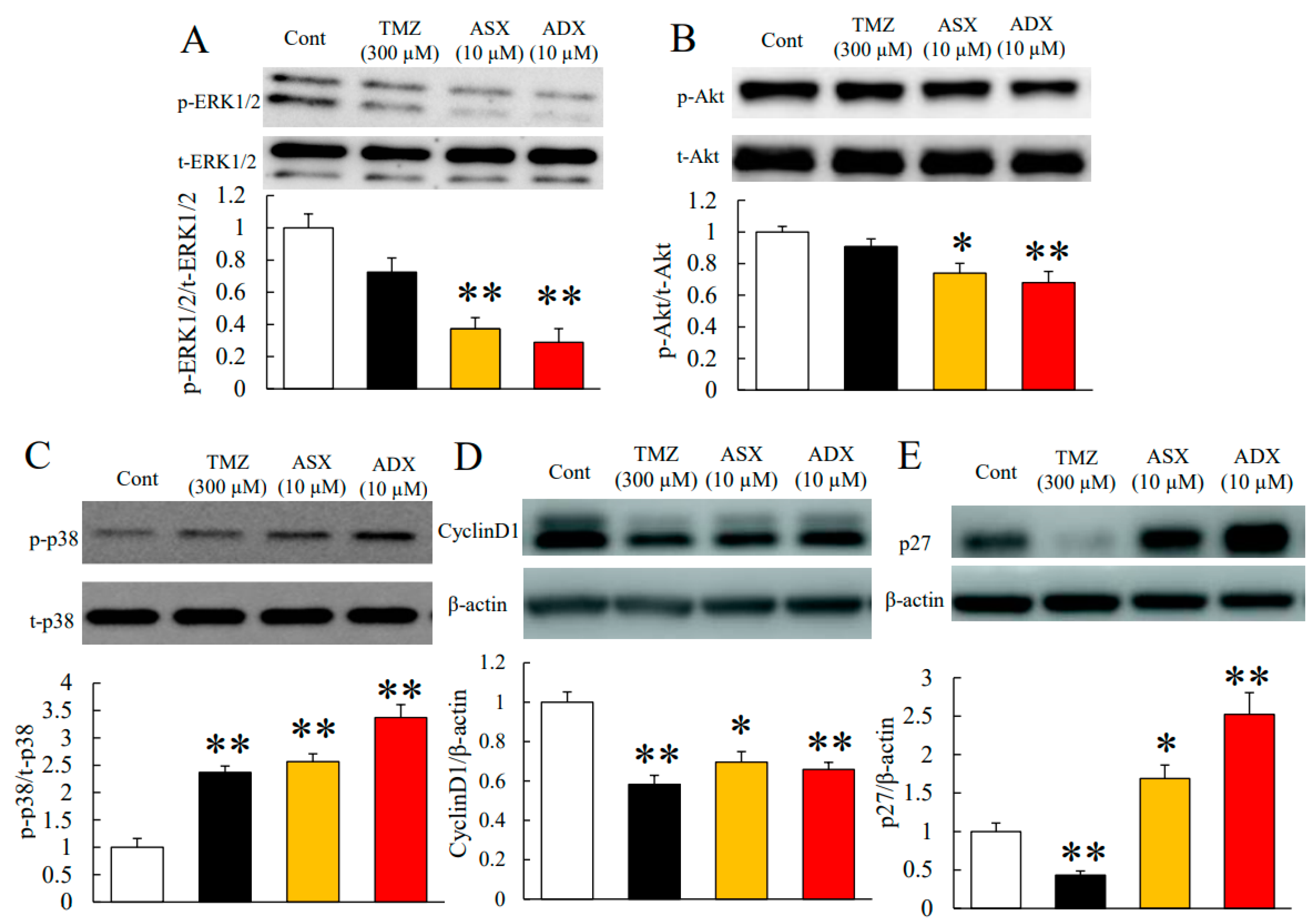 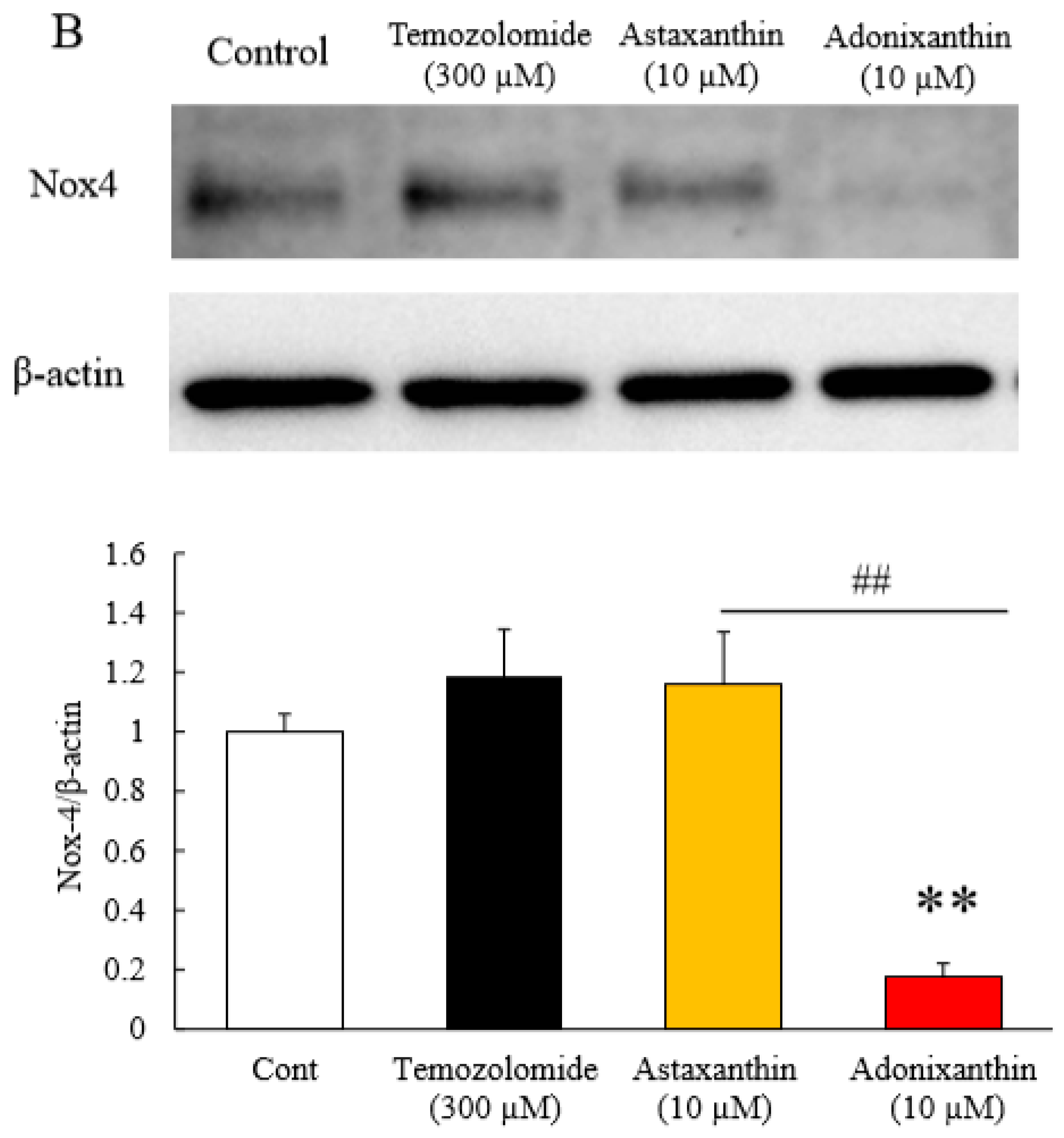 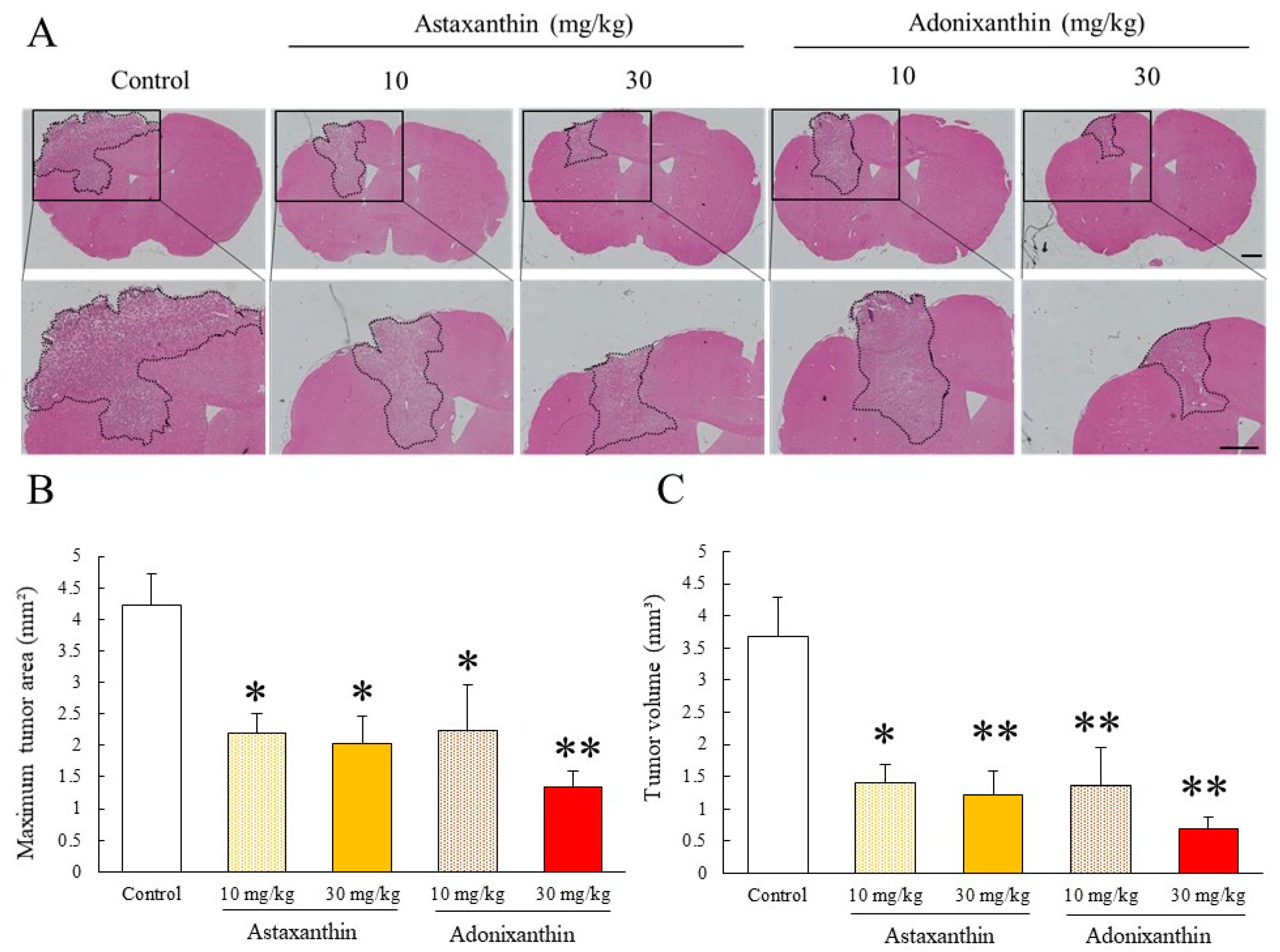