Mussel Shell-Derived Macroporous 3D Scaffold: Characterization and Optimization Study of a Bioceramic from the Circular Economy

Insulin-like growth foctor-1 (IGF-1) is a 70-amino acid polypeptide hormone similar to insulin in molecular structure and is present in both humans and rodents [1]. Despite being involved in the mediation of normal physiological functions such as tissue growth and development [2], lipid metabolism [3], anti-inflammatory responses [4], and anabolic functions [5], IGF-1 is also crucial for osteoblast differentiation, bone remodeling, and growth performance [6]. Although IGF-1 is mainly produced by the liver, all other tissues also produce a considerable amount of IGF-1 [7]. IGF-1 is fragile and unstable during systemic circulation; hence, it normally binds with specific IGF-binding proteins (IGFBPs) to achieve a prolonged half-life, thus enabling its transport from the blood circulation to the distinct tissues [8]. Many studies have demonstrated that IGF-1 strongly binds to IGFBPs with higher specificity and affinity than to IGF-1 receptor (IGF-1R), thereby weakening the ligation of IGF-1 to IGF-1R [9,10]. In this regard, IGFBP-specific proteases such as pregnancy-associated plasma protein A (PAPP-A) and PAPP-A2 cleave IGFBPs to liberate IGF-1 from IGF-1/IGFBP complex, leading to increased binding affinity of IGF-1 to IGF-1R [11].
IGF-1R differs from other receptor families due to the existence of disulfide-linked dimers (two α and two β subunits) and the requirement of domain rearrangement to initiate intracellular signaling [12]. The ligation of IGF-1 to the α-subunit of IGF-1R induces conformational changes in the receptor, leading to autophosphorylation of the β-subunit in IGF-1R and activation of the downstream cellular signaling pathways [13]. Under normal physiological conditions, stimulation of the IGF-1R signaling pathway inactivates glycogen synthase kinase-3β (GSK-3β) through phosphorylation at Ser9 and thus is mediated by activation of the phosphoinositide 3-kinase (PI3K) and protein kinase B (also known as Akt) signaling pathways [14]. This consequently releases β-catenin from the destructive complex and thereby enables β-catenin-related transcriptional activation for osteogenesis [15]. Additionally, Kugimiya et al. demonstrated that heterozygous GSK-3β-deficient mice showed enhanced bone formation mediated by the upregulation of runt-related transcription factor 2 (RUNX2) transcriptional activities [16]. Therefore, IGF-1 may activate β-catenin and RUNX2 by inhibiting GSK-3β and enhance osteogenesis-mediated growth performance.
In our previous study, the composition of fermented oyster (Crassostrea gigas) extract (FO) was characterized, and we reported that FO induced osteoblast differentiation and bone formation by activating the β-catenin signaling pathway [17]. Additionally, our research team demonstrated that FO prevented ovariectomy-induced bone loss by inhibiting osteoclastogenesis [18,19]. However, it is unclear whether FO positively regulated growth performance concomitantly with bone formation. In the current study, we aimed to elucidate the mechanism through which FO potentially stimulates osteogenesis-mediated growth performance. Our data revealed that FO-mediated bone formation and growth performance were regulated by activation of the IGF-1R signaling pathway and concomitant expression of autocrine IGF-1, which induced GSK-3β phosphorylation at Ser9, activated RUNX2, and ultimately resulted in osteogenesis and improved growth performance.

2.3. FO Promotes the Release of IGF-1 in MC3T3-E1 Cells by Transactivating Its Gene Expression

Next, we confirmed whether the IGF-1R signaling pathway directly induced GSK-3β phosphorylation at Ser9 in FO-induced calcium deposition. Figure 6A shows that FO and GP significantly increased the expression of IGF-1Rα/β in MC3T3-E1 cells, and the transient knockdown of IGF-1Rα/β using siRNA significantly downregulated its expression. Consistent with the pharmacological inhibition of IGF-1R using PPP, siIGF-1Rα/β caused a significant decrease in alizarin red-stained calcium deposition in MC3T3-E1 cells under FO- and GP-treated conditions (Figure 6B). We further investigated whether GSK-3β phosphorylation at Ser9 was reduced under siIGF-1Rα/β-transfected conditions. Transfection with siIGF-1Rα/β resulted in the downregulation of phosphorylated GSK-3 at Ser9 in the presence of FO (relative density compared to GP-treated cells: 1.17 ± 0.02 and 0.26 ± 0.01 in the FO- and the FO + siIGF-1Rα/β-treated MC3T3-E1 cells and 1.00 ± 0.09 and 0.45 ± 0.08 in the GP- and the GP + siIGF-1Rα/β-treated MC3T3-E1 cells, respectively). Altogether, these results confirm that FO triggered IGF-1 expression and its binding to IGF-1R, which inhibited GSK-3β, stimulated RUNX2, and caused bone formation.

MC3T3-E1 cells were cultured in 24-well plate at a density of 2000 cells/cm2 overnight and then treated with FO (0–100 µg/mL) or GP (2 mM) for 5 days. Total RNA was extracted using an easy-BLUETM RNA extraction kit (iNtRON Biotechnology, Seongnam, Gyeonggi-do, Republic of Korea), according to the manufacturer’s instructions. Genes of interest were reverse-transcribed and amplified using One-Step RT-PCR Premix (iNtRON Biotechnology). The specific primers for mIGF-1 (sc-37194-PR) and mIGF-1Rα/β (sc-35638-PR) were purchased from Santa Cruz Biotechnology (Santa Cruz, CA). PCR conditions were provided according to the manufacturer protocol. Mouse glyceraldehyde 3-phosphate dehydrogenase (GAPDH) (F: 5′-CACCACCCTGTTGCTGTAGC-3′ and R: 5′-ACCACAGTCCATGCCATCAC-3′) was used as an internal control to evaluate the relative expression of mIGF-1 and mIGF-1Rα/β.

MC3T3-E1 cells were cultured in 24-well plate at a density of 2000 cells/cm2 overnight. Then, the cells were pretreated with the indicated concentrations of FO (0–100 µg/mL) or GP (2 mM) for 72 h, and cell free supernatants were collected. The supernatants were assayed for the concentration of IGF-1 using an IGF-1 ELISA kit (K033225, KOMA BIOTECH) according to the manufacturer’s protocol.

MC3T3-E1 cells (2000 cells/cm2) were seeded on 3% gelatin-coated coverslips and allowed to attach in cover slips. Then, FO (0–100 µg/mL) was treated in the presence or absence of 30 µM DOI. After 3 days, the cells were fixed with 4% paraformaldehyde for 10 min at 37 °C and washed three times with ice-cold phosphate buffered saline (PBS). The fixed cells were permeabilized with 0.1% Triton X-100 for 10 min at room temperature. After washing with ice-cold PBS containing 0.1% tween-20 (PBST) for 5 min, the cells were blocked with 10% donkey serum and incubated with RUNX2 antibody (1:100 in 10% donkey serum) overnight at 4 °C. The cells were stained with Alexa Fluor® 488 secondary antibody for 2 h and counterstained with a nuclear staining die, DAPI (300 nM), for 10 min. After being washed three times with ice-cold PBST, the coverslips were mounted onto glass slides with Dako faramount aqueous mounting media and fluorescence images were captured by CELENA® S digital imaging system (Logos Biosystems, Anyang, Gyeonggi-do, Republic of Korea).

MC3T3-E1 cells were transfected with silencing RNA for IGF-1Rα/β (siIGF-1Rα/β (sc-35638), Santa Cruz). Briefly, the cells were seeded at a density of 2000 cells/cm2 in 6-well cell culture plates overnight and replaced with FBS-free media. Serum free growth medium was added to 10 nM siIGF-1Rα/β with the transfection reagent, G-Fectin (Genolution Pharmaceuticals Inc., Seoul, Republic of Korea), and the entire mixture was incubated for 15 min at room temperature and gently added to the cells. The cells were kept for 48 h to facilitate the transfection before being subjected to the subsequent treatments.

MC3T3-E1 cells were seeded in a 24-well plate at a density 2000 cells/cm2 and then treated with the indicated concentrations of FO (0–100 µg/mL). In vitro calcium deposition was measured by staining with alizarin red. Briefly, MC3T3-E1 cells were washed with PBS and fixed with 4% paraformaldehyde for 30 min at 37 °C. Then, the cells were washed with PBS and stained with 2% alizarin red solution for 30 min. Images of each well were captured with a phase contrast microscope (Ezscope i900PH, Macrotech, Goyang, Gyeonggi-do, Republic of Korea).

4.9. Maintenance of Zebrafish Embryo and Larvae

Zebrafish (AB strain) were maintained and raised according to standard guidelines of the Animal Care and Use Committee of Jeju National University (Jeju, Jeju Special Self-Governing Province, Republic of Korea; approval no.: 2020-0029). The adult zebrafish were raised at 28.5 °C with a 14:10-h light:dark cycle. Fertilized embryos after natural spawning were collected and cultured at 28.5 °C in E3 embryo media containing 2 mg/L methylene blue.

In order to monitor bone formation in zebrafish larvae, calcein green fluorescent marker was used. To analyze vertebrae formation, zebrafish larvae at 3 dpf were treated with 0–100 µg/mL FO and media were replaced at 6 dpf with FO. At 9 dpf, the larvae were immersed in 0.05% calcein solution for 10 min and then rinsed in fresh water three times for 10 min. The larvae were anesthetized in 0.04% tricaine methanesulfonate solution and mounted on depression slides using 2% methylcellulose. Fluorescence images were captured by a CELENA® S digital imaging system (Logos Biosystems, Anyang, Gyeonggi-do, Republic of Korea).

Zebrafish larvae at 3 dpf were treated with 0–100 µg/mL FO or 4 mM GP, and total RNA was extracted at 9 and 12 dpf using an easy-BLUETM total RNA extraction kit. The RNA was reverse-transcribed by an MMLV reverse transcriptase kit (BIONEER, Daejeon, Republic of Korea) and synthetic cDNA was amplified using following primers (Table 1).

All Western blots, RT-PCR bands, and zebrafish vertebrae were quantified by ImageJ 1.50i (National Institute of Health, Manassas, VA, USA) and then statistically analyzed by Sigma plot 12.0. All data represent the mean of at least three independent experiments and significant differences between groups were determined using an unpaired one-way ANOVA test with Bonferroni correction. Statistical significance was set at * p < 0.05, ** p < 0.01, and *** p < 0.001.

This study was a part of the project titled “Development of functional food products with natural materials derived from marine resources”, funded by the Ministry of Oceans and Fisheries, Korea (no.: 20170285).

We are thankful to Marine Bioprocess Co. (Busan, Republic of Korea) and Nakdonggang National Institute of Biological Resources (Sangju, Gyeongsangbuk-do, Republic of Korea), which supplied FO and AB strain of zebrafish, respectively. 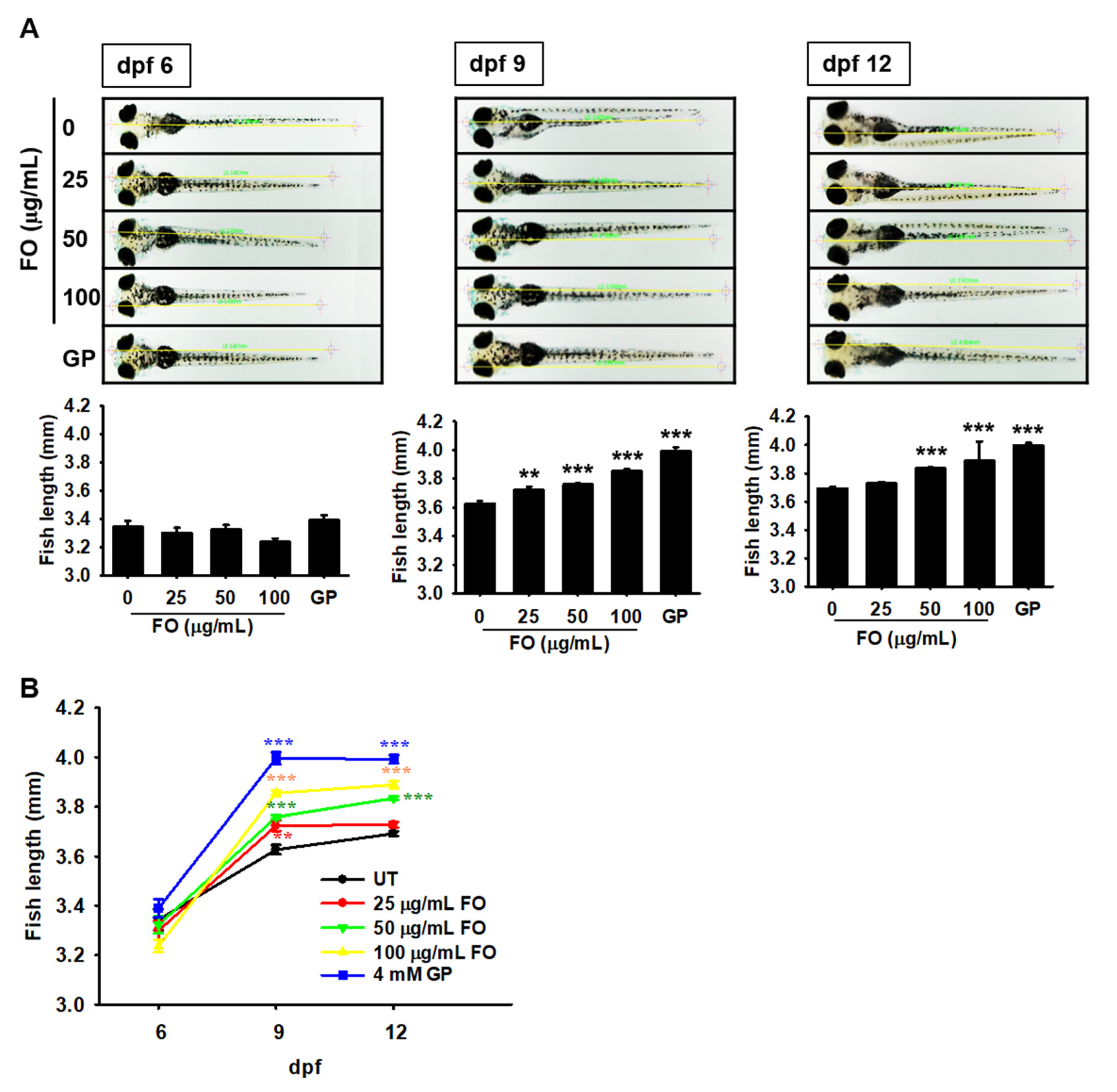 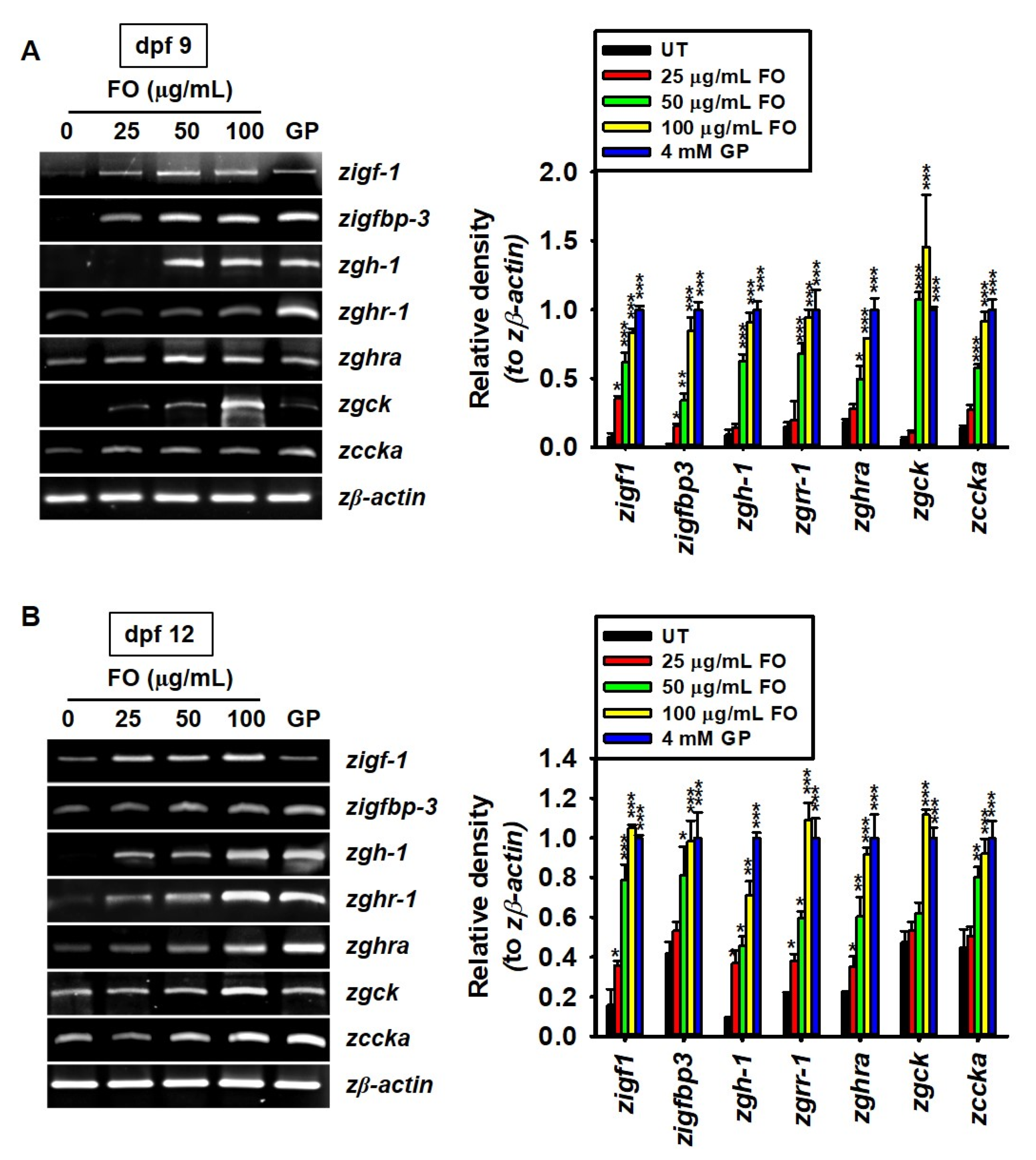 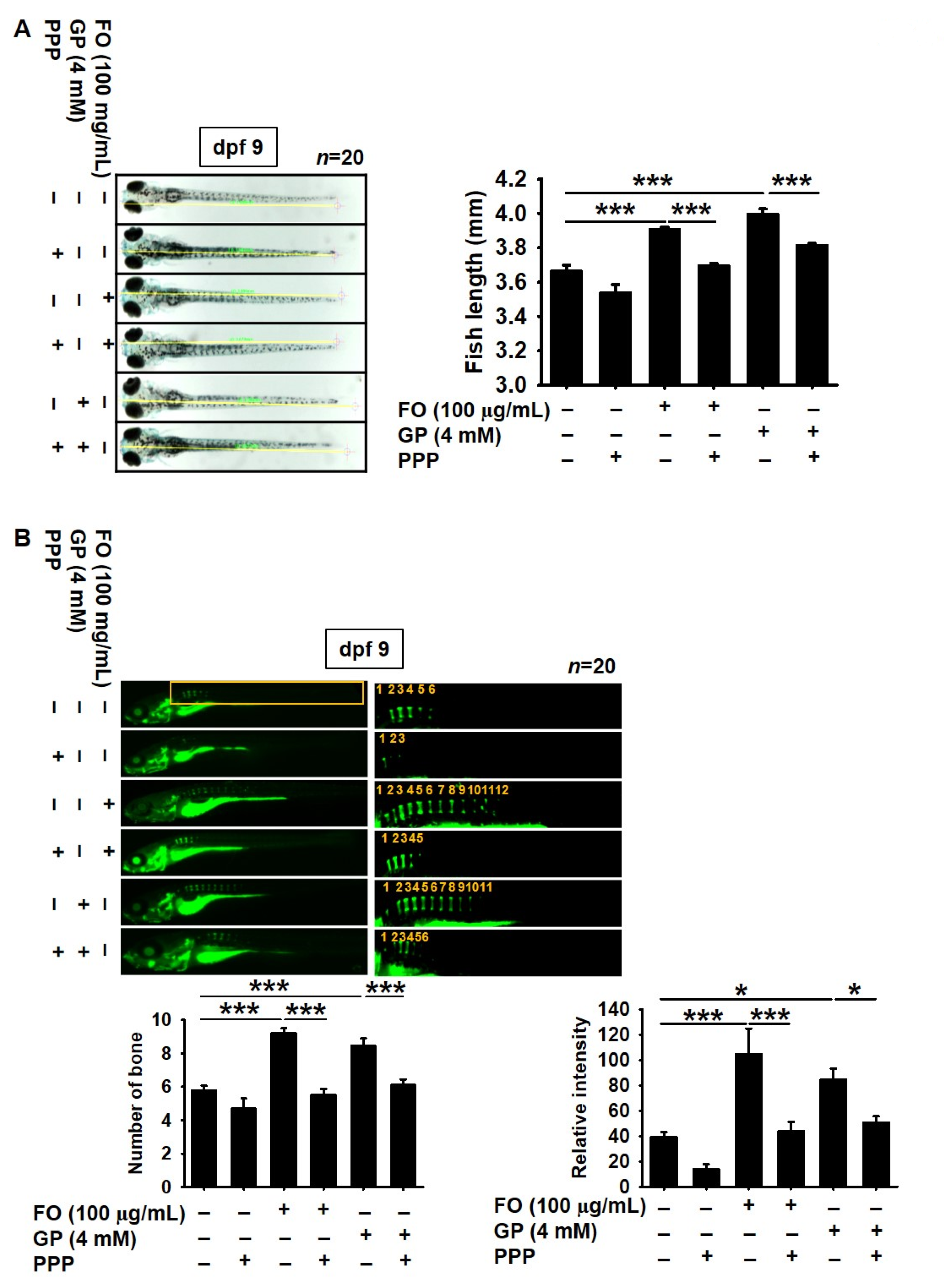