Therapeutic Potential of (−)-Agelamide D, a Diterpene Alkaloid from the Marine Sponge Agelas sp., as a Natural Radiosensitizer in Hepatocellular Carcinoma Models
Previous Article in Journal

Feature-based molecular networking was used to re-examine the secondary metabolites in extracts of a very well studied marine sponge, Stylissa caribica, known to contain a large array of cyclic peptides and brominated alkaloids. The analysis revealed the presence of 13 cyclic peptides in the sponge that had never been detected in previous work and appeared to be new compounds. The most abundant one was isolated and shown to be a new proline-rich cyclic heptapetide that was called stylissamide L (1). Structure of compound 1, including the cis/trans geometry of the three proline residues, was determined by extensive NMR studies; the l configuration of the seven amino acid residues was determined using Marfey’s method. Stylissamide L was tested for activity as a cell growth inhibitor and cell migration inhibitor on two cancer cell lines but, unlike other members of the stylissamide family, it showed no significant activity. This approach showed that even a thoroughly studied species such as S. caribica may contain new chemistry that can be revealed if studied with the right tools. View Full-Text
Keywords: cyclic peptides; dereplication; feature-based molecular networking; marine sponges; metabolomics; molecular networking; proline-rich peptides cyclic peptides; dereplication; feature-based molecular networking; marine sponges; metabolomics; molecular networking; proline-rich peptides
►▼ Show Figures 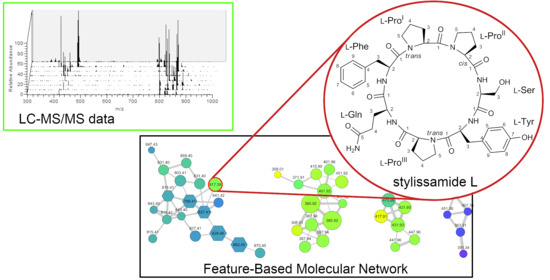