Marine Bioactive Peptides—An Overview of Generation, Structure and Application with a Focus on Food Sources

The biggest obstacles in the application of marine peptides are two-fold, as in the case of non-marine plant and animal-derived bioactive peptides: elucidating correlation between the peptide structure and its effect and demonstrating its stability in vivo. The structures of marine bioactive peptides are highly variable and complex and dependent on the sources from which they are isolated. They can be cyclical, in the form of depsipeptides, and often contain secondary structures. Because of steric factors, marine-derived peptides can be resistant to proteolysis by gastrointestinal proteases, which presents an advantage over other peptide sources. Because of heterogeneity, amino acid sequences as well as preferred mechanisms of peptides showing specific bioactivities differ compared to their animal-derived counterparts. This review offers insights on the extreme diversity of bioactivities, effects, and structural features, analyzing 253 peptides, mainly from marine food sources. Similar to peptides in food of non-marine animal origin, a significant percentage (52.7%) of the examined sequences contain one or more proline residues, implying that proline might play a significant role in the stability of bioactive peptides. Additional problems with analyzing marine-derived bioactive peptides include their accessibility, extraction, and purification; this review considers the challenges and proposes possible solutions. View Full-Text
Keywords: bioactive peptides; marine; secondary structure; proline; mechanism of activity; marine waste bioactive peptides; marine; secondary structure; proline; mechanism of activity; marine waste
►▼ Show Figures 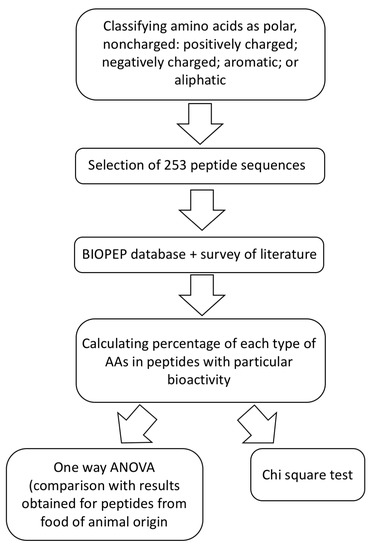