Progress of Bromophenols in Marine Algae from 2011 to 2020: Structure, Bioactivities, and Applications
Previous Article in Special Issue

Tube anemones, or cerianthids, are a phylogenetically informative group of cnidarians with complex life histories, including a pelagic larval stage and tube-dwelling adult stage, both known to utilize venom in stinging-cell rich tentacles. Cnidarians are an entirely venomous group that utilize their proteinaceous-dominated toxins to capture prey and defend against predators, in addition to several other ecological functions, including intraspecific interactions. At present there are no studies describing the venom for any species within cerianthids. Given their unique development, ecology, and distinct phylogenetic-placement within Cnidaria, our objective is to evaluate the venom-like gene diversity of four species of cerianthids from newly collected transcriptomic data. We identified 525 venom-like genes between all four species. The venom-gene profile for each species was dominated by enzymatic protein and peptide families, which is consistent with previous findings in other cnidarian venoms. However, we found few toxins that are typical of sea anemones and corals, and furthermore, three of the four species express toxin-like genes closely related to potent pore-forming toxins in box jellyfish. Our study is the first to provide a survey of the putative venom composition of cerianthids and contributes to our general understanding of the diversity of cnidarian toxins. View Full-Text
Keywords: Anthozoa; tube anemone; transcriptome; toxins; venom-like; Pachycerianthus cf. maua; Pachycerianthus borealis; Isarachnanthus nocturnus; Ceriantheomorphe brasiliensis Anthozoa; tube anemone; transcriptome; toxins; venom-like; Pachycerianthus cf. maua; Pachycerianthus borealis; Isarachnanthus nocturnus; Ceriantheomorphe brasiliensis
►▼ Show Figures 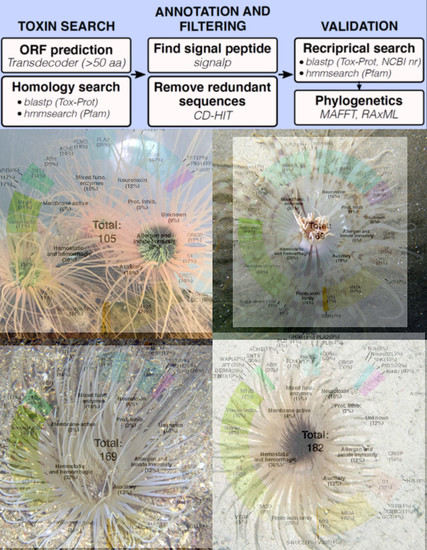