The fungal genus Pyrenochaetopsis is commonly found in soil, terrestrial, and marine environments, however, has received little attention as a source of bioactive secondary metabolites so far. In a recent work, we reported the isolation and characterization of three new anticancer decalinoyltetramic acid derivatives, pyrenosetins A–C, from the Baltic Fucus vesiculosus-derived endophytic fungus Pyrenochaetopsis sp. FVE-001. Herein we report a new pentacyclic decalinoylspirotetramic acid derivative, pyrenosetin D (1), along with two known decalin derivatives wakodecalines A (2) and B (3) from another endophytic strain Pyrenochaetopsis FVE-087 isolated from the same seaweed and showed anticancer activity in initial screenings. The chemical structures of the purified compounds were elucidated by comprehensive analysis of HR-ESIMS, FT-IR, [α]D, 1D and 2D NMR data coupled with DFT calculations of NMR parameters and optical rotation. Compounds 1–3 were evaluated for their anticancer and toxic potentials against the human malignant melanoma cell line (A-375) and the non-cancerous keratinocyte cell line (HaCaT). Pyrenosetin D (1) showed toxicity towards both A-375 and HaCaT cells with IC50 values of 77.5 and 39.3 μM, respectively, while 2 and 3 were inactive. This is the third chemical study performed on the fungal genus Pyrenochaetopsis and the first report of a pentacyclic decalin ring system from the fungal genus Pyrenochaetopsis. View Full-Text
Keywords: Pyrenochaetopsis; pyrenosetin; marine fungus; decalinoyltetramic acid; Fucus vesiculosus; anticancer Pyrenochaetopsis; pyrenosetin; marine fungus; decalinoyltetramic acid; Fucus vesiculosus; anticancer
►▼ Show Figures 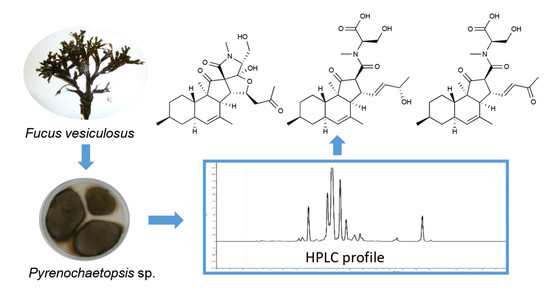