Monogalactosyldiacylglycerol and Sulfolipid Synthesis in Microalgae
Previous Article in Journal

RES-701-3 and RES-701-4 are two class II lasso peptides originally identified in the fermentation broth of Streptomyces sp. RE-896, which have been described as selective endothelin type B receptor antagonists. These two lasso peptides only differ in the identity of the C-terminal residue (tryptophan in RES-701-3, 7-hydroxy-tryptophan in RES-701-4), thus raising an intriguing question about the mechanism behind the modification of the tryptophan residue. In this study, we describe the identification of their biosynthetic gene cluster through the genome mining of the marine actinomycete Streptomyces caniferus CA-271066, its cloning and heterologous expression, and show that the seven open reading frames (ORFs) encoded within the gene cluster are sufficient for the biosynthesis of both lasso peptides. We propose that ResE, a protein lacking known putatively conserved domains, is likely to play a key role in the post-translational modification of the C-terminal tryptophan of RES-701-3 that affords RES-701-4. A BLASTP search with the ResE amino acid sequence shows the presence of homologues of this protein in the genomes of eight other Streptomyces strains, which also harbour the genes encoding the RES-701-3, -4 precursor peptide, split-B proteins and ATP-dependent lactam synthetase required for the biosynthesis of these compounds. View Full-Text
Keywords: lasso peptide; RES-701-3; RES-701-4; genome mining; biosynthetic gene cluster; Streptomyces caniferus lasso peptide; RES-701-3; RES-701-4; genome mining; biosynthetic gene cluster; Streptomyces caniferus
►▼ Show Figures 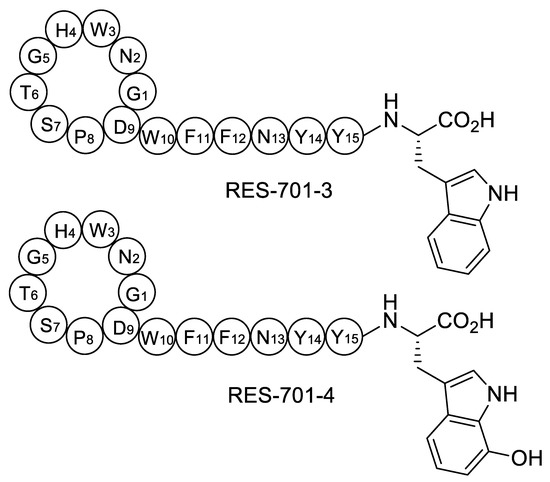