Epidemiology and Toxicology of Ciguatera Poisoning in the Colombian Caribbean

Ricky B. Nellas
1 and

Marine cone snails belonging to the Conidae family make use of neuroactive peptides in their venom to capture prey. Here we report the proteome profile of the venom duct of Conus eburneus, a cone snail belonging to the Tesseliconus clade. Through tandem mass spectrometry and database searching against the C. eburneus transcriptome and the ConoServer database, we identified 24 unique conopeptide sequences in the venom duct. The majority of these peptides belong to the T and M gene superfamilies and are disulfide-bonded, with cysteine frameworks V, XIV, VI/VII, and III being the most abundant. All seven of the Cys-free peptides are conomarphin variants belonging to the M superfamily that eluted out as dominant peaks in the chromatogram. These conomarphins vary not only in amino acid residues in select positions along the backbone but also have one or more post-translational modifications (PTMs) such as proline hydroxylation, C-term amidation, and γ-carboxylation of glutamic acid. Using molecular dynamics simulations, the conomarphin variants were predicted to predominantly have hairpin-like or elongated structures in acidic pH. These two structures were found to have significant differences in electrostatic properties and the inclusion of PTMs seems to complement this disparity. The presence of polar PTMs (hydroxyproline and γ-carboxyglutamic acid) also appear to stabilize hydrogen bond networks in these conformations. Furthermore, these predicted structures are pH sensitive, becoming more spherical and compact at higher pH. The subtle conformational variations observed here might play an important role in the selection and binding of the peptides to their molecular targets. View Full-Text
Keywords: conopeptide; proteomics; 3D structure; conomarphins conopeptide; proteomics; 3D structure; conomarphins
►▼ Show Figures 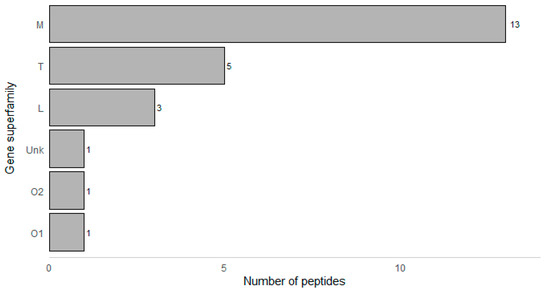