Tuberculosis is the leading cause of death due to infectious disease worldwide. There is an urgent need for more effective compounds against this pathogen to control the disease. Investigation of the anti-mycobacterial activity of a deep-water sponge of the genus Plakina revealed the presence of a new steroidal alkaloid of the plakinamine class, which we have given the common name plakinamine P. Its structure is most similar to plakinamine L, which also has an acyclic side chain. Careful dissection of the nuclear magnetic resonance data, collected in multiple solvents, suggests that the dimethyl amino group at the 3 position is in an equatorial rather than axial position unlike previously reported plakinamines. Plakinamine P was bactericidal against M. tuberculosis, and exhibited moderate activity against other mycobacterial pathogens, such as M. abscessus and M. avium. Furthermore, it had low toxicity against J774 macrophages, yielding a selectivity index (SI, or IC50/MIC) of 8.4. In conclusion, this work provides a promising scaffold to the tuberculosis drug discovery pipeline. Future work to determine the molecular target of this compound may reveal a pathway essential for M. tuberculosis survival during infection. View Full-Text
Keywords: marine compounds; tuberculosis; drug discovery marine compounds; tuberculosis; drug discovery
►▼ Show Figures 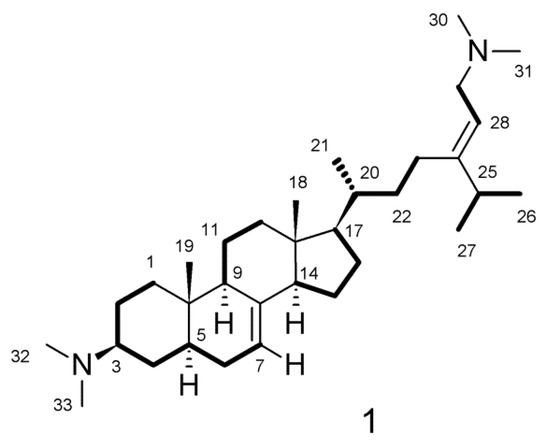