The solar salterns located in the Odiel marshlands, in southwest Spain, are an excellent example of a hypersaline environment inhabited by microbial populations specialized in thriving under conditions of high salinity, which remains poorly explored. Traditional culture-dependent taxonomic studies have usually under-estimated the biodiversity in saline environments due to the difficulties that many of these species have to grow at laboratory conditions. Here we compare two molecular methods to profile the microbial population present in the Odiel saltern hypersaline water ponds (33% salinity). On the one hand, the construction and characterization of two clone PCR amplified-16S rRNA libraries, and on the other, a high throughput 16S rRNA sequencing approach based on the Illumina MiSeq platform. The results reveal that both methods are comparable for the estimation of major genera, although massive sequencing provides more information about the less abundant ones. The obtained data indicate that Salinibacter ruber is the most abundant genus, followed by the archaea genera, Halorubrum and Haloquadratum. However, more than 100 additional species can be detected by Next Generation Sequencing (NGS). In addition, a preliminary study to test the biotechnological applications of this microbial population, based on its ability to produce and excrete haloenzymes, is shown. View Full-Text
Keywords: halo-extremophyles; archaea; 16S rRNA metagenomics; haloenzymes; Odiel marshlands halo-extremophyles; archaea; 16S rRNA metagenomics; haloenzymes; Odiel marshlands
►▼ Show Figures 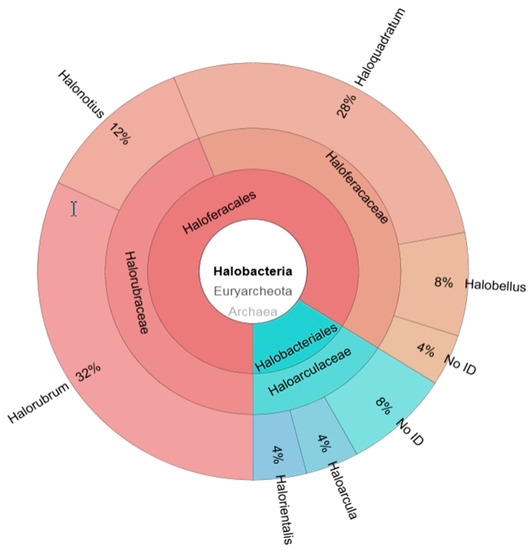