Species in the genus Gambierdiscus produce ciguatoxins (CTXs) and/or maitotoxins (MTXs), which may cause ciguatera fish poisoning (CFP) in humans if contaminated fish are consumed. Species of Gambierdiscus have previously been isolated from macroalgae at Rangitahua (Raoul Island and North Meyer Islands, northern Kermadec Islands), and the opportunity was taken to sample for Gambierdiscus at the more southerly Macauley Island during an expedition in 2016. Gambierdiscus cells were isolated, cultured, and DNA extracted and sequenced to determine the species present. Bulk cultures were tested for CTXs and MTXs by liquid chromatography-mass spectrometry (LC-MS/MS). The species isolated were G. australes, which produced MTX-1 (ranging from 3 to 36 pg/cell), and G. polynesiensis, which produced neither MTX-1 nor, unusually, any known CTXs. Isolates of both species produced putative MTX-3. The risk of fish, particularly herbivorous fish, causing CFP in the Zealandia and Kermadec Islands region is real, although in mainland New Zealand the risk is currently low. Both Gambierdiscus and Fukuyoa have been recorded in the sub-tropical northern region of New Zealand, and so the risk may increase with warming seas and shift in the distribution of Gambierdiscus species. View Full-Text
Keywords: Gambierdiscus; ciguatera fish poisoning; ciguatoxins; maitotoxin; Kermadec Islands, New Zealand Gambierdiscus; ciguatera fish poisoning; ciguatoxins; maitotoxin; Kermadec Islands, New Zealand
►▼ Show Figures 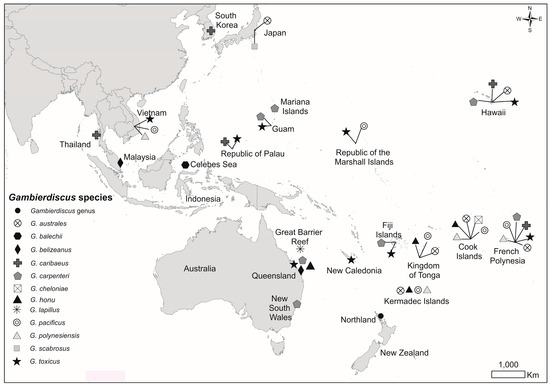