Macroalgae have been seen as an alternative source of molecules with promising bioactivities to use in the prevention and treatment of current lifestyle diseases. In this vein, the lipophilic fraction of short-term (three weeks) cultivated Bifurcaria bifurcata was characterized in detail by gas chromatography–mass spectrometry (GC-MS). B. bifurcata dichloromethane extract was composed mainly by diterpenes (1892.78 ± 133.97 mg kg−1 dry weight (DW)), followed by fatty acids, both saturated (550.35 ± 15.67 mg kg−1 DW) and unsaturated (397.06 ± 18.44 mg kg−1 DW). Considerable amounts of sterols, namely fucosterol (317.68 ± 26.11 mg kg−1 DW) were also found. In vitro tests demonstrated that the B. bifurcata lipophilic extract show antioxidant, anti-inflammatory and antibacterial activities (against both Gram-positive and Gram-negative bacteria), using low extract concentrations (in the order of µg mL−1). Enhancement of antibiotic activity of drug families of major clinical importance was observed by the use of B. bifurcata extract. This enhancement of antibiotic activity depends on the microbial strain and on the antibiotic. This work represents the first detailed phytochemical study of the lipophilic extract of B. bifurcata and is, therefore, an important contribution for the valorization of B. bifurcata macroalgae, with promising applications in functional foods, nutraceutical, cosmetic and biomedical fields. View Full-Text
Keywords: Bifurcaria bifurcata; macroalgae; lipids; lipophilic compounds; diterpenes; antioxidant activity; anti-inflammatory activity; antibacterial activity Bifurcaria bifurcata; macroalgae; lipids; lipophilic compounds; diterpenes; antioxidant activity; anti-inflammatory activity; antibacterial activity
►▼ Show Figures 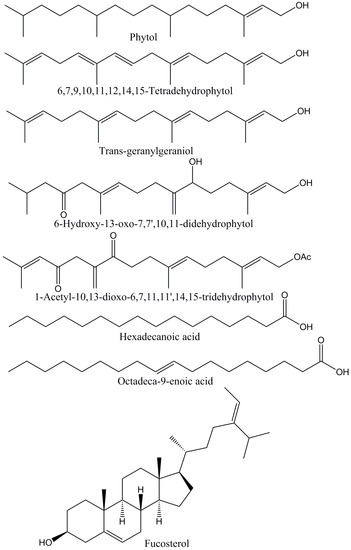