A new napyradiomycin, MDN-0170 (1), was isolated from the culture broth of the marine-derived actinomycete strain CA-271078, together with three known related compounds identified as 4-dehydro-4a-dechloronapyradiomycin A1 (2), napyradiomycin A1 (3) and 3-chloro-6,8-dihydroxy-8-α-lapachone (4). The structure of the new compound was determined using a combination of spectroscopic techniques, including 1D and 2D NMR and electrospray-time of flight mass spectrometry (ESI-TOF MS). The relative configuration of compound 1, which contains two independent stereoclusters, has been established by molecular modelling in combination with nOe and coupling constant analyses. Biosynthetic arguments also allowed us to propose its absolute stereochemistry. The antimicrobial properties of the compounds isolated were evaluated against methicillin-resistant Staphylococcus aureus (MRSA), Escherichia coli, Aspergillus fumigatus, and Candida albicans. The potent bioactivity previously reported for compounds 2 and 3 against methicillin-sensitive S. aureus has been extended to methicillin-resistant strains in this report. View Full-Text
Keywords: Streptomyces; napyradiomycin; structural elucidation; antimicrobial activity Streptomyces; napyradiomycin; structural elucidation; antimicrobial activity
►▼ Show Figures 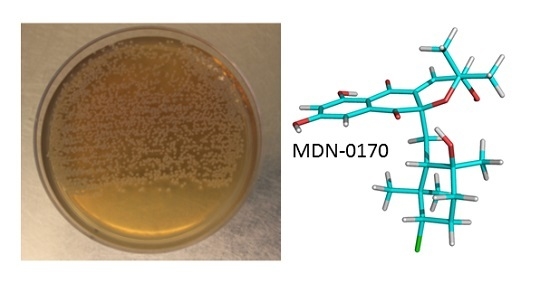