During the summer of 2010, 31 species including fish, echinoderms, gastropods, crustaceans, cephalopods and sponges were sampled in the Bay of Villefranche on the French Mediterranean coast and screened for the presence of PLTX-group toxins using the haemolytic assay. Liquid chromatography tandem mass spectrometry (LC-MS/MS) was used for confirmatory purposes and to determine the toxin profile. The mean toxin concentration in the whole flesh of all sampled marine organisms, determined using the lower- (LB) and upper-bound (UB) approach was 4.3 and 5.1 µg·kg−1, respectively, with less than 1% of the results exceeding the European Food Safety Authority (EFSA) threshold of 30 µg·kg−1and the highest values being reported for sea urchins (107.6 and 108.0 µg·kg−1). Toxins accumulated almost exclusively in the digestive tube of the tested species, with the exception of octopus, in which there were detectable toxin amounts in the remaining tissues (RT). The mean toxin concentration in the RT of the sampled organisms (fishes, echinoderms and cephalopods) was 0.7 and 1.7 µg·kg−1 (LB and UB, respectively), with a maximum value of 19.9 µg·kg−1 for octopus RT. The herbivorous and omnivorous organisms were the most contaminated species, indicating that diet influences the contamination process, and the LC-MS/MS revealed that ovatoxin-a was the only toxin detected. View Full-Text
Keywords: Ostreopsis; palytoxins-group toxins; Mediterranean sea; marine organisms; haemolytic test; LC-MS/MS Ostreopsis; palytoxins-group toxins; Mediterranean sea; marine organisms; haemolytic test; LC-MS/MS
►▼ Show Figures 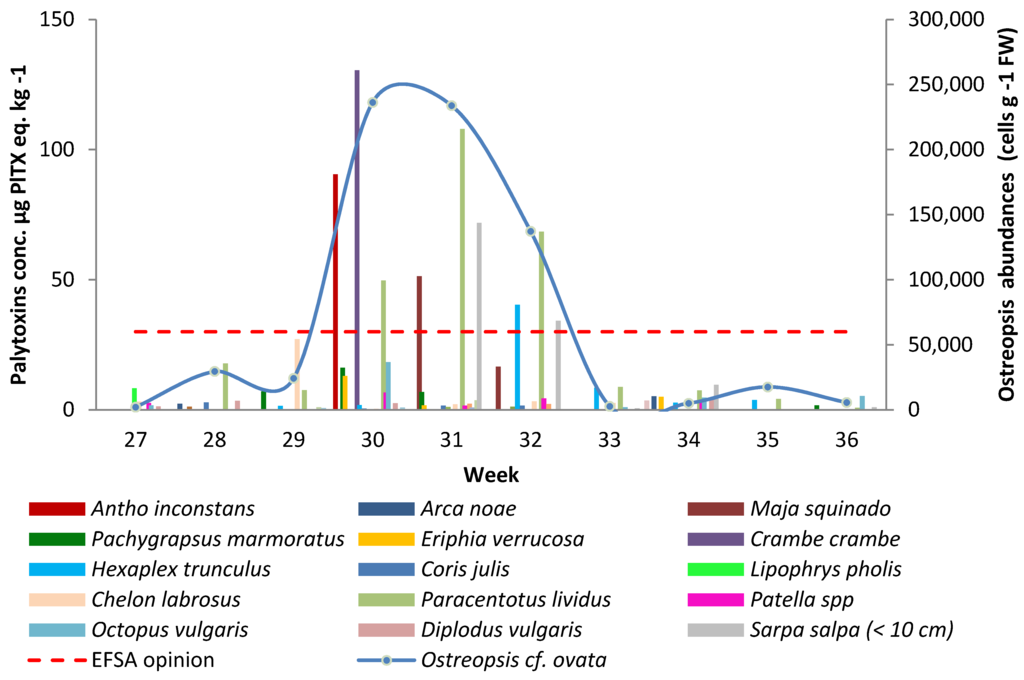