Chitosanases from Family 46 of Glycoside Hydrolases: From Proteins to Phenotypes
Previous Article in Special Issue

Induction of angiogenesis is a potential treatment for chronic ischemia. Low molecular weight fucoidan (LMWF), the sulfated polysaccharide from brown seaweeds, has been shown to promote revascularization in a rat limb ischemia, increasing angiogenesis in vivo. We investigated the potential role of two heparan sulfate (HS) metabolism enzymes, exostosin-2 (EXT2) and heparanase (HPSE), and of two HS-membrane proteoglycans, syndecan-1 and -4 (SDC-1 and SDC-4), in LMWF induced angiogenesis. Our results showed that LMWF increases human vascular endothelial cell (HUVEC) migration and angiogenesis in vitro. We report that the expression and activity of the HS-degrading HPSE was increased after LMWF treatment. The phenotypic tests of LMWF-treated and EXT2- or HPSE-siRNA-transfected cells indicated that EXT2 or HPSE expression significantly affect the proangiogenic potential of LMWF. In addition, LMWF increased SDC-1, but decreased SDC-4 expressions. The effect of LMWF depends on SDC-4 expression. Silencing EXT2 or HPSE leads to an increased expression of SDC-4, providing the evidence that EXT2 and HPSE regulate the SDC-4 expression. Altogether, these data indicate that EXT2, HPSE, and SDC-4 are involved in the proangiogenic effects of LMWF, suggesting that the HS metabolism changes linked to LMWF-induced angiogenesis offer the opportunity for new therapeutic strategies of ischemic diseases. View Full-Text
Keywords: fucoidan; angiogenesis; human endothelial cell; glycosaminoglycan; syndecan; heparanase fucoidan; angiogenesis; human endothelial cell; glycosaminoglycan; syndecan; heparanase
►▼ Show Figures 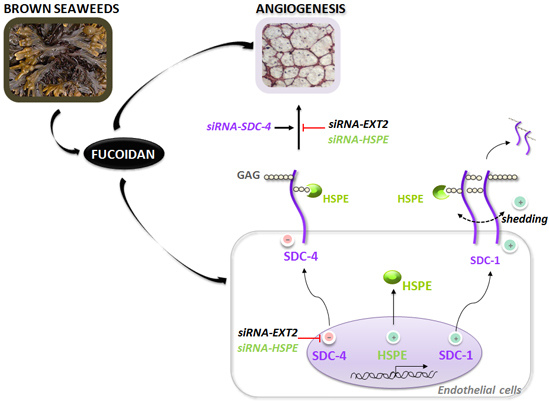