James B. McClintock
2 and

Plocamium cartilagineum is a common red alga on the benthos of Antarctica and can be a dominant understory species along the western Antarctic Peninsula. Algae from this region have been studied chemically, and like “P. cartilagineum” from other worldwide locations where it is common, it is rich in halogenated monoterpenes, some of which have been implicated as feeding deterrents toward sympatric algal predators. Secondary metabolites are highly variable in this alga, both qualitatively and quantitatively, leading us to probe individual plants to track the possible link of variability to genetic or other factors. Using cox1 and rbcL gene sequencing, we find that the Antarctic alga divides into two closely related phylogroups, but not species, each of which is further divided into one of five chemogroups. The chemogroups themselves, defined on the basis of Bray-Curtis similarity profiling of GC/QqQ chromatographic analyses, are largely site specific within a 10 km2 area. Thus, on the limited geographical range of this analysis, P. cartilagineum displays only modest genetic radiation, but its secondary metabolome was found to have experienced more extensive radiation. Such metabogenomic divergence demonstrated on the larger geographical scale of the Antarctic Peninsula, or perhaps even continent-wide, may contribute to the discovery of cryptic speciation. View Full-Text
Keywords: red algae; secondary metabolite variability; Antarctica; metabogenomic analysis red algae; secondary metabolite variability; Antarctica; metabogenomic analysis
►▼ Show Figures 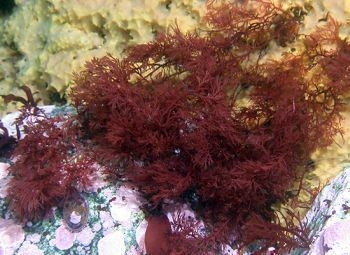