Sources of Secondary Metabolite Variation in Dysidea avara (Porifera: Demospongiae): The Importance of Having Good Neighbors

Genome sequences of the reef-building coral, Acropora digitifera, have been decoded. Acropora inhabits an environment with intense ultraviolet exposure and hosts the photosynthetic endosymbiont, Symbiodinium. Acropora homologs of all four genes necessary for biosynthesis of the photoprotective cyanobacterial compound, shinorine, are present. Among metazoans, these genes are found only in anthozoans. To gain further evolutionary insights into biosynthesis of photoprotective compounds and associated coral proteins, we surveyed the Acropora genome for 18 clustered genes involved in cyanobacterial synthesis of the anti-UV compound, scytonemin, even though it had not previously been detected in corals. We identified candidates for only 6 of the 18 genes, including tyrP, scyA, and scyB. Therefore, it does not appear that Acropora digitifera can synthesize scytonemin independently. On the other hand, molecular phylogenetic analysis showed that one tyrosinase gene is an ortholog of vertebrate tyrosinase genes and that the coral homologs, scyA and scyB, are similar to bacterial metabolic genes, phosphonopyruvate (ppyr) decarboxylase and glutamate dehydrogenase (GDH), respectively. Further genomic searches for ppyr gene-related biosynthetic components indicate that the coral possesses a metabolic pathway similar to the bacterial 2-aminoethylphosphonate (AEP) biosynthetic pathway. The results suggest that de novo synthesis of carbon-phosphorus compounds is performed in corals. View Full-Text
Keywords: coral genome; sunscreen; MAA; scytonemin; tyrosinase; phosphonopyruvate decarboxylase; glutamate dehydrogenase; 2-aminoethylphosphonate (AEP) pathway coral genome; sunscreen; MAA; scytonemin; tyrosinase; phosphonopyruvate decarboxylase; glutamate dehydrogenase; 2-aminoethylphosphonate (AEP) pathway
►▼ Show Figures 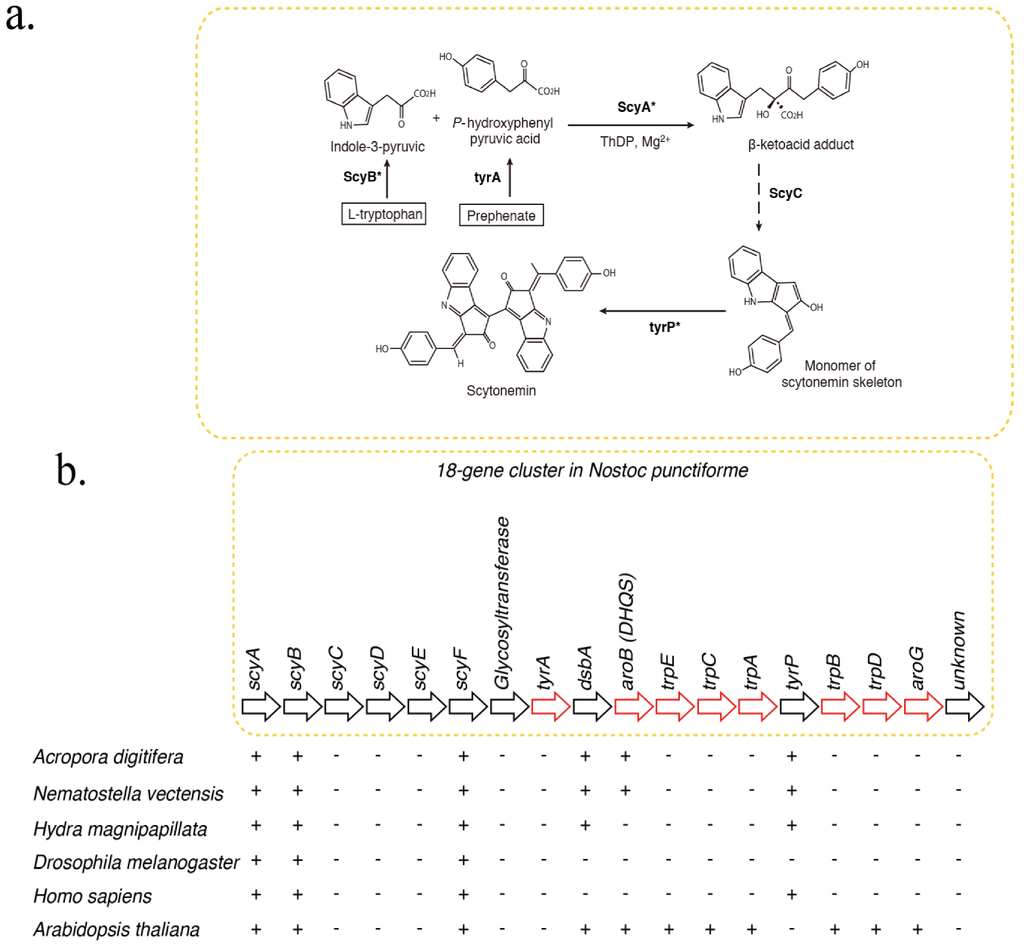