Extensively Drug-Resistant Tuberculosis: A Sign of the Times and an Impetus for Antimicrobial Discovery
Previous Article in Journal

NSAIDs in the Acute Treatment of Migraine: A Review of Clinical and Experimental Data
Previous Article in Special Issue

Linezolid, the first oxazolidinone to be used clinically, is effective in the treatment of infections caused by various Gram-positive pathogens, including multidrug resistant enterococci and methicillin-resistant Staphylococus aureus. It has been used successfully for the treatment of patients with endocarditis and bacteraemia, osteomyelitis, joint infections and tuberculosis and it is often used for treatment of complicated infections when other therapies have failed. Linezolid resistance in Gram-positive cocci has been encountered clinically as well as in vitro, but it is still a rare phenomenon. The resistance to this antibiotic has been, until now, entirely associated with distinct nucleotide substitutions in domain V of the 23S rRNA genes. The number of mutated rRNA genes depends on the dose and duration of linezolid exposure and has been shown to influence the level of linezolid resistance. Mutations in associated ribosomal proteins also affect linezolid activity. A new phenicol and clindamycin resistance phenotype has recently been found to be caused by an RNA methyltransferase designated Cfr. This gene confers resistance to lincosamides, oxazolidinones, streptogramin A, phenicols and pleuromutilins, decrease the susceptibility of S. aureus to tylosin, to josamycin and spiramycin and thus differs from erm rRNA methylase genes. Research into new oxazolidinones with improved characteristics is ongoing. Data reported in patent applications demonstrated that some oxazolidinone derivatives, also with improved characteristics with respect to linezolid, are presently under study: at least three of them are in an advanced phase of development. View Full-Text
Keywords: Staphylococci; Linezolid; mutations; cfr Staphylococci; Linezolid; mutations; cfr
►▼ Show Figures 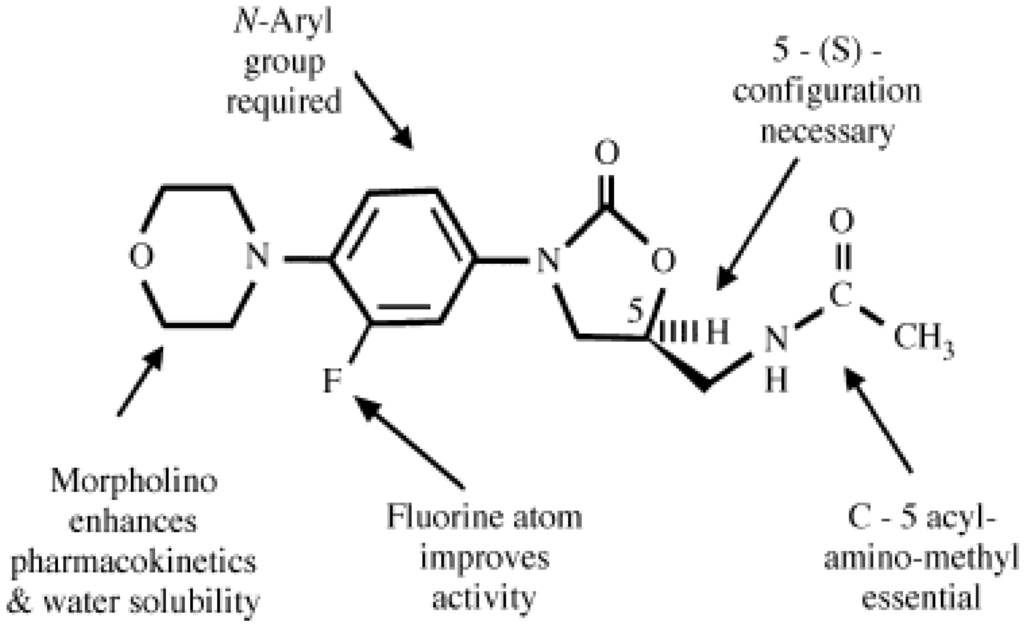