The Mediterranean Diet as a Source of Natural Compounds: Does It Represent a Protective Choice against Cancer?

Small-diameter synthetic vascular grafts are required for surgical bypass grafting when there is a lack of suitable autologous vessels due to different reasons, such as previous operations. Thrombosis is the main cause of failure of small-diameter synthetic vascular grafts when used for this revascularization technique. Therefore, the development of biodegradable vascular grafts capable of providing a localized and sustained antithrombotic drug release mark a major step forward in the fight against cardiovascular diseases, which are the leading cause of death globally. The present paper describes the use of an extrusion-based 3D printing technology for the production of biodegradable antiplatelet tubular grafts for cardiovascular applications. For this purpose, acetylsalicylic acid (ASA) was chosen as a model molecule due to its antiplatelet activity. Poly(caprolactone) and ASA were combined for the fabrication and characterization of ASA-loaded tubular grafts. Moreover, rifampicin (RIF) was added to the formulation containing the higher ASA loading, as a model molecule that can be used to prevent vascular prosthesis infections. The produced tubular grafts were fully characterized through multiple techniques and the last step was to evaluate their drug release, antiplatelet and antimicrobial activity and cytocompatibility. The results suggested that these materials were capable of providing a sustained ASA release for periods of up to 2 weeks. Tubular grafts containing 10% (w/w) of ASA showed lower platelet adhesion onto the surface than the blank and grafts containing 5% (w/w) of ASA. Moreover, tubular grafts scaffolds containing 1% (w/w) of RIF were capable of inhibiting the growth of Staphylococcus aureus. Finally, the evaluation of the cytocompatibility of the scaffold samples revealed that the incorporation of ASA or RIF into the composition did not compromise cell viability and proliferation at short incubation periods (24 h). View Full-Text
Keywords: three-dimensional printing; antiplatelet; acetylsalicylic acid; vascular graft three-dimensional printing; antiplatelet; acetylsalicylic acid; vascular graft
►▼ Show Figures 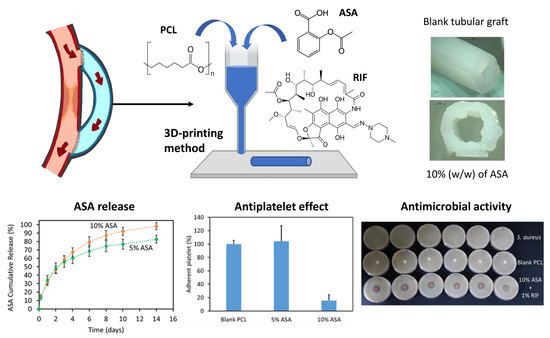