Ocular Co-Delivery of Timolol and Brimonidine from a Self-Assembling Peptide Hydrogel for the Treatment of Glaucoma: In Vitro and Ex Vivo Evaluation
Next Article in Special Issue

Echinacea purpurea (L.) Moench: Chemical Characterization and Bioactivity of Its Extracts and Fractions

Echinacea purpurea (L.) Moench is widely known for its medicinal properties, being one of the most used medicinal plants for its immunostimulant properties. Nevertheless, there is still scarce information on its cytotoxic activity. Thus, this study aims at evaluating the cytotoxicity and antimicrobial activity of several aqueous and organic extracts of the aerial parts of this plant and chemically characterizing the obtained extracts. The analysis was performed by HPLC–DAD–ESI/MS. Fifteen compounds were identified; of these, seven were phenolic acids and eight were flavonoids. Non-polar compounds were evaluated by GC/MS, with a total of sixty-four compounds identified, and the most abundant groups were the sterols, fatty acids and long-chain hydrocarbons. The highest antimicrobial activity was exhibited by the dichloromethane, ethyl acetate, and acetone extracts. Dichloromethane and n-hexane extracts showed the highest cytotoxic activity. Therefore, they were fractionated, and the obtained fractions were also assessed for their cytotoxicity. Notwithstanding, the cytotoxicity of the extracts was superior to that of the obtained fractions, evidencing a possible synergistic effect of different compounds in the whole extracts. View Full-Text
Keywords: Echinacea purpurea (L.) Moench; phenolic compounds; polar compounds; antimicrobial activity; cytotoxicity Echinacea purpurea (L.) Moench; phenolic compounds; polar compounds; antimicrobial activity; cytotoxicity
►▼ Show Figures 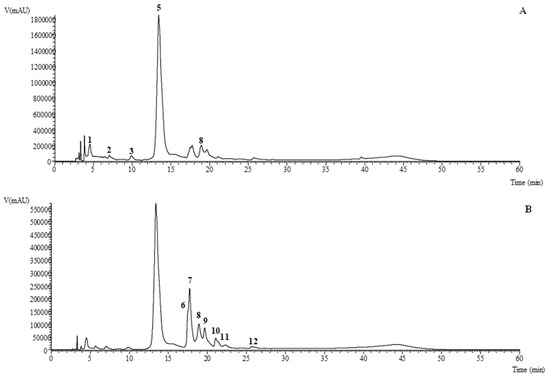