Molecular Mechanisms of the Teratogenic Effects of Thalidomide

Conditional degron-based methods are powerful for studying protein function because a degron-fused protein can be rapidly and efficiently depleted by adding a defined ligand. Auxin-inducible degron (AID) is a popular technology by which a degron-fused protein can be degraded by adding an auxin. However, compared with other technologies such as dTAG and HaloPROTAC, AID is complicated because of its two protein components: OsTIR1 and mAID (degron). To simplify the use of AID in mammalian cells, we constructed bicistronic all-in-one plasmids that express OsTIR1 and a mAID-fused protein using a P2A self-cleavage sequence. To generate a HeLa mutant line for the essential replication factor MCM10, we transfected a CRISPR-knockout plasmid together with a bicistronic plasmid containing mAID-fused MCM10 cDNA. After drug selection and colony isolation, we successfully isolated HeLa mutant lines, in which mAID–MCM10 was depleted by the addition of indole-3-acetic acid, a natural auxin. The bicistronic all-in-one plasmids described in this report are useful for controlling degradation of a transgene-derived protein fused with mAID. These plasmids can be used for the construction of conditional mutants by combining them with a CRISPR-based gene knockout. View Full-Text
Keywords: auxin-inducible degron; conditional protein depletion; gene knockout; expression vector auxin-inducible degron; conditional protein depletion; gene knockout; expression vector
►▼ Show Figures 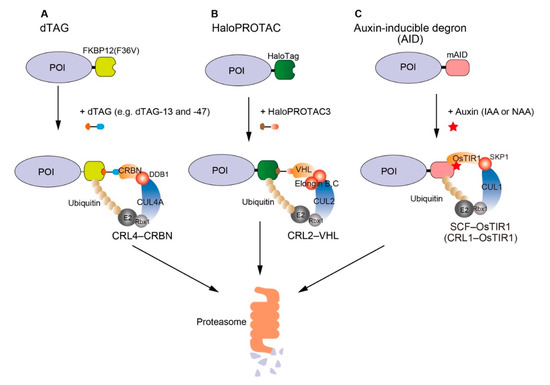